According to the dictionary definition of broken, are we “fractured or damaged”? As humans, do we need fixing?

Christians know that there is something wrong with the world, indeed. Even unsaved people mutter and wonder what in the world is going on. Why is the world like this? they ask. Why has it always been like this? they wonder.

I hear and read the word ‘broken’ a lot now in reference to this issue. The word has come into popular Christian use. Here are just a few  recent published essay titles-

Is it acceptable to use the word broken when referencing already-saved Christians? Or even non-saved people?

It’s my stance that it is not. As was stated so well here,

For Christians, it is vital that we be open-eyed and discerning about the destructive ways that language is being manipulated. We need to recover the biblical view of words …

We well know that language gives words meaning, but that meaning can be fluid. For example, the American definition of marriage, of a legal union between one man and one women, had been stable for centuries. The over the last few decades, marriage has come to mean any civil union between any number of people of any (or no) gender or sexual orientation.

Or this from the website Darrow Miller and Friends

In this example, Tolerance in the old definition meant “ability or willingness to tolerate something, in particular the existence of opinions or behavior that one does not necessarily agree with.” Nowadays the word tolerance has come to mean rejecting all moral absolutes, including biblical absolutes.

When we use important Christian words, we need to say what they mean, too. Just because we say the word sin, doesn’t mean who you are speaking to will have the same understanding of what sin is that you do. It seems basic, but that’s where we are now.

Manipulation of words to change perceptiopn or to catalyze movements is an entire academic field of study. It’s called Linguistic Anthropology. Satan changes word meanings in order to confuse both believers and non-believers, and to push forward his agenda.

I argued that a new religion has taken root in the West, and it advances by redefining words — vacating them of their true meaning, and hijacking them to serve new purposes. (Source)

… As John Stonestreet reminds us, “there’s a long history detailing the manipulation of language for the purpose of social control”. George Orwell described the process well in his book 1984. The language was forever being altered, “to make all other modes of thought impossible. … This was done partly by the invention of new words, but chiefly by eliminating undesirable words and stripping such words as remained of unorthodox meanings….” Source

The word broken is one of those words that is being used to change perceptions, in this case, to redefine sin. Broken can indicate anything that is massively fractured, down to only a little dented. Being only broken can mean-

The truth is, we are not broken. We are sinners WITHOUT righteousness. We are totally corrupt. We need HIS external righteousness. We are not just broken, but beyond repair. We’re dead! That’s why the Bible says when we’re saved, we are a new person, from a new birth, regenerated, born again, given a new heart. And so on.

We are not entities that need a patch or a fix or a tweak. Using broken instead of sinner allows wiggle room for seeing my sin as small. One might start our magnanimously seeing one’s sin as big, as the essay headline above, but if you see yourself only as broken, inevitably you’ll reduce your sin to only a minor indiscretion.

Secondly, we are not broken (in need of a fix). We must be remade completely! This is because we are thoroughly corrupt. Sin pervades us, our entire nature is one of sin. There is no corner of light in us, it is all darkness and evil. (Genesis 6:5).

Can a leopard change its spots? Can an Ethiopian change his skin? (Jeremiah 13:23). Can a lion become a vegetarian? No. Our essential nature is one of unholy acts in sin and evil intentions,a ll the time. We can adopt an external moralism but none of our actions will be pleasing to a holy God. (Romans 7:18,24; Ephesians 2:1,2). We must be made new. (John 3:7).

You were taught to put off your former way of life, your old self, which is being corrupted by its deceitful desires; 23to be renewed in the spirit of your minds; 24and to put on the new self, created to be like God in true righteousness and holiness (Ephesians 22-24)

and have put on the new self, which is being renewed in knowledge in the image of its Creator. (Colossians 3:10).

Now this might not seem like such a huge deal. Big woop, some words are being redefined. But you see, the latest hot evangelism training trend is to use this concept of brokenness as the basis for needing Jesus. It’s not true as the caption on the video below claims, that this world is characterized by brokenness. 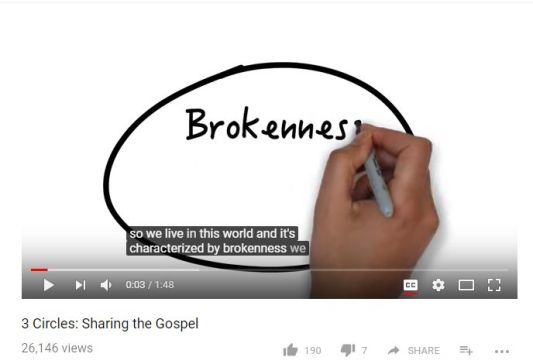 that the creation itself will be set free from its bondage to decay and brought into the glorious freedom of the children of God. (Romans 8:21)

The only thing we, the animals, and the creation itself can do is decay, because we are corrupt and enslaved to sin. That sounds more than ‘broken’ to me. Our very nature prevents us from righteousness. No fixing will do.

Be careful of the words you use. Know the important words of our faith, use them, and explain them. Be precise.