Part of this essay appeared on The End Time in 2010.

The Wayside Cross is a huge tradition in Canada and Europe, where it has abounded for over a thousand years. “In Quebec, and Europe, a wayside cross marks a place where the members of a community gather to meet and pray, and often commemorates an important moment in their communal history.” Charles Bourget reports that there are 3000 wayside shrines dotting the countryside in Quebec, however, many of them are falling into disrepair because the tradition is waning. I wrote at one time about the fate of one American Wayside Cross in East Greenwich RI.

Below, a wayside crucifix in Europe 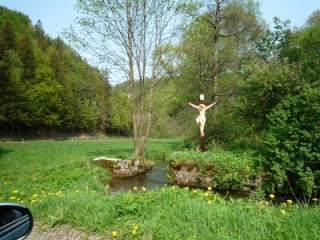 In America, the tradition never really caught on. If one does stumble upon a wayside cross, they are usually a cricifix- which represents an entirely different religion. They are seen occasionally, especially in central rural Wisconsin. Wayside crosses dot the landscape there. In Bedford NY, one was erected in 1936 and it was hoped that the sight of it would invite the prayers of the passersby. In 1922 East Greenwich, it was hoped by “those who placed this beautiful memorial to an exemplary life feel that it will indeed be a light by the way and a guide post to Heaven.” By and large wayside crosses are not seen much and those that do exist are under increasing challenge.

The point of the cross in public life is that it would point the way to Jesus. That upon seeing it, thoughts of Him and the Good News would ruminate in the mind, and through the strength of the Holy Spirit, those thoughts would germinate. For people seeing such displays, who have already heard the Good News, perhaps its sight would loosen the bonds around the heartstrings and their conviction would grow, as in the allegorical depiction of Christian at the Wayside Cross.

A wayside cross was a pivotal point in the very famous book Pilgrim’s Progress by John Bunyan, published in 1678 and has remained on the ‘bestseller list’ ever since, never having been out of print. The passage is below:

“He ran thus till he came at a place somewhat ascending, and upon that place stood a cross, and a little below, in the bottom, a sepulchre. So I saw in my dream, that just as Christian came up with the cross, his burden loosed from off his shoulders, and fell from off his back, and began to tumble, and so continued to do, till it came to the mouth of the sepulchre, where it fell in, and I saw it no more. Then was Christian glad and lightsome, and said, with a merry heart, ‘He hath given me rest by his sorrow, and life by his death.’ Then he stood still awhile to look and wonder; for it was very surprising to him, that the sight of the cross should thus ease him of his burden. He looked therefore, and looked again, even till the springs that were in his head sent the waters down his cheeks. Now, as he stood looking and weeping, behold three Shining Ones came to him and saluted him with Peace be unto thee. So the first said to him, Thy sins be forgiven thee;”

It is amazing that the sight of the cross should ease a person’s burdens, but it does, for the person who is ready to receive grace. For every individual on the planet, there comes that critical moment, upon which the eye falls to the cross and a decision is made either aye or nay. The cross to the unsaved does make one’s soul burn, satan would have it so. But in the process of that the soul-singe the cross is emblazoned on the mind and heart and soul, thereafter to linger as a brand. It stays there, to rankle. Opponents of Christ do not want that rankle, and therefore strive to remove the cross from all areas of life except homes and churches.

This article from 2011 by John Witte Jr., Director of the Center for the Study of Law and Religion at Emory University in Atlanta, Ga., is interesting: Lift High the Cross? Religion In Public Spaces

It made 6 points about court challenges to religious symbols in public spaces:

While not entirely convergent in their religious symbolism cases, the American and European high courts now hold six teachings in common.

Lift high the cross. Value it, present it, wear it, but above all, cherish it and obey it. We can and should beautify the Gospel that the cross stands for by our obedient and gentle adornment of obedient behavior because of it.

Why do I wait until the hottest day of the excessive heat warnings to use the dryer, sweep the front cement stoop, and bake muffins? #Doh!
You cannot pet sin, it will always bite you
EPrata photo
Nice summer sky tonight
Northern Ecuador, near Otavalo. This is a working ranch we stayed at
Follow The End Time on WordPress.com