I wrote a 3-part series on Mrs Wilkin, looking at her overall ministry here, here, here. It got long, so I promised to follow up with some specifics from her Rahab teaching lesson. This is that series. 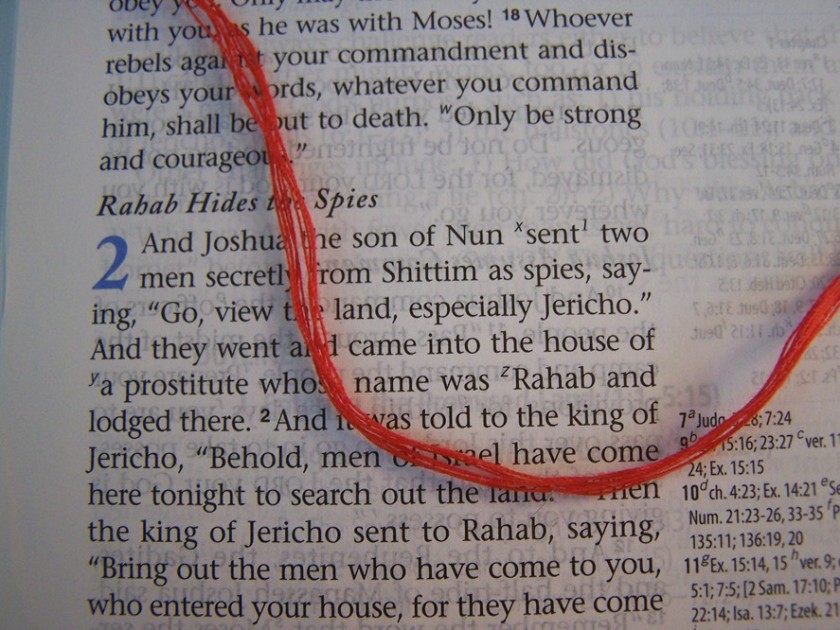 Mrs Wilkin teaches expositionally through books. This is good. She has taught through Joshua recently and also in 2014. In the section concerning Rahab, Wilkin preached a gender message. I am sad to report this. I was fairly shocked with Wilkin’s attitude through this lesson, which was angry, unethical, and improper for a woman of her maturity and standing. Let’s take a closer look.

A pertinent part of the 2018 talk is transcribed for you here. Wilkin said much the same things in her 2014 podbay lesson and the June 2018 Lifeway talk. One difference is that in the 2014 talk Wilkin said the names of the commenters with whom she disagreed. But in both talks Wilkin twisted the exposition to meet her own agenda, which was to elevate and redefine Rahab’s reputation away from the biblical characterization, downplay her prostitution as a sin, add a mythical backstory, and tarnish the men who dared to speak of her in a way Wilkin didn’t like.

Jen opens her lesson this way-

Quote:
Rahab has been handed down to us thru the centuries characterized with 2 words- she is  liar and a whore. That is the way she has come to us through the centuries. Even to today I was hard pressed to find commentaries that did not view her in that light. Listen to some of the things I read as I prepared to teach. (from 2014 podbay lesson).

Quote:
How has [Rahab] come down to us through history? She’s a woman and a Canaanite and a prostitute. She would have been a social outcast even among her own people. Here’s the way she is often referred to in commentaries. I’m not going to name the names of the commentators. … You know why she was a prostitute? Because she wanted to be one.(from 2018 Lifeway lesson)

Wilkin refers to Rahab several time as a ‘whore’:
History has judged Rahab as a liar and a whore. Is that how we should read her?

In the 30 or so Bible translations I looked at, the word prostitute or harlot was used almost equally. Not one used the word whore. Only Jen Wilkin called Rahab a whore. That was Wilkin’s choice, and of course, we know that it is a worse word, an inflammatory word.

The reason Rahab has ‘come down to us in history’ as a prostitute is because God in His wisdom inspired the writer to write it that way. It is a fact. She was a prostitute. That was her profession. Lydia was a dyer of purple, Moses was a shepherd. Rahab was a prostitute. It’s a plain fact, but Wilkin spends a good deal of time in her lesson on this topic, as we will see.

Quote: Here’s the way that she’s often referred to in commentaries. I’m not going to name the names of the commentators, but can I just be honest with you? Male commentators can be super hard on female Bible characters. Abraham can take his wife over to Pharaoh’s house and leave her there for several weeks twice basically. Abimelech and Pharaoh. And we’re like, “But you know what? It’s cool.” And then the women, it’s like, “Mmm. No. You know why she’s a prostitute? Because she wanted to be one.”

It is a massive generalization to claim that ‘male commentators’ are ‘super hard’ on female characters. Her gender bias is showing here. In addition, Wilkin is claiming that the male commentators are biased in how they write their commentaries, that they see male vs. female and write about the females in a less than honest way. It may or may not be so. If one finds bias in a commentary then a teacher should just move on and not disdain their work by publicly mocking it, which was the tone of Wilkin’s voice as she made the statements. So far she hasn’t taught the text yet.

Matthew Henry, we can give his name out cause he’s long dead. And this does not mean these men are terrible commentators, it’s just a sampling for you. I said I wasn’t gonna say their names, I lied. He’s describing her taking them up on the roof and hiding them under the stocks of flax and he says, “By these stocks of flax it appears that she had at least one of the good characters of the virtuous woman. However, in others of them, she might be deficient. That she sought wool and flax and wrought willingly with her hands. From this instance of her honest industry, one would hope that whatever she had been formally, she was not now a harlot.”

What on earth is the matter with that assessment? One would hope the woman was not still a harlot. And the flax on the roof is mentioned in Proverbs constantly as a worthy industry for a woman.

Of course we’re appalled at the thought of a woman selling her body for money. Who wouldn’t be! It’s a degrading and awful profession. It’s also a sin. Sexual sins are worse than other sins, according to 1 Corinthians 6:18.

And then this is from a book called All The Women of the Bible by a man whose name I very much want to tell you, because I’ve since read other things he said about other women of the Bible. He says this about Rahab: “Like many a young girl today, perhaps she found the restrictions of her respectable home too irksome. She wanted a freer life, a life of thrill and excitement away from the drab monotony of the home giving her birth and protection. So high-spirited and independent, she left her parents, set up her own apartment with dire consequences.” Yeah, right, Herbert. (audience laughs). … History has judged Rahab as a liar and a whore. (from 2018 Lifeway video).

Jen’s voice deepened when she read ‘dire consequences’. It is dire when a woman finds she must turn to selling her body to survive. Is Jen saying it isn’t dire? Here her mocking became hardened. That was sad, not only because one should simply teach the text, not attempt to educate the audience on gender politics suspected or imagined from other commenters, but because that is what the text says.

History hands Rahab the moniker liar and prostitute because that is what the eternal word has named her. Is Jen Wilkin disagreeing with the inspiration of scripture and the characterization of Rahab this way? She spends time mocking commenters who relate Rahab’s profession as it was stated in the Bible, as if the mean and misogynistic men had made it up. She chided the commenter for speculating on how Rahab might have became a prostitute, but Wilkin does the exact same thing in both her lessons, speculating on Rahab’s backstory.

I think we’ve grown in our understanding of things. If you were to google the name Rahab right now, do you know what would come up for you? A list of non-profit organizations. And what do you think that they’re involved in? Freeing women from human trafficking.

Wilkin choked up and held back tears at this point. We’ve ‘grown’ in our understanding of things? What things? That we should no longer believe that prostitution is bad? That lying is OK? Here Wilkin goes off on a second tangent (the first was mocking commenters who identify Rahab as a prostitute) and here she spends time explaining about the backstory of Rahab as an unwillingly trafficked youth,  which isn’t in the Bible, and tying it to today’s Googling of her name as the inspiration for social justice causes. Is that what you want from a credible Bible teacher?

How do you think a woman gets to be a prostitute in ancient Canaan? I mean, it could be that she chose the profession, but I’ve heard precious few stories in my entire life that would indicate that a woman chooses that, free of any power dynamic, free of anything societal that’s going on. And in fact, we even know from history that it was a common practice in Canaan and other ancient cultures, that when a family could not pay a debt they often had to sell a daughter. It seem far more likely to me that find Rahab in the state that we find her in, not because she wanted to be a prostitute, but because that is where life forced her to be.

In neither of her lessons, the 2014 or the 2018 that I listened to, I never quite understood Wilkin’s emphasis on softening Rahab’s profession with a mythical backstory and including societal pressures and human trafficking into the lesson as potential motivators for Rahab’s profession, and what that had to do with what she had said would be the point of her lesson: looking at why Joshua sent the spies in the first place.

Others who commented under the 2018 Youtube Lifeway video were similarly confused at Wilkin’s emphasis. You can see I’m not the only one who saw Wilkin’s obvious anger.

La Di
So why concentrate on commentators when we can read it for ourselves? I don’t understand the anger at flawed men with flawed opinions. It’s not really relevant to the story.

Shelie Martin
Jen Wilkins cannot redefine Rahab. She is not God and she should not be redefining anything in God’s Word.

In part 3 we will look at Jen Wilkin’s academic ethics and her situational ethics. It’s not dry, I promise. Stay tuned.

3 thoughts on ““If I ever meet him I’ll probably sock him in the face” said Jen Wilkin, Redefining Rahab, part 2”

The ALabaster vial full of courage
The alabaster via full of courage
Faith's Check Book, Daily Entry, C. H. Spurgeon
Vintage Thermometer one of the cute finds today at my favorite vintage store. https://elizabethprata.wordpress.com/2021/07/30/the-special-store-haul/
There are believers who are false. That is, they are not saved. There are two classes of these non-believer believers: those who know they're not saved but have come in to secretly spy out the church doings in order to purposely corrupt the true believers (Galatians 2:4). And there are non-believing believers who don't know they're not saved. They think they are, but they're not. They will be surprised on judgment day. (Matthew 7:21).