In Part 1 I introduced this three-part series with some of the things I enjoy about Jen Wilkin, and also discussed how I go about reviewing a nationally known teacher’s doctrine, teaching, and lifestyle. In part 2 I took a look at Mrs Wilkin’s now-infamous menstruation eisegesis lesson, and this part 3 I will look at whether she actually lives out her proclamation that she is a complementarian woman, some other discernment issues, and conclude part 3 with a look at what the Lord means when He says do not move the boundary stones.

I found Pastor Allen S. Nelson’s definitions helpful. In his essay reviewing the Christian documentary By What Standard, here, he said,

Complementarianism is the Biblical understanding that men and women complement one another. They are equal before God but each has his or her specific roles in the family, church, and society at large. A major push in the SBC over the last few years has been toward women preaching in the main Sunday morning service. … The argument goes that in order for women to reach their full potential, and in order to have less cases of abuse, they must be allowed to fill preaching and teaching roles in the church.

This is Jen Wilkin’s stance, exactly. She said in a 2014 podcast,

We’ve lost a foundational thing that is really important for us believers. I get it. There’s a lot of chaos in the culture right now surrounding gender. We feel like we have to choose between two extremes. One extreme is, men & women are completely interchangeable, and the other extreme is completely mutually exclusive, that they share nothing in common. I want to remind you tonight of the very first word on gender in scripture, and it occurs in Genesis chapter 1 and in chapter 2. I’ll just give you the highlights really fast.

[Here, Wilkin relates naming story of animals from Genesis 2. I didn’t transcribe it due to length]. She tells what Adam is thinking,

as he sees all the animals he is thinking ‘not like me’. When he sees Eve he says she is like me, bone of my bone flesh of my flesh. She is same of my same. She shall be called woman, from the word ish, which is ‘from man’. She shall be called ‘like me’ because she is from me. You know what God’s first word on men and women is? NOT ‘they are different’, THEY ARE THE SAME. We have to reclaim this. You know why? Because the very first step in degrading someone, objectifying someone is to look at them and say ‘not like me’. Source, Joshua week 3: Rahab Redeemed, from Flower Mound Women’s Bible Study | Podbay 2014

Even the liberal-ish 9Marks notes a concern with Wilkin’s version of complementarianism,

For instance, writer and speaker Jen Wilkin talks at length about design differences (broad). She is unafraid to fill in the blanks on “Men are ___” and “Women are ___” and builds her argument for single-sex learning environments off of those differences. Yet she also pushes hard at programmatizing female leadership in the church without necessarily defining the nature of that leadership (narrow).

Easton’s Bible Dictionary defines hypocrisy as “One who puts on a mask and feigns himself to be what he is not; a dissembler in religion.”

It grieves me to say this, but Jen Wilkin is a hypocrite.

Her own church adheres to what they call “A generous complementarianism” and outlines standards for teachers in: “Teaching Environments in the Institute, High School, Ministry, Steps and Recovery Groups:”

Gender-specific groups are led by a leader of the same gender. Men lead men’s groups, and women lead women’s groups. Mixed-gender groups are led by both a man and woman. In mixed-gender group leadership we expect for there to be a co-discipleship relationship between the man and the woman. Co-discipleship in the group doesn’t mean that male and female leaders are interchangeable or lead in the exact same way, but as co-disciplers, the man and the woman operate in their roles according to gifting. Both men and women may serve as group coaches, group ministers and group leaders.

Jen Wilkin regularly does NOT adhere to her own church’s standards. She has consistently appeared solely on stage at conferences and in other venues teaching to men and to mixed gender audiences. 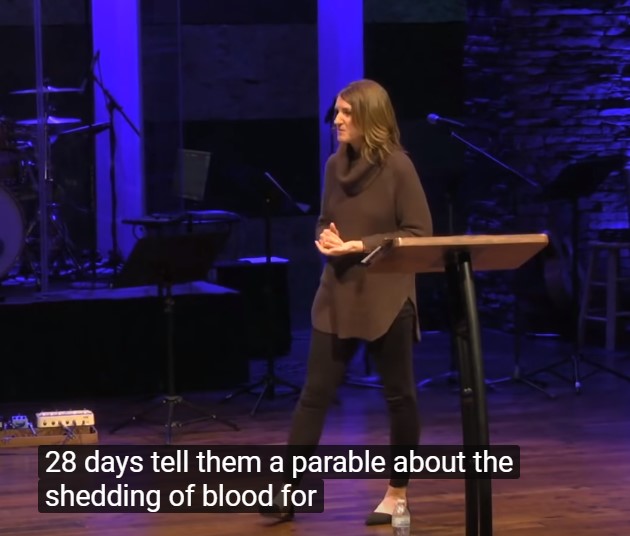 Worst of all, she usurped the Sunday message at Greear’s Summit Church by choosing to participate in a Q&A interview between her and Greear on March 24, 2019.

Jen Wilkin’s other point delivered consistently to male and mixed audiences is that hiring women and/or installing them in positions of authoritative teaching is not a slippery slope. Oh, but it is, it IS. She has shown this by her decisions to teach men in authority, violating scripture in 1 Timothy 2:12. She herself is on that slope! 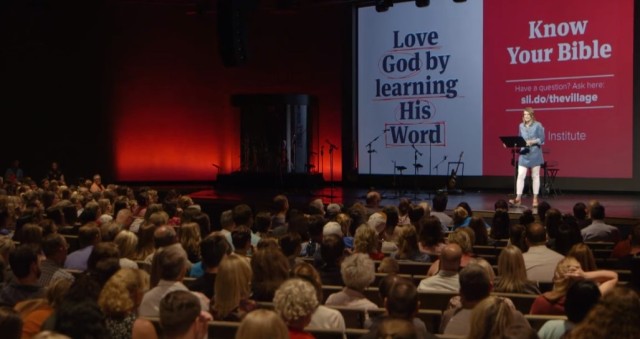 Falsity and apostasy are incremental. Satan takes territory by degrees, patiently, word by word, woman by woman, decision by decision. The camel’s nose is under the tent.

The camel’s nose is a metaphor for a situation where the permitting of a small, seemingly innocuous act will open the door for larger, clearly undesirable actions. An early example is a fable printed in 1858 in which an Arab miller allows a camel to stick its nose into his bedroom, then other parts of its body, until the camel is entirely inside and refuses to leave. In a 1915 book of fables by Horace Scudder, the story titled The Arab and His Camel ends with the moral: “It is a wise rule to resist the beginnings of evil.”

1. Poor hermeneutic. Wilkin’s emphasis on gender and pushing for opportunities for women to teach (not exercise any OTHER of the gifts, just teach or be on hired staff) is starting to twist her hermeneutics. I saw this in each of the messages I watched, including a Bible teaching from 2014 supposedly expositing Joshua, the Rahab segment. Her teaching is off. I would not trust it and sadly do not recommend Jen Wilkin’s Bible studies.

2. Discernment. Jen is partnering with and promoting questionable/false teachers. She is increasingly speaking with and lumped in with Kelly Minter, Christine Caine, Priscilla Shirer, and Beth Moore. Also Jackie Hill Perry. See one example here. Another is the Lifeway Women’s Leadership conference coming up in February 2020, 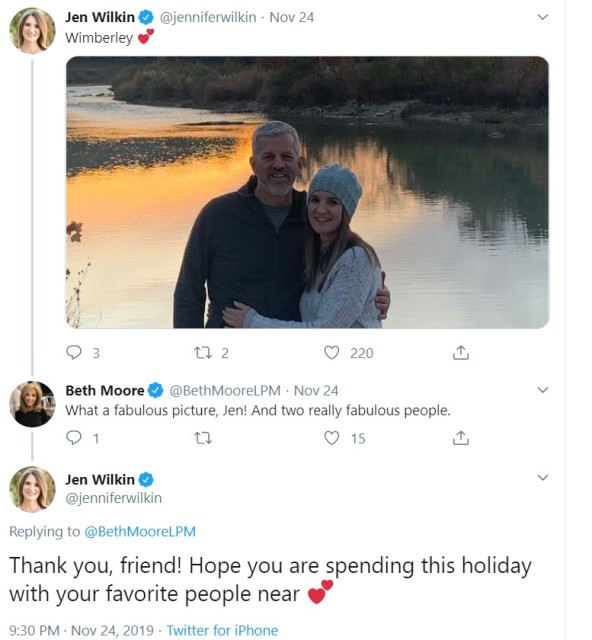 3. Attitude. Titus 2:3a says, Older women likewise are to be reverent in behavior
Wilkin is on record as being angry and being snarky. Greear said in his introduction about her that he’d first heard of her as ‘The Bible Girl’ and talked with her, testing her for her biblical knowledge, and “she’d always give back a snarky answer, to let me know that she knew a whole lot more than I did about whatever I was asking about, so I learned to be very respectful around her…”

While Wilkin exudes a gravitas, intelligence, and an authority when she speaks, in other places she demonstrates a barely suppressed anger, a vitriol that in one case clearly came through. She actually called one noted and credible theologian “a pervert”. It was uncharitable in the extreme. I don’t know why the two faces of Eve, but it’s troublesome.

Show yourself in all respects to be a model of good works, and in your teaching show integrity, dignity, 8and sound speech that cannot be condemned, so that an opponent may be put to shame, having nothing evil to say about us. (Titus 2:7-8).

4. Omissions. As mentioned briefly, Wilkin does not teach the role of women as submissive learners, content to serve at home and humbly in the church. She does not teach women mentoring other women. She focuses to almost an exclusion of the teaching and positions of women in “visible leadership.” Omissions are harder to detect but once you realize she gives only part of the story of our roles and joys, you can’t forget it. She is unduly entranced with gender politics and it’s affected her teaching and her own walk.

The princes of Judah have become like those who move the landmark; upon them I will pour out my wrath like water.

What is meant here about moving the boundary stones? In the literal sense, as Jamieson Fausset Brown Commentary describes the Law from Deutronomy 19:14,

Though gardens and vineyards are surrounded by dry-stone walls or hedges of prickly pear, the boundaries of arable fields are marked by nothing but by a little trench, a small cairn, or a single erect stone, placed at certain intervals. It is manifest that a dishonest person could easily fill the gutter with earth, or remove these stones a few feet without much risk of detection and so enlarge his own field by a stealthy encroachment on his neighbor’s. This law, then, was made to prevent such trespasses.

In the spiritual sense, Matthew Henry’s Commentary says of the shifted boundary stones,

God has given them his law, to be a fence about his own property; but they have sacrilegiously broken through it, and set it aside; they have encroached even upon God’s rights, have trampled upon the distinctions between good and evil, and the most sacred obligations of reason and equity, thinking, because they were princes, that they might do any thing, … Or it may be understood of their invading the liberty and property of the subject for the advancing of the prerogative, which was like removing the ancient land-marks. Henry, M. (1994). Matthew Henry’s commentary on the whole Bible: complete and unabridged in one volume (p. 1474). Peabody: Hendrickson.

‘Invading liberty to advance a prerogative’…like women teaching men. Jen Wilkin’s teaching has been reduced to moving the boundary stones and advancing the egalitarian agenda by steady encroachment. This is my conclusion.

It is heartbreaking. A young woman in my life who had heard of the menstruation video asked me “Who can I follow? What is going on?” Her voice was full of upset and confusion. Older women are supposed to be helping  “train the young women to love their husbands and children, 5to be self-controlled, pure, working at home, kind, and submissive to their own husbands, that the word of God may not be reviled.” (Titus 2:4-5). We are not supposed to be confusing them, clouding the issue with egalitarian double speak, and making women who quietly serve behind the scenes feel like less than those marching up and down stages telling men what they should do with their female congregants.

I’m upset to have to report these things. I don’t like it. No one likes to see that what they thought was a trusted woman, a solid ministry, isn’t. I ask anyone reading this not to be gleeful about it. Please don’t be sarcastic about it. Please don’t link this to places that trumpet and glory in the sliding down of a once-trusted woman. It’s heartbreaking. The goal is to snatch her from the fire.

Her pastor, Matt Chandler, is NOT doing Jen Wilkin well by allowing and promoting this form of egalitarianism. Jen herself isn’t helping her cause with the Lord. God said those who move the boundary stones will have wrath rained down on them. It isn’t cause for snark or sarcasm, but tears and prayer.

Thank you for reading.