Israel’s borders are small, and space is at a premium. Nazareth today, in the district of Galilee, is a bustling city of 77,000. Nazareth is known nowadays as the Arab capital of Israel, populated mainly by Muslims, who comprise 70% of the religious demographic there, Christians being 30%.

The town of Nazareth is located in Lower Galilee, just south of Upper Galilee, as one might expect. Upper Galilee borders Lebanon. The Golan Heights and Jordan are to its east.

We think of the Nazareth district like we may think of the rest of the Middle East; arid, dry desert. It was actually beautiful and lush. Here is what the terrain is and was in Jesus’ day-

Most of Galilee consists of rocky terrain, at heights of between 500 and 700 m. Several high mountains are in the region, including Mount Tabor and Mount Meron, which have relatively low temperatures and high rainfall. As a result of this climate, flora and fauna thrive in the region, while many birds annually migrate from colder climates to Africa and back through the Hula–Jordan corridor. The streams and waterfalls, the latter mainly in Upper Galilee, along with vast fields of greenery and colourful wildflowers, as well as numerous towns of biblical importance, make the region a popular tourist destination. Source

The Jezreel Valley is to its south, and cuts like a slash across the landscape. You can see how far north Nazareth is and how far it is from Jerusalem, about 100 miles.

In Jesus’ day though, Nazareth was a podunk town of around 200-500 souls, including the family of Jesus: Joseph, Mary, Jesus, James, Joseph/Joses, Judas/Jude, Simon, and unnamed sisters. Though we read in Matthew 2:23, And he went and lived in a city called Nazareth, so that what was spoken by the prophets might be fulfilled, that he would be called a Nazarene, the Old Testament never mentions Nazareth!

Mary and Joseph were living in Nazareth but their origins emanated from noble Bethlehem, city of David. They were required by Roman Law to go there when the census was to be taken. Yet when they finished, they returned to Nazareth. (Luke 2:39). And there they dwelled after the return from Egypt, Jesus growing in wisdom and stature, in a backwater so forgotten the Pharisees mistakenly thought no prophet ever came from that podunk little town they so readily dismissed.

In fact, Jonah had come from the area, Jonah was from Gath-Hepher, 2-3 miles from Nazareth in Galilee. Jerome called Jonah’s town of Gath-Hepher in his Roman Times Commentary on Jonah ‘as an inconsiderable village,’ and likely all the little villages nearby, including Nazareth, were just as “inconsiderable.”

The town had a poor reputation, as seen when Nathaniel said, Can anything good come out of Nazareth? (John 1:46).

For all that, it was industrious and pretty, at least to the 200-500 folks living there.

All evidence supports the view that Nazareth’s primary industry was agriculture, including the production of wine and olive oil. The slopes supported the growing of wheat and barley. The soil to the south permitted the cultivating of vegetables. The village, like many throughout the ancient Mediterranean, was likely self-sufficient, though poor.

The lack of remains from the period suggests that houses were constructed of local uncut stones and mud with thatch roofing. The town receives no mention in non-Christian sources from the Roman Period. It likely was known only at the local level, and perhaps enjoyed little esteem even there (John 1:46). Source: The Lexham Bible Dictionary.

There is a remarkable book I have access to in my Logos software, called “Earthly Footsteps of the Man of Galilee: being original photographic views and descriptions of the places connected with the earthly life of our Lord and His Apostles, traced with note book and camera. 2-vol. set (Complete),Vincent, Bishop John H.; Rev. James W. Lee; R. E. M. Bain, published by N. D. Thompson Publishing Co.; “News of the World”, 1894.”

Phew, they were really into long titles in the 1800s!

The caravan of travelers retracing the footsteps of the Messiah took photos of everything, with voluminous narration of the scenes. Since Israel changed little from Jesus’ days until just after WWI, the scenes below looked very similar to the ones Jesus would have seen as he walked the earth at Nazareth. Here they are, and enjoy:

‎Here is a charming picture, probably the most beautiful to be gained from any point of observation about Nazareth. It is a restful place, thoroughly in keeping with the silent years of our Lord’s life. There is not much stir. There is no bustle or noise. The people walk about quietly. The mountains which encircle the town, rising toward the heavens, are in themselves restful to the eye, and the whole town seems friendly to a life of meditation.

It is as different and distinct from other towns of the same size in Palestine as though it belonged to a different country. There is more of devotion in the churches, more of dignity and taste in the bearing of the people. The beautiful, tender and sympathetic life of our Lord seems to have been shared by the people of the place.

As we looked down upon this lovely town from the Latin Mount in the early morning of the 7th of May, 1894, the air was soft, the sky clear and deep, and the very olive groves and vineyards, the distinct mountain outlines, the bending heaven and the charming atmosphere seem to suggest to us the life and ministry of the Christ we honor. A little to the left in the picture we see our tent. The people standing about it seem like toys. The building inclosed by the square wall is the Greek church, and a little below it to the right we see Mary’s Well, the water of which flows from underneath this Greek church.

Fair Nazareth! Home of the sweet mother and lovelier Child; of the growing Boy and dawning manhood; of the bold Prophet and mighty wonder worker; of the holy sacrifice, the mighty Savior of humanity! 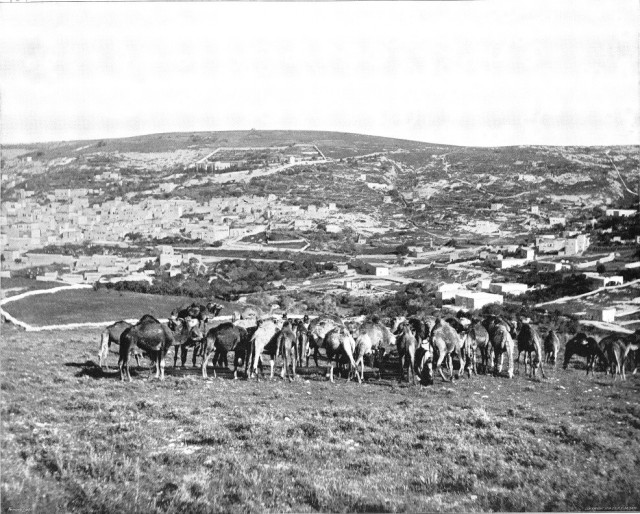 ‎From Ain Karim in the hills of Judea we pass seventy miles to the northward to the home of Mary on the uplands of Galilee. From the roof of the English Orphanage we look down upon the beautiful town of Nazareth, a place of ill repute in the olden time, but now, next to Bethlehem and Jerusalem, the most sacred of all the cities in the world, because here for nearly thirty years the life of our Lord was spent.

To answer Nathaniel’s question ‘Can anything good come out of Nazareth?’ The answer is YES. The best Good, the only Good, the Good, Good God and Savior, Jesus Christ!

Thirty days of exalting Jesus through selected verses with pictures representing the prophecy, life, death, resurrection, and Second Coming of our Savior. More information and background on this series, here Day 1: The Virgin Shall Conceive Ligonier: A Shoot from Jesse’s Stump: Devotional Matthew Henry’s Commentary on Isaiah 11:1 All the Named Men of the Bible: Jesse This episode is also available as a blog post: https://the-end-time.org/2022/11/27/advent-thirty-days-of-jesus-day-2-he-will-come-3/