These past couple of weeks have been rough in our corner of the church. Rachel Held Evans’ passing caused so much grief for her followers and her detractors alike. The display of hatred and bitterness of her followers came after, toward anyone daring to speak a word against their prophetess (their words). It was hard to watch.

Then there was Beth Moore’s craven yet politically manipulative comment that she is preaching on Sunday at a church for Mother’s day and followers of THAT false prophetess came out of the woodwork to proclaim their glee in doing the same, even at Southern Baptist Convention churches, whose statement of faith had traditionally rejected this kind of activity.

Then there was Owen Strachan’s piece biblically outlining why a woman preaching the sermon in church is forbidden by God, and Moore’s self-serving rebuttal to it, her rising anger displayed wantonly for all to see, along of course, with her many followers yapping at Stachan’s heels for his daring to speak against their prophetess.

I’ve only mentioned two women but their combined following just on Twitter alone topped one million people. And their blogs, events, book sales have much greater reach than that, sadly. A huge segment of the western Christian world have been impacted in some way by just those two teachers.

So, it’s been turbulent on social media this week. It reminded me of the Riot at Ephesus where the idol Artemis was enshrined in one of the ancient world’s largest temples, one of the Seven Wonders of the Ancient World in fact. Paul’s Gospel preaching started to have an impact, and the merchandise sales began to decline. A silversmith named Demetrius made silver shrines of Artemis and brought in a lot of business for the craftsmen there. He claimed that Paul was “leading the people astray”.

The Riot in Ephesus Acts 19:23-27
23 About that time there arose a great disturbance about the Way. 24 A silversmith named Demetrius, who made silver shrines of Artemis, brought in a lot of business for the craftsmen there. 25 He called them together, along with the workers in related trades, and said: “You know, my friends, that we receive a good income from this business. 26 And you see and hear how this fellow Paul has convinced and led astray large numbers of people here in Ephesus and in practically the whole province of Asia. He says that gods made by human hands are no gods at all. 27 There is danger not only that our trade will lose its good name, but also that the temple of the great goddess Artemis will be discredited; and the goddess herself, who is worshiped throughout the province of Asia and the world, will be robbed of her divine majesty.”

In any case, the people were gullible and became, as the verse says, “furious.” The Greek word for this fury is ‘thumos’. Strong’s concordance explains:

At Ephesus, the people filled the arena and shouted in unison for about two hours: “Great is Artemis of the Ephesians!”

That is stunning. The theater there could hold up to 25,000 spectators. You know how loud it gets when just the school gymnasium at school is filled for a pep rally with a few hundred students, and everyone is stomping on the bleachers. Imagine thousands upon thousands of people creating a ruckus and shouting in unholy fury. It’s also stunning that they did it for two hours. That kind of shouting and rage is difficult to maintain at those intense levels. It seems that satanically inspired fury can be maintained for that length of time with no problem.

I liken the ruckus of social media over Rachel Held Evans’ death and Beth Moore’s tweet as similar to the riot at Ephesus; intense, rage filled, sustained, with the followers of those false teachers claiming that those trying to bring the truth were leading them astray. But at the root of it is money. It always is.

The lesson here in looking to that passage of scripture in Acts is that we should never doubt the intense love people have for their idols and the lengths to which they will go to protect and defend them. Never underestimate the power that greed has over those who teach falsely, for their motivation is money. (2 Peter 2:3). Don’t miscalculate the wrath that those in the cottage industries surrounding the idol and financially benefiting from the idol will go to preserve their income. Always remember that those who follow false teachers, false gods, and idols will say that anyone bringing the truth is actually lying and leading the people astray.

It’s been an upsetting week, many people doing and saying unpalatable things. I don’t know the Lord’s reason for ordaining RHE’s number of days to end at 13,505 or why He is allowing Beth Moore to continue polluting the church and blaspheming His name into her 60th year. His will be done. The good news is that we have glory to look forward to. We will sing and worship in truth and unity, with not one blot, not one jot, not one tittle of falsity anywhere. No false teachers will skulk in any corner, no false prophetess will lead anyone astray, and no merchandising of the people will ever happen. Glory will be sparkling pure, clean, and wholesome.

Then I saw a new heaven and a new earth, for the first heaven and the first earth had passed away, and the sea was no more. 2And I saw the holy city, new Jerusalem, coming down out of heaven from God, prepared as a bride adorned for her husband. 3And I heard a loud voice from the throne saying, “Behold, the dwelling place of God is with man. He will dwell with them, and they will be his people, and God himself will be with them as their God. 4He will wipe away every tear from their eyes, and death shall be no more, neither shall there be mourning, nor crying, nor pain anymore, for the former things have passed away.”

5And he who was seated on the throne said, “Behold, I am making all things new.” Also he said, “Write this down, for these words are trustworthy and true.” 6And he said to me, “It is done! I am the Alpha and the Omega, the beginning and the end. To the thirsty I will give from the spring of the water of life without payment. 7The one who conquers will have this heritage, and I will be his God and he will be my son.” (Revelation 21:1-7) 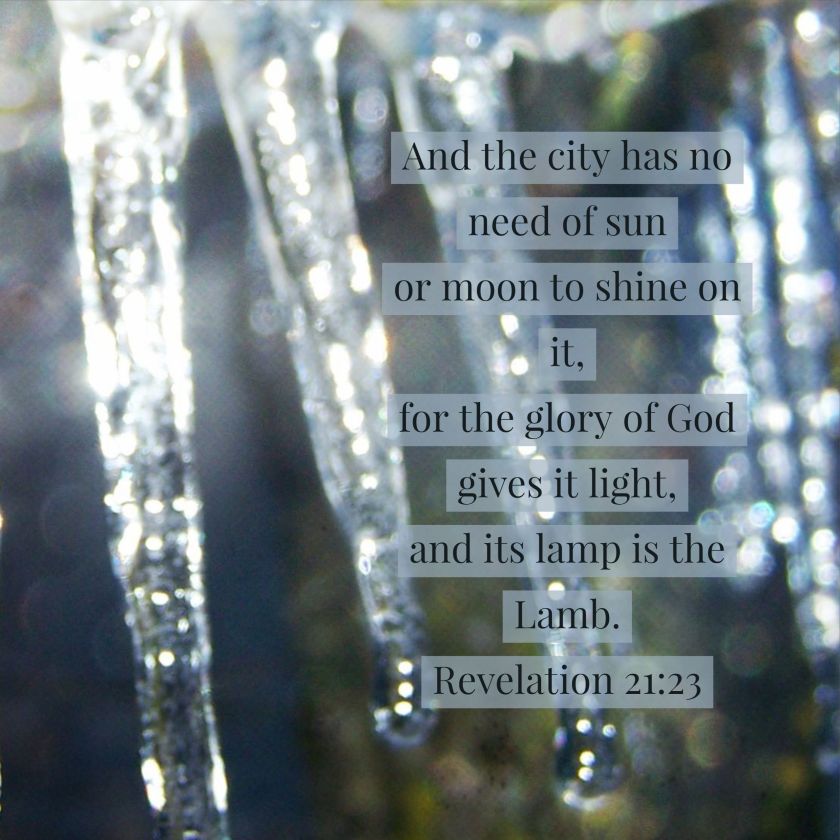 I was without excuse
Faith's Check Book, Daily Entry, C. H. Spurgeon
OK, in acknowledgement at last of what's going to happen in a few short hours, (23 and counting), I unearthed my lunch bag to get ready for packing a lunch as I go back to work Monday. I also acknowledge this is probably going to happen tomorrow (and for the next 190 work days)-
Sunday Brunch. I go back to work tomorrow after a blessed and relaxing summer off from school.