The holiness of God cannot be plumbed to its heights. We have no real conception of how Holy God is. Only Isaiah and Ezekiel (Old Testament prophets) and Paul and John (New Testament Apostles) really have a notion. They saw heaven or were given a vision of it. When Isaiah saw God on His throne, and understood his own sin in comparison, he said he was “undone” and fell to the ground.

So just as God’s holiness is infinite and unreachable in its limits, so is sin. I think we really have no idea of the extent of sin, its ugliness, and its infinite abyss. Just when you think sin can’t possibly get any worse, it does. It goes lower, gets worse, and continues on through its bottomless depths.

I’ve written several times about Beth Moore’s desire to preach at a pulpit, to men, with authority. See just two examples with links below. Over time, this desire has defaulted into a de facto reality. She tweeted this week in response to a woman boasting that she was preaching 3 Sunday services in a SBC church, Moore in reply said she herself was “doing” the Sunday service on Mother’s Day in Tomball TX, her hometown.

Older women likewise are to be reverent in behavior, not slanderers or slaves to much wine. They are to teach what is good, 4In this way they can train the young women to love their husbands and children, 5to be self-controlled, pure, managers of their households, kind, and subject to their own husbands, so that the word of God will not be discredited. (Titus 2:3-5)

Sadly, Beth Moore’s failure to rebuke and train the young woman but instead applaud her for her decision to preach, and in fact celebrate her own sin, fails the Titus verse completely. Moore is teaching women to usurp, not be self-controlled, pure, and godly women at home, as commanded.

When Dr. Owen Strachan, (pronounced Stran, rhymes with man) Associate Professor of Christian Theology at Midwestern Baptist Theological Seminary, Director of the Center for Public Theology, and Senior Fellow of the Council on Biblical Manhood & Womanhood, wrote a biblical and clarifying essay on Moore preaching. Moore, who “took a doctrine class,” berated him publicly.

Her tweet contained nothing of a teachable spirit. It was haughty and displayed none of the humility and meekness Jesus demands from His people. Then as she stewed some more, she admitted she was “going off like a bottle rocket,” thus failing the command for teachers to be “self-controlled.” More tweets ensued.

But that is what happens when a person rebels against scripture. They descend further into a depraved mind and then gather others to do the same, then applaud them for it. In fact, the entire situation is one that the Bible warns will happen with ungodly people. Romans 1:28-32,

And since they did not see fit to acknowledge God, God gave them up to a debased mind to do what ought not to be done. 29 They were filled with all manner of unrighteousness, evil, covetousness, malice. They are full of envy, murder, strife, deceit, maliciousness. They are gossips, 30 slanderers, haters of God, insolent, haughty, boastful, inventors of evil, disobedient to parents, 31 foolish, faithless, heartless, ruthless. 32 Though they know God’s righteous decree that those who practice such things deserve to die, they not only do them but give approval to those who practice them.

Why the Lord is allowing Beth Moore to engage in behavior that stores up wrath for herself is His will alone. But woe to Beth Moore on the day she stands before a holy God and is called to account.

Please read the following essays I wrote for more information on the devastating results that occur when we buck God’s word, especially when it comes to His Divine Order.

Beth Moore: A Type of False Prophetess like the Jezebel of Thyatira?

Examples of Beth Moore preaching to and with men. Notice in her tweet she had said she only has preached at “SBC churches, like, 15 times”. But there are also plenty of other churches she has preached in…to men…against the will of God … as set in His word… 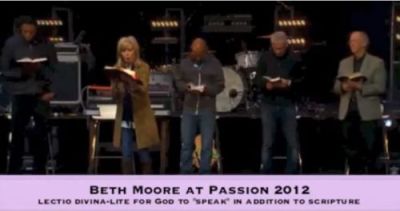 Below, Moore getting angrier and angrier at the rebuke she has received. She tweeted the following, which sounds more like a pre-teen arguing with her parents than a 40 year teacher of the Bible who has learned the required conditions of gentleness, humility, and self-control. Also, her Legalism is showing. Godliness is not a ratio of good outweighing the bad.

One thought on “Beth Moore has a Lot to Answer for in Normalizing Women Preaching/Teaching to Men, again”