This post first appeared on The End Time in June 2012

If the homosexual lobby is to be believed, every other person you bump into is gay. At work, at home, in town, in the city, in church, the more vocal activists in the lobby make it seem like people who self-identify as homosexual or lesbian are a major portion of the population.

They scream about rights, and their civic due, and not being marginalized any more like any other large minority group, such as African Americans. Black people as a major minority rose up in the 1960s to claim their civil rights, the gay lobby says, and homosexual lobby now makes the same claims. Homosexually-oriented people are elected to office, serve as community leaders, even preach from pulpits. There is a homosexual character on most sitcoms now, either as a regular character or as a recurring character. Homosexual references are made on scripted shows and on reality television shows, movies, and books. Christian colleges have gay support clubs now. We are literally saturated with the notion that homosexuality is the norm. Heck, even the animals do it, so it must be normal, right? 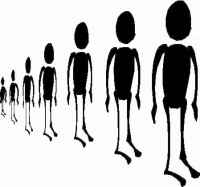 No. We can’t believe the numbers. They’re a crock.

“Americans Have No Idea How Few Gay People There Are”
“One in ten. It’s the name of the group that puts on the Reel Affirmations gay and lesbian film festival in Washington, D.C., each year. It’s the percent popularized by the Kinsey Report as the size of the gay male population. And it’s among the most common figures pointed to in popular culture as an estimate of how many people are gay or lesbian. But what percentage of the population is actually gay or lesbian? With the debate over same-sex marriage again an emerging fault line in American political life, the answer comes as a surprise: A lower number than you might think — and a much, much, much lower one than most Americans believe.”

So, what are the numbers? Well, Americans believe a quarter of the population is gay. The true number is about 4% and is probably probably closer to 2%. A 2011 report by the Williams Institute on Sexual Orientation estimated that 4 million adults identify as gay or lesbian, representing 1.7% of the population over 18. (source)

That is some very successful perception-altering on their part. So how is it that the homosexual lobby has made it seem like you can’t swing a cat in the Bible Belt without hitting a queen or a dyke? Because of this.

Bunheads is (was- it didn’t last) a new ABC Family show by the producers of Gilmore Girls. I never saw the tv show Gilmore Girls but every news story I read about Bunheads identifies the show that way so I will too. Bunheads is the nickname for ballerinas, and the show that made its debut last Monday is touted as a new family oriented entertainment.

I saw the pilot and I liked it. I thought the writing was sophisticated and witty, the show was emotional without being sentimental, and I put it on the list for future watching.

So what is my concern with the show and how does it relate to the vastly overestimated homosexual numbers? Here:

At one point toward the end of the pilot episode, which is on ABC Family I remind us all, the mom-in-law character was having a heart to heart talk with her new daughter-in-law. The girl had just married the mom’s son and had moved into their home in a town called Paradise.

The scene took place in a roadhouse toward the end of the show, a show in which constant references had been made for the last 90 minutes to the smallness of this rural seaside town. It is small. There is no movie theatre. It has just about one store. (Giving directions to a newcomer- “Go to Main Street, turn left, and look for the store called Sparkles.”) The teens, when feeling frisky and up to no good, break into the library and, gulp, read. It’s so small that teenagers literally have nothing else to do but read? THAT is how small, out of the way, and retiring this little town is. Even the show synopsis calls it a “sleepy coastal town.”

So back to the scene. The new daughter-in-law asks about the dancers attending the mom-in-law’s ballet class. The teenage girls all had a story, and of one, the mom-in-law said,

“Her dad’s gay. Oh, he thinks it’s a big secret but we all know. Thing is, if he would just come out of the closet he would smile once in a while. And plus, there are a lot of very nice, single gay men in town.”

A town so small has “a lot” of gay men? The perception the homosexual lobby would have us believe, and uses family entertainment to do it, is that literally just about everyone is gay. Bombard a population with that message for thirty years and you get a new generation coming up who thinks everyone is gay. And if there are so many gays, then it must be normal. That is the strategy. Normalization through numbers.

Of course I’m not blaming the entire skewed perception on one television show, but it is representative of the insidious but casual nature that scripted tv and movies: that every closet has a gay person lurking inside it, summoning up the courage to leap “out.” We have been saturated with casual one-off lines like the one in Bunheads casually declaring that there are “a lot” even in this small town. ‘We don’t have a theater but we’ve got our gays!’

You can see the success the homosexual lobby has had in altering the perception of a nation of over 300 million souls. The homosexual lifestyle is an aberration. Some succumb and choose it. Make no mistake, though, it is a choice, not an identity. I understand the fight that homosexual people have in resisting that aberrant behavior. All people attempt to resist sin in some form or fashion. I understand also that some sins are more besetting than others. God will still judge them.

BUT, God in His loving kindness, accepts the repentance of one who seeks to shed that lifestyle and turn to Him. His mercy is greater than any sin, and He listens to prayers beseeching deliverance. Here is a moving three minute clip from a testimony John MacArthur shared of a homosexual’s repentance. (The clip says 7 minutes but the audio goes out after three minutes.) It is quite moving:

If you are involved in a homosexual lifestyle, or any lifestyle that is unacceptable to God, please repent. Ask Him to forgive your sins, and make Him Lord. His wisdom is so vast that he will lead you into a life that is purer and more peaceful than you can ever imagine.