Previous essays in the series:

A Day in the Life of a: Scribe

A Day in the Life of a: Shepherd

A Day in the Life of: A Tanner

A Day in the Life of a: Seller of Purple

A Day in the Life of: Introduction

We’ve looked at the sellers of purple. Lydia was one. The manufacturing process of purple dye was lengthy and expensive, making purple dye a luxury only a few could afford. However, everyone needed pots. Rich or poor, woman or man, mansion or hut, every person in the ancient biblical world needed ceramics. Therefore, pottery was ancient Palestine’s biggest industry.

POTTERY The production of pottery was one of man’s great innovations in the later stages of the prehistoric period (Prehistory), and one of the most important landmarks in the long process of transition from the nomadic life of hunters and food-gatherers towards a settled existence. Pottery is made of clay, a type of soil almost universally available, which with the addition of water acquires plasticity, enabling the potter to shape it as required. Once fired, the shape given to it is retained.
Source: Negev, A. (1990). In The Archaeological encyclopedia of the Holy Land (3rd ed.). New York: Prentice Hall Press.

I am fascinated with marine archeology. I remember as a kid watching documentaries about finding and old ship. The excavators always got excited when they found an amphora. Amphorae were ancient Roman or Greek cargo pots that goods were shipped in. They could date the wreck by the design of the amphora. Every single ship carrying anything had ceramics on board as the cargo containers.

Amphorae are of great use to maritime archaeologists, as they often indicate the age of a shipwreck and the geographic origin of the cargo. They are occasionally so well preserved that the original content is still present, providing information on foodstuffs and mercantile systems. (Wikipedia)

Ceramics for common uses such as shipping containers (amphorae) and water, wine and oil jugs were so ubiquitous that-

Amphorae were too cheap and plentiful to return to their origin-point and so, when empty, they were broken up at their destination. At a breakage site in Rome, Testaccio, close to the Tiber, the fragments, later wetted with Calcium hydroxide (Calce viva), remained to create a hill now named Monte Testaccio, 148 ft high. (Wikipedia)

You can picture Job sitting near the pot sherd pile scraping his boils. When Paul was on the ship that was in the terrible storm (Jonah too) the men who threw the cargo overboard were most likely throwing over pots like these. 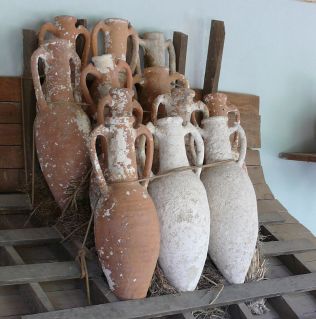 Amphorae stacking. Suggestion on how amphorae may have been stacked on a galley. (Bodrum Castle (Turkey). A Galley (from Greek γαλέα – galea) is an ancient ship which is entirely propelled by human oarsmen. Source Wikimedia

The art of pottery is one of the most common and most ancient of all manufactures. It is abundantly evident, both that the Hebrews used earthenware vessels in the wilderness and that the potter’s trade was afterward carried on in Palestine. They had themselves been concerned in the potter’s trade in Egypt, (Psalms 81:6) and the wall-paintings minutely illustrate the Egyptian process. The clay, when dug, was trodden by men’s feet so as to form a paste, (Isaiah 41:25) Wisd. 15:7; then placed by the potter on the wheel beside which he sat, and shaped by him with his hands. How early the wheel came into use in Palestine is not known, but it seems likely that it was adopted from Egypt. (Isaiah 45:9; Jeremiah 15:3) The vessel was then smoothed and coated with a glaze, and finally burnt in a furnace. There was at Jerusalem a royal establishment of potters, (1 Chronicles 4:23) from whose employment, and from the fragments cast away in the process, the Potter’s Field perhaps received its name. (Isaiah 30:11)

Pitchers, water jugs, cups. Perfume jars, juglets, cruets. Wine and oil storage up to 25 quarts. Wide mouth jars stored grain. Sadly, household gods was a thriving pottery industry. Remember Rebekah in Genesis 31, she stole the household gods. These were called teraphim, and they probably looked something like this:

Pottery objects were made for children, too. War horses for boys and and small cooking pots for girls have been found, as well as rattles and baby feeding bottles for infants. Oil lamps for household illumination were made of pottery. Even broken pottery had uses. Larger sherds would be used as scoops and dippers. Others, to carry coals from one fire to another.

Pottery represented one of the major manufacturing industries of the ancient world, and the Israelite potters were what we called  “up and coming businessmen.” With the potter’s wheel, they had assembly line methods of manufacture with different men performing different parts of the process. They knew the temperatures various clays with their various impurities would fire at. They had standard sizes which ran in staggered sizes. Pride of manufacture is indicated by potter’s marks.

Pottery industry was organized by families and guilds (1 Chronicles 4:23).The most difficult part for the apprentice was mastering the firing of the kiln and this was probably passed from father to son. Greeks used to pray to the gods before firing the kiln and the medieval potters offered prayers first.

The life of a potter was good, because what he produced is always in demand. His wares were not for the luxe crowd as was the purple seller’s, even the poorest of the poor could afford a thrown small water jug. It cost a penny. It was a physical job (see jpg) but not as physical as a dyer or a tanner, nor as dangerous as a shepherd. The local potter was a middle to upper class businessman.

Clay was plentiful in Palestine, the potter never had far to go for gathering raw materials. He couldn’t perform his craft just anywhere, though. His shop was likely at the edge of town so that the smoke from the kilns would not offend residents. It was a safety feature also, as it prevented fires in the crowded town.

This is what the LORD says: “Go, buy a clay jar from a potter. Take some of the elders of the people and leaders of the priests, and go out to the valley of Ben-hinnom near the entrance of the Potsherd Gate.” (Jeremiah 19:1-2).

Note the verse in Jeremiah 18:2 where God said for Jeremiah to “go down” to the potter’s house, no other direction was necessary. Pottery was a necessity and everyone would know where the potter’s house was. There would be at least one in every village.

The Psalms have a series of songs called Song of Ascents, this was to be sung on the way up. So when God said for Jeremiah to go down to the Potter’s House, it was likely that the potter was situated outside the city at the bottom of the mount. The raw materials were there, anyway.

The specific area where potters were is noted in Jeremiah 19:1-2,

Ben-hinnom later was transliterated to Gehenna, the waste dump with fires that Jesus likened to the fires of hell. One can imagine this quarter of the city and environs, with kiln fires constantly blowing smoke over the valley, piles of raw material clay, clay covered potters at work, waste mountains like the one mentioned above in Italy that was 148 feet high. source Biblical Archeology

In one of the Bible’s most beautiful metaphors, God likened Himself to a Potter and His creations as clay. His work is completely sovereign.

5 Then the word of the Lord came to me: 6 “O house of Israel, can I not do with you as this potter has done? declares the Lord. Behold, like the clay in the potter’s hand, so are you in my hand, O house of Israel.

There is a traditional saying about the roots of the word sincere. Not all potters were honest, as happens in every trade, there were a few bad apples floating around.

On the other hand, it also could have as its root two words in the Greek, one word meaning sun, the other meaning to judge, so that it literally in its root meaning has the idea of testing something by sunlight – testing something by sunlight.  That, by the way, we don’t know for sure if that’s the root of eilikrins, which is the Greek term, but it is the root of sincere, which is a Latin derivative.

The Latin word is sin cerae, and it literally means “without wax.” Now, let me explain what that means. A potter who was making a jar, or a bowl, or a plate, or a dish of some kind, would turn it on his wheel; and then when it was completed, he would take it and fire it, bake it, as you know.  Frequently, because of some impurity in the clay, or some error in judgment in terms of the temperature, or whatever, it would come up with a crack. A cracked jar, or pot, or bowl, or dish, would be useless.

But because of the money invested in it, the unscrupulous potters would try to cover up the crack, and they would take a hard wax, and they would fill the crack with wax. And then they would cover it over with whatever they were using to coat or to paint the pot or the bowl. And so when any wise person went into the marketplace to buy a piece of pottery, they would typically hold the pottery up to the sunlight and rotate it to see if it was without wax, because the sunlight could shine through the crack and reveal the wax – which, of course, the first time anything heated was put in it, would melt, and it would be discovered as useless.

A life, then, needs to be held up to the sunlight to determine whether it’s got any flaws that are being falsely covered over by the wax of hypocrisy. That’s the idea. That may well be the root of the word “sincere.” That certainly is behind the Latin concept, sine cera, which means without wax.

I ‘sincerely’ hope you’ve enjoyed this peek at the potter. There is actually much more to be enjoyed about the long history of pottery, which began in or near Egypt perhaps as early as 5000 BC. There are different ages of the evolution of pottery, Palestinian trends in pottery, the painting and decoration of ceramics. A potter was a skilled artisan, busy from dawn to nightfall, creating useful and decorative items for the many people and tribes in his area. He was one of many workers depicted  in our Bible, such as the Seller of Purple, Tanner, and Shepherd.

If you have a suggestion for ‘a day in the life of’, please let me know in the comments!

One thought on “A Day in the Life of A: Potter”