I don’t know about you, but I love music. Since I converted my tastes run to to Christian music, my favorite is Southern Gospel quartets and hillbilly bluegrass. I enjoy classical, too. If I listen to secular music my tastes run to ’70s artists like Paul Simon and other soft rock. GotQuestions gives some Christian principles on whether or not to listen to secular music.

My mother loved classical music and would put that on first thing while she was making her coffee, and have it on all day I grew up on Beethoven and Mozart, and I’m glad, because I like classical music now too.

I remember when I was younger, when I’d hear my favorite song on the car radio, I’d crank it all the way up and sing along. At home, when I was cleaning I’d put in my CD and do the same, turn up the volume and put some dance moves while vacuuming the rug. A broom makes a good microphone.

A lot having to do with music has changed in my lifetime. I grew up on 45 records. These were vinyl records that played a 3-minute single. Then you’d turn it over and hear the B side, or less popular song. Or put on another 45. Of course, longer playing records were available too. These were called LPs.

In between these technological marvels, we had cassette tapes, 8-tracks, and when Compact Discs came along (CDs) even the Walkman portable CD player. Those were garish and I never liked them. When you clipped it to your pocket and walked it jogged the CD track and made it stutter. They were heavy too. And I didn’t like the wires that came from the ears to the player, they always got in the way. CDs didn’t last too long, streaming music came into the culture in the 1980s and that was a terrific technological advance No more hovering by the radio with your finger on the cassette ‘record’ button so you could make a mix tape of your favorite songs! But it was a fun way to spend the afternoon with a friend, pre-internet. That’s what we did, especially if it was raining out on a Saturday.

I remember in my bedroom I had a corkboard. Pinned to it were quotes from songs I liked. I had the Beatles on there, and one from Jimmy Buffett. “If we couldn’t laugh we’d all go insane.” I must have put them up before I was 8 because that was in the upstairs bedroom of a Cape Cod home we lived in, and we moved after that.

Christian music has doctrine, and when you sing the lyrics you’re singing truth. Or should be. A lot of music today has watered-down truth, so be careful. Anyway, here are some thoughts about music for Christians:

The Getty’s have listed their favorite hymns and put them together in track list so you can listen to them on the various streaming media. Here it is, the Sovereign Grace Music Collection

The Sacred Mundane have produced one single so far but they are working on more, with recently upgraded equipment. I happen to know this because they are our very own music leaders in our church! Ian and Erin Webster. The Sacred Mundane, This is My Father’s World. They have beautiful voices.

I like music from other cultures and in other languages. Just prior to my conversion, I listened a lot to Prabhu Nam Kaur and Snatam Kaur from their CD Mother’s Blessing. Snatam is a wildly famous singer of Sikh hymns and collaborates with her mother at times, as she did on this CD. It’s beautiful music and soothing. However once I was converted I translated the lyrics and they, of course, being Sikh, were praises to gurus and other gods. The music was beautiful but I could not consume a beautiful apple with poison inside, so I threw the CD out.

After this I looked, and behold, a great multitude that no one could number, from every nation, from all tribes and peoples and languages, standing before the throne and before the Lamb, clothed in white robes, with palm branches in their hands, and crying out with a loud voice, “Salvation belongs to our God who sits on the throne, and to the Lamb!” (Revelation 7:8-9).

When we gather in heaven to sing praises to our Lord, will we sing with one language as some interpret Zephaniah 3:9 (a reversal of the curse of different languages in Genesis 11:9), or will we sing in our own language but be understood universally? I don’t know, but we will sing.

There is a new song in heaven sung by the elders and the creatures, (Revelation 5:9) and by the 144,000 as shown in Revelation 14:3, and in 15:3 by the Tribulation martyrs. We will worship God with pure motivations and no sin. Worship today on earth means praises and songs, so it stands to reason that our songs will continue there but be sung purely and perfectly! 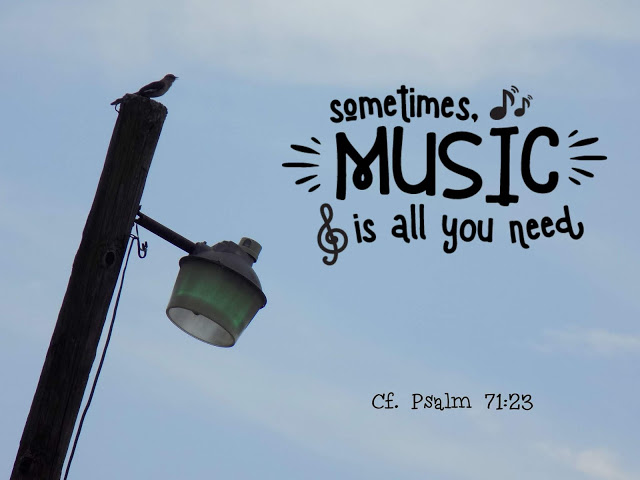