In 2005, Beth Moore was interviewed by Today’s Christian Woman magazine. They asked Moore: 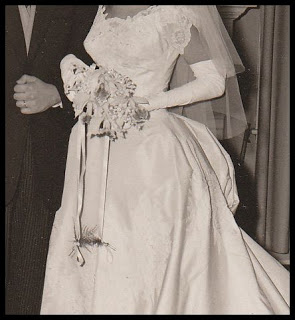 Q. What led you to Jesus?

My Sunday-school teacher would hold up pictures of Jesus, and he looked so nice. I needed a hero, and Jesus seemed like one. I’d lie on the grass, stare up at the sky, and wonder what Jesus was like. Even as a child, I fell in love with him. After my freshman year in college, I was a camp counselor for sixth-grade girls. Early one morning, as the girls were sleeping, I sensed God’s presence enfold me. There were no audible words, no bright lights. But suddenly I knew, without a doubt, my future was entirely his. You are now mine, he told me. (source)

If that sounds familiar, it’s because it is very much like many other false teachers’ conversion stories.

It’s a testimony devoid of essential Gospel elements such as sin or repentance, but rife with romantic eroticism. Sarah Young describes her experience this way:

Suddenly I felt as if a warm mist enveloped me. I became aware of a lovely Presence, and my involuntary response was to whisper, ‘Sweet Jesus.’ This utterance was totally uncharacteristic of me, and I was shocked to hear myself speaking so tenderly to Jesus. As I pondered this brief communication, I realized it was the response of a converted heart; at that moment I knew I belonged to Him. (source)

The Bible speaks of the church as the Bride of Christ but does not describe the universal call of the gospel in sensual terms of a lover pursuing His love interest (who may have no interest in return). God is commanding sinners to repent. The gospel calls for repentance and faith, not romantic feelings looking for satisfaction. Voskamp’s romanticism is enhanced by her skill at describing things in a most sensual manner. The sensual terminology is designed to create a mood, a feeling, a sense of romantic mystery that longs for discovery and fulfillment. Those like me who relish clear description of theological concepts meant to be understood and discerned, will be horribly frustrated by the book. Her book is not meant to be a theological text filled with ideas to be judged true or false, but is instead a literary piece filled with feelings to be relished.

Conversion and life in Christ is not the fulfillment from a young girl’s romantic heart, yearning for a boyfriend. It’s the majestic gift of grace from a powerful but merciful God who draws people to Himself and forgives of sin, making them a new creation. Moore’s yearning for a heroic boyfriend is not the same as Godly reconciliation and peace from the spiritual battle in which all are engaged. Sadly, Moore has built a career on the false premise, and many millions have followed her down that path.

Such romanticism is not new nor did it originate with Protestants. Some Catholic mystics were adept at seeking and enjoying such unions. These women were popular in the Middle Ages. Here is an explanation of this kind of conversion story related to a famous Catholic mystic, Teresa of Avila:

The symbolism of bridal mysticism is found already in early gnostic forms of Christianity, where the central sacrament is called the Bridal Chamber. There the feminine soul of the gnostic unites with the masculine spirit and is in this way spiritualized, that is, liberated from the limitations of mundane existence.

In a more restricted sense, the term mystical marriage is employed by St. Teresa and St. John of the Cross to designate that mystical union with God which is the most exalted condition attainable by the soul in this life. … This state consists of three elements:
1. The first is an almost continual sense of the presence of God, even in the midst of external occupations.
2. The second element is a transformation of the higher faculties in respect to their mode of operation: hence the name “transforming union”;
3. The third element consists in an habitual vision of the Blessed Trinity or of some Divine attribute.

You notice in the writings of these women, especially Voskamp and Young, they mention “Presence”. That’s mystical bridal union state #1.  For example, Voskamp wrote,

The practice of giving thanks . . . eucharisteo . . . this is the way we practice the presence of God, stay present to His presence, and it is always a practice of the eyes.

This notion of continual presence and feeling it tangibly comes from a book written by Brother Lawrence, called Practicing the Presence, who was, you guessed it, a 17th century Catholic mystic.

These “mysti-chicks” such as Voskamp, Moore, Kim Walker Smith and Young, also mention that they have experienced bridal mysticism’s heightened senses and a clarity of thought, and third, they say they continually hear God or see angels or have habitual visions. Just as the Catholic encyclopedia says occurs in their descriptions of what they claim is the state of bridal mysticism.

Compare those flimsy, feelings & emotion saturated female ecstasy conversion stories with a real conversion story. This one is drenched in the scriptures.

Beth Moore’s conversion answer to the Christian reporter was terribly sad in its absence of anything remotely Gospel. A mysti-chick seeking a handsome hero to enfold her and keep her forever is a conversion story more attuned to bridal mysticism than the gritty realty of a repentant sinner saved by grace through faith.

And that’s bridal mysticism. As for the second part of my original question, why is it so prevalent? It is because apostasy is always present. As long as Christianity exists in this age, there will be those who claim to possess a transformed heart but do not possess one.

Now the Spirit expressly says that in later times some will depart from the faith by devoting themselves to deceitful spirits and teachings of demons, (1 Timothy 4:1)

Some of these people making the claim will be teachers, pastors, leaders. If you believe that false converts should be easy to spot, you’re wrong. Judas lived intimately with the disciples and Jesus for three and a half years and none of the disciples even suggested Judas as the false one when Jesus said there is one among them. Philip baptized Simon the Sorcerer, who later was cursed because he thought he could obtain the Spirit by money. Demas walked with Paul, the greatest evangelist on earth, but he showed his true colors when he left Paul because he loved the world more.

If the Disciples, Philip, and Paul could not initially spot a false convert under their nose, neither can we. However, false converts always do or say something eventually to reveal who they really are.

So, mysti-chicks did not originate with post-modern Christianity, nor did they originate in the Middle Ages’ Catholic bridal mysticism. They’ve been around as long as metaphorical Jezebel, whom Jesus threatened to strike dead. (Revelation 2:20-23). Be wary of teachers who have a conversion story absent of the necessary elements, who have added elements, or who have relied on some sort of temporal experience as the basis for their conversion. They must have a clear view of who Jesus is, (Savior) and who they are, (sinner) from the start. Not a mature perspective, because converts are babes in Christ, but a correct one. A house built on sand will not last.

For the ladies who wonder if it is OK to read or study under these false female teachers’ earlier works, ‘when they still seemed solid,’ just remember their conversion was based on sand. They were never solid.

2 thoughts on “What is ‘Bridal Mysticism’? And why is it so prevalent?”

Yesterday I introduced the series and explained why I believe it's important to examine things like God's judgments. Mainly because these are in God's word, so doing so is profitable, but also because we learn more fully about God when we look at ALL His attributes. Tune in to see what #1 of the "Four Sore Judgments" are. God's Four Sore Judgments: Introduction This episode is also available as a blog post: https://the-end-time.org/2022/01/22/gods-four-sore-judgments-1-sword/

From Twitter @TheRhetorRick
Dinner was: Petite canned tomatoes and spinach atop a chicken breast, crock pot potato.
Lunch was: Crispy air fried tofu with dipping sauce, marinated cold green beans with peanuts.
I got up at 5:30 and spent some time in the Bible. Pandora was playing softly with instrumental hymns. There's not another sound in the building except the birds singing at dawn. What a sweet, sweet time of communion with God. I truly love Saturday mornings.
Praying for Believers