Yah, here’s some personal stuff, which you know I hate to talk about. Someone had asked me in a comment if I have a testimony on the blog. I don’t, so here it is. Jesus is great.

As an 18 year old, I’d decided I wanted a traditional life. It felt right and good to pursue that. I’d grown up in a time which normalized everything that was contrary to God: open marriage, adultery, feminism, gender roles were reversed, experimentation was encouraged, drugs & alcohol were everywhere, etc. It was the 60s. None of that seemed right or good to me. I decided I wanted a marriage, home, and a career as a teacher. I wanted a solid, grounded, traditional life.

When I went to college I found the man. We hooked up when I was a freshman, and moved in together by sophomore year. We married when we graduated. We saved for a house, those were the days when you saved up, and put 20% down on a home. It was new, and we saved up for the furniture, and by then I’d gotten a teaching job. My husband was an engineer. Normal!

By the time I was age 26 he had found another woman, had an affair, and left. I was against the divorce. He left anyway. What happened to the traditional life I’d worked for? I did everything right, but it hadn’t worked out. I was perplexed. Where had it all gone wrong?

I was left with a mortgage to pay on a beginning teacher’s salary. Hard. I got a second job working 4 nights a week at the local movie theater, and still not making it, I got a third, weekend job at a local bookstore. It was still obvious to me that it was better to go through life two by two, a married man and woman, but no man was on the horizon. Alone, I had to deal with the chimney sweep who wouldn’t leave the house when he’d finished cleaning the woodstove, the tax preparer making crude and inappropriate comments as he looked over my W2s, the car salesman who said we had to finalize the car deal at the local bar, the rapist stalker I worked with the police to catch… It is clear that it was much better for a woman be married to and under the protection of the husband, emotionally, financially, and safety-wise. This is a philosophy many women today reject.

By the time I was 29 I was wrung out, tired, and frustrated with life. I pondered the following questions constantly:

–Is this all there is to life? It seemed that life was so short compared to whatever else was out there. What was it all for? To work 50 years, retire and die? It seemed all pointless. Humans had obviously not evolved but there had to be another purpose to man, since biological human complexity far outweighed the vaporousness of what seemed like a relatively short life.

This was the 80s and consumerism was at its height. I had a house, a new car, a 27 inch tv, a VCR (expensive item in those days) yet none of the ‘stuff’ fulfilled me either. I had friends and literary and cultural pursuits and dinner parties and jaunts to the beach but those didn’t satisfy for very long either. I was totally confused as to what life was about. I knew deep in my heart, though, that something else was out there. I kept looking.

That was the Ecclesiastes portion of my life.

By the time I was 29 I’d had it with traditional living. It was not cutting it for me. Maybe the 60s were right, a NON-traditional life was the way to go, except that people picked the wrong experiences to have and I’d pick better ones. I decided to dump my life and find a new one. My version of a non-traditional life was to not work a 9-5 job but instead to travel. I joined an Earthwatch Archaeological expedition and went to Italy for a month, the first two weeks traveling by myself and the second two in Tuscany digging up a castle.

At this exact time my friends set me up with a date with a man. We went out a few times but didn’t really connect, until he asked the $64,000 question. “If money was no object and you could live any way you wanted to, what would you do?” I answered right away that I’d get on a boat and sail to Bora Bora. He dropped his slice of pizza and said that he was in the middle of buying a yacht and he planned to sail to The Bahamas. We discussed our philosophies of non-traditional living, and by the time I came back from my August in Italy, he’d bought the boat and we went sailing away by October.

And so began the Romans 1 portion of my life- God revealed in creation.

We sailed about 11,000 nautical miles, we delivered a 22 foot motor boat from Naples Fl to RI adding another 1100 miles under our keel, we went across country in the VW van, we went in an ice breaker ship in Labrador, we drove around Ecuador, train traveled around Europe a bunch of times etc. I was still looking for that ever elusive something, and indeed my heart connected with God by seeing His creation, but not Jesus and my sin.

It was not until the third portion of salvation road that got me over the salvation threshold, something from the book of Mark (a story for another day).

Sailing was interesting. I saw the entire US coastline at a 3mph rate. We docked in every port. We passed every type of marine conveyance from kayak to aircraft carrier. We learned about canals and locks. The Dismal Swamp, Intracoastal Waterway, barges, fishermen, Chesapeake watermen, bridge tenders, smugglers. In the photo below, we had decided to make an overnight passage sailing from Charleston SC to St Augustine FL. The photo was snapped by my husband at about 6AM, it was sunrise and I’d had the dogwatch- 4-6 am. It’s the coldest, darkest part of the night and you are never so happy as when you see that sunrise. Everyone hates the dogwatch. I’m dressed in three sweatshirts and two pairs of sweatpants, and gripping a cup of hot, black coffee my husband had just passed me as it it was a life preserver!

Ocean sailing at night is disorienting. You look and look for the Lighthouse and when you see that light you sigh with a deep relief because now you know where you are and where you are going.

In the ocean, there are things to hit. Buoys. Whales. Even containers. When a container ship is in a storm, some of the containers fall off the deck, did you know? They float just a few feet below the surface for a few hours or so on their way to the bottom. If you’re sailing at night, there’s no way you’d see it in the dark. During the day you might notice a strange wave pattern- if you happen to be looking that way. Sometimes you read in the paper that a container washed up, once a container full of Nikes spilled out onto a WA beach. This is a snippet of a news article from 1999 Nat Geo:

Anyway, until the container is either picked up or washes ashore or sinks completely, it presents a hazard to mariners. Sometimes you hit one and you sink. Or you could hit a whale. Steve Callahan’s story was made famous in the 80s with the publication of his book, Adrift: 76 Days Lost At Sea. He “hit an unknown object” and his badly damaged boat sank, he later said he thought it was a whale. He made a sextant with three pencils and an elastic he had in his pocket and navigated himself in the lifeboat that way. Cool.

Coastal overnight sailing is more hazardous than mid-ocean overnight sailing. Objects in the mid-ocean are there but the chances of hitting them are reduced dramatically. Sailing at night along the coast means you have to be ever vigilant that the wind doesn’t push you toward shore- and hidden reefs- or that the current doesn’t push you, or that you don’t hit other boats out there fishing or smuggling (illegal fishermen and smugglers don’t use running lights). The biblical metaphor here is that in coastal sailing you have to constantly check course. Even being a half a degree off for any length of time could wash you up on the rocks pronto. That’s why I don’t give an inch on doctrine. None of the Apostles did, warning us severely.

Below is a photo of our vessel. A Tayana 37, Taiwanese made 37′ boat with wooden mast, wooden bowsprit, full keel, faux-lapstrake, beamy, lots of beautiful teak, and 24,000 pounds of solid, if not immediately responsive, live-aboard sailing yacht. I used to joke that we had to make a reservation to get her to come about. She was a good boat. 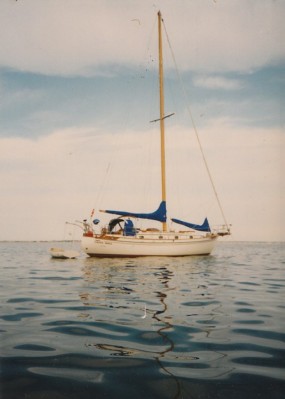 Anyway, she was my home for two years, along with my husband and the myriad of motley non-traditionalist fellow sailors out there who became friends. We were all looking for that certain something. I know I found it and it turns out that I didn’t even have to sail 11,000 miles to find it. Or maybe I did.

When Jesus talks of Him being the Lighthouse, I can relate. When Paul says do not make a shipwreck of your faith, I can understand. When Hebrews writer says do not drift away, I get it. When Jude warns of hidden reefs and wild waves of the sea swept along by winds, I know what he means.

Shakespeare was right, “There are more things in heaven and earth, Horatio, Than are dreamt of in your philosophy.” (Hamlet) I knew it, I just knew it.

“For the invisible things of him, that is, his eternal power and Godhead, are seen by the creation of the world, being considered in his works, to the intent that they should be without excuse” (Romans 1:20)

The LORD made a wondrous world, set me adrift in it, watched me from the beginning, gradually shortened the leash, and in His timing, brought me to His bosom. I traded the leash of sin for the chains of glorious servitude to my master. More to the metaphor, my anchor holds, He is Jesus, and the chain will never break. As beautiful as this world is, I know that the next one will defy comprehension and exceed in beauty anything we can conceive. “No man has seen…” I think we will all be there soon.