There is a Facebook meme going around attached to this photo: 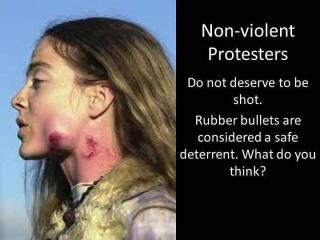 Whenever anything  is promoted that is this inflammatory, so obviously designed both in picture and in word to generate a gut reaction instead of an intellectual response, I go on alert. Because it was associated with Occupy Wall Street, I was downright suspicious.

The meme-promoters likely hope to generate a response along the lines of, “Of course non-violent protesters don’t deserve to be shot! Those bastards! Look what they did!” Well, before jumping into the fray, I needed context.

My initial response is that though this one may seem like a no-brainer to answer ‘yes’, there really are two sides to the story. Many OWS protesters are “violent” in other ways, such as illegally occupying private property, violating zoning rules, illegally using generators, failing to follow proper food handling procedures (putting eaters at risk), consuming or selling illegal drugs, destroying private property, etc. The list is long. I would need to know what this woman was actually doing before I determined whether she “deserved” to be hit with a rubber bullet…

And that is the other thing to note: the word “deserved” implies an emotional judgment is necessary on behalf of the viewer, but of course not on behalf of the law enforcement officer who made the call to fire the bullet.

Within 5 minutes I found that the photo, though titled ‘occupy.jpg’ has nothing to do with the Occupy Wall Street Protests. It was from an event that occurred in 2003: Police Attack California Anti-War Protesters
It is an AP article and here is the original caption of the billet ridden woman:
“A protester, who refused to give her name, bears the wounds after she says was hit by Oakland police weapon during a anti-war protest in Oakland, Calif., Monday, April 7, 2003 outside the port area. (AP Photo/Paul Sakuma)”

The sympathy the meme-promoters hope to garner is an imagined scenario of the hapless and innocent protester writing on the ground and screaming in righteous wrath from her injuries. But she looked pretty conscious, sentient, and ambulatory here: 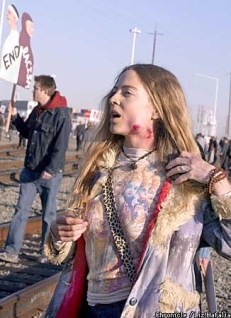 As far as what people “deserve”, no, innocent protesters abiding by the law do not deserve to have excessive force leveled against them. The right of free speech in this country is still a value I hold dear. But by law-abiding people who are not engaged in violence themselves. This article from the 2003 incident describes law-breakers turning violent:

“More than 500 protesters gathered around 6 a.m. at the entrances to APL and Stevedoring Services of America (SSA), two shipping corporations that have military-related U.S. government contracts. Protesters said APL, an Oakland-based company, ships military cargo to Iraq. Seattle-based SSA won a $4.8 million contract last month to handle the aid cargo arriving at the Umm Qasr seaport in Iraq. … Monday’s demonstration was the culmination of four days of anti-war action held around the nation and came on the heels of Saturday’s rally and march in Berkeley and Oakland, during which 9,000 people protested without conflict with police.”

“Danielle Ashford, spokeswoman for the Oakland Police Department, said police officers on Monday opened fire on protesters after warning them to disperse. She said most protesters heeded the command; those who did not, however, were fired on with what she called “less lethal weapons,” including wooden “bullets,” bags filled with small metal balls, and sting balls, which disperse rubber bullets and a minuscule amount of tear gas. Ashford said police force was necessary because protesters refused to disperse and were throwing rocks, metal bolts and small pieces of wood at officers. She added that many protesters climbed on trucks attempting to enter the port gate. “There is a difference between a peaceful protest on Saturday and this one,” she said. “This was a direct action to deliberately shut down the port.”

One commenter on a gun forum said,
“The instant a “demonstration” becomes a “riot”, however (or the instant a single rock/bottle/whatever gets thrown), it’s on like donkeykong and if you’re caught in the middle it just plain sucks to be you (and it’s your own damned fault).”

People, watch out for emotional manipulation, partial, or even false information from the Occupy movement folks. The above is a classic example of propaganda. “Propaganda is a form of communication that is aimed at influencing the attitude of a community toward some cause or position so as to benefit oneself or one’s group. As opposed to impartially providing information, propaganda, in its most basic sense, presents information primarily to influence an audience. Propaganda is often biased, with facts selectively presented (thus possibly lying by omission) to encourage a particular synthesis, or uses loaded messages to produce an emotional rather than rational response to the information presented.”

The “did she deserve to be shot” poster is pure propaganda and that poster exactly fits the definition.

Public opinion is divided on the Occupy Wall Street movement. Many people understand and sympathize that the bankers should not have been bailed out, and the middle class got left behind. But equally, many do not like their illegal activities and believe that protests need to be lawful.

And before you jump in to discussions on social media on this issue, please do a few minutes of research to determine if you are being fed the whole truth. Social media is a great boon to society and is a valuable mechanism of free speech. But it just as easily can be falsified and manipulative. Don’t YOU be manipulated.
Tweethttp://platform.twitter.com/widgets.jshttp://www.facebook.com/widgets/like.php?href=http://the-end-time.blogspot.com/2011/10/non-violent-protesters-do-not-deserve.html