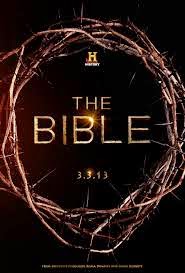 Two years ago I wrote “Why I am Not Watching History Channel’s ‘The Bible‘. That was the hugely popular, smash-hit television series produced by Roma Downey and husband Mark Burnett broadcast on The History Channel, purporting to show major biblical events from Noah to the Crucifixion of Jesus. In ten hours.

The series writers “took many artistic liberties to compress the story lines while hoping to remain true to the story. A public relations manager for the project described the liberties to me as “extra-biblical but not contra-biblical,” CNN Blogs reported.

What people fail to understand is extra-biblical IS contra-biblical. Anyway, we don’t need to rehash all of that, except to remark that the duo’s movie theater version of biblical events called “Son of God” was equally atrocious. Now the duo is back with a continuation from 2013’s televised cable series. This time the series will be on regular broadcast TV, on NBC. It will begin on Easter Sunday.

This new series, however, goes for a more gritty and human approach that tries to understand the characters as humans caught up in the politics of the day. Only about half of the material comes from the Bible, with the rest from historians of the period.

“If anyone comes to it expecting to see only the Bible, they will be interested to see that we have created a much larger and historic and political contest to set that story in, … I think what it does it allows you to have a fuller understanding of that story because when you see the oppression of the times that they are living in, when you understand that danger lurks in every alley, and the inhumanity of the times.”

So we have already see the following strikes:

And now this reason:

The series has several strong female roles in it, including Leah, the ambitious wife of High Priest Caiaphas (Richard Coyle), who pushes her husband to amass more power.

Phew. I’m glad that the writers rectified what was obviously a glaring omission in the bible of strong female roles and invented a few so we wouldn’t have to take up our pitchforks or fire off ‘strong’ emails. Dorcas, Lydia, Phoebe, Anna, Mary, Susanna, Mary Magdalene, all the mothers who raised the Apostles, Elizabeth (mother of John the Baptist), Candace, Rhoda…etc were obviously either not women (lol) or not “strong” enough for the writers’ tastes.

The bible of course records the story of Old Testament Leah. Biblegateway synopsizes her story, “The Woman Lacking Loveliness Was Yet Loyal, Scripture References—Genesis 29; 30; 49:31; Ruth 4:11”. Deliberately naming a fictional woman in a New Testament tv show the same as a famous Old Testament saint is duplicitous. I notice that the writers also created a fictional male character and chose to name him Boaz. Doing this sows confusion.

Anyway, the wife of Caiaphas is not named in the bible nor is she even mentioned. The reference is in John 18:13, and only to introduce the fact that Annas and Caiaphas were linked through marriage. That’s it. She as not named nor did she have a role in the New Testament, but she gets screen time, unlike REAL women in the bible, who won’t get screen time. The quote from the article continues,

The role of Mary Magdalene is also central. While she doesn’t quite attain the status of head of the nascent church given her by Dan Brown’s “The Da Vinci Code,” she is clearly one of the key members of the group as it tries to figure what comes next after the crucifixion.

But here is the revealing reason women are given such prominence in the series. It is sickening and is one of the many reasons I won’t watch the show

“Our interpretation is that while many organizations are fronted by men, women were the ones that kept the cogs moving,” said Chipo Chung, the actress that plays Mary

Aha. So while the chosen and called male apostles, prophets, and disciples risked their lives, glorified God, suffered and died grisly deaths, these men were only front men while the women did the real work.

So you see, it only takes a moment to read up on the background to the show, investing a bit of time to see what their agenda is. Their agenda is-

Their intent is obviously to:

So? Do not watch. The bible commands it.

I urge you, brothers and sisters, to watch out for those who cause divisions and put obstacles in your way that are contrary to the teaching you have learned. Keep away from them. (Romans 16:17)

PS: Remember, this is the show that Dr David Jeremiah is promoting and broadcasting on his Turning Point channel. On Easter.

UPDATE. And the agony continues-

Actor Hugh Jackman, who has starred in a plethora of well-known films, including “Les Misérables” and the “X-Men” series, is set to reportedly add yet another major motion picture to his resume: “Apostle Paul.” Hugh Jackman will reportedly play the Apostle Paul. The faith-based project will center on Saul of Tarsus…Following the announcement, Jackman’s own religious views were given some attention. As noted by the Guardian, he told Parade Magazine back in 2009 that he follows the School of Practical Philosophy, a belief system that focuses in on the power of wisdom, though it appears that he has some evangelical Christian roots. His told the outlet at the time that his father took him to see famed evangelist Billy Graham when he was a child. “[My dad] takes his religion very seriously and would prefer I go to church. We’ve had discussions about our separate beliefs,” Jackman said. “I just find the evangelical church too, well, restrictive. But the School of Practical Philosophy is non confrontational.”

Well he’s a perfect person to play the fierce and confrontational Paul.(1 Corinthians 4:21, 2 Corinthians 13:2). Not

David Nilson at The Gospel Coalition put his punctuation on the History Channel’s The Bible series with a concluding essay. Here is how he ended his piece:

“The Bible might not excel as an education tool, at least it isn’t brazenly heretical. For an American cable TV drama, that’s probably the best we can expect.”

There are three thoughts in that sentence that I want to pursue a bit further.

Let’s look at the stance that the tv series does “not excel” as an education tool. The opposite of excel is “bad, failing, imperfect, indistinguished, inferior, poor, second-class, second-rate, unnoteworthy, unworthy”. So if we plug any of the antonyms in his sentence we can say of the series instead ,

Then there is the notion that ‘At least it’s not brazenly heretical.’ CARM defines heresy as “A doctrinal view that deviates from the truth, a false teaching.”

Brazen means bold and without shame. So we can translate his phrase by saying, “At least the false teaching is not too bold.” That’s like saying, ‘at least the manure I’m eating is not too pungent.’ Not too brazen? Like, we can mange living with its discomfort, as opposed to something that would really anger  Jesus?

Too often we forget how devastating false doctrine is. It is an infection that destroys. It is a lion who devours and kills, not a cuddly kitten who accidentally scratches us as it reaches for the yarn.

And the best we can expect? I might agree with that, as long as he understands that none of the front-people involved with developing the series are saved. In that case, we can say with certainty that we never expect the world to present biblical truths with integrity or correctly. I think of James 4:4 here-

“You adulterous people, don’t you know that friendship with the world means enmity against God? Therefore, anyone who chooses to be a friend of the world becomes an enemy of God.”

If he believes the people offering theological oversight such as TD Jakes, Joel Osteen, and Rick Warren and the producers Roma Downey and Mark Burnett are saved, then saying “at least it’s the best we can expect” is a sad indictment on our expectations of the glory and beauty of Jesus. Even in this polluted world, especially because the world is polluted, Jesus shines through His ambassadors, missionaries, witnesses, people. For any Christian who submits to His will and works, we can expect great things, because He is great.

In the same essay, the author states that the production values were great. The movie looked good. And the music was pleasing too! It sounded good.

Words like these help us lower our standards on the height and majesty of Jesus. It sinks us into a pit of slime we eventually become used to. People, don’t become used to it. Satan is the master of incrementally lowering our standards. Just a little bit here and there, flash over substance. I’m reminded of the pivotal scene in the 1987 movie Broadcast News, where Albert Brooks tries to convince Holly Hunter that the important moment in her life had arrived. The moment where we make a choice to accept a little bit of flash to satisfy the flesh, or to sacrifice and stick with substance.

It’s the scene where Brooks, playing Aaron, tells Hunter that the object of her affection (Tom) represents everything that concerns her about the journalism profession’s downward slide. He says, “Tom, while being a very nice guy, is the Devil. He will be attractive. He will be nice and helpful. He will get a job where he influences a great God-fearing nation. He will never do an evil thing. He will never deliberately hurt a living thing. He will just bit by little bit lower our standards where they are important. Just a tiny little bit, coax along, flash over substance.”

Looking good and sounding good are not enough. IS it good? It is only Good if Jesus is in it.

So, did the series “The Bible” meet your expectations? It depends on where your standards are.