Skip to content
To the women who claim to have cuddled with Jesus, heard His whisper, sat on His lap, felt His ‘caress’, had their fondest dreams validated, (and I’m speaking of Beth Moore, Ann Voskamp, Kim Walker Smith, Joanna Gaines, and all the rest), hark to this paraphrase from Revelation 1:12 by John MacArthur,

He [John] turns when he hears this booming voice that sounds like a trumpet, and the voice is speaking, and he turns and sees that this voice belongs to a person in his vision moving among seven golden lampstands. Verse 20 says the seven golden lampstands are symbolic of the seven churches; they’re lights in that sense. And he looks into the middle of the lampstands and must be with some hope for comfort and encouragement, and instead he sees a warrior; he sees a frightening warrior, “one like a son of man – ” a term from Daniel expressing God in form, manifesting blazing glory, who has authority and power and dominion, as it says of the Son of Man in Daniel “ – clothed in a robe reaching to the feed and girded across His chest with a golden sash. His head and His hair were white like white wool, like snow; and His eyes were like a flame of fire. And His feet were like burnished bronze, when it has been made to glow in a furnace, and His voice was like the sound of many waters. In His right hand He held seven stars, and out of His mouth came a sharp two-edged sword; and His face was like the sun shining in its strength.

There is nothing cozy and cuddly about that vision of Christ. In fact, it is so terrifying that in chapter 1, verse 17 says, “When I saw Him, I fell at His feet like a dead man.” It literally, it literally took away his breath.

Ladies, reject the romantic panentheism. Don’t succumb to the idol of emotionalism, as explained here-

Beware of substituting the love of feelings and drama and emotion for the love of God. Some of us come to Him in tears; others in quiet surrender. Some come running, others walk, others are led by another, but the end result is the same. The bottom line is this: God is sovereign, and He will do it His way. It’s not about how we feel—it’s about who He is. more here

See Jesus for who He is: not the hand-wringing needy Jesus who begs for attention from us, but the Warrior in charge of His church, having ‘things against us’ when we do not obey His commands and threatening retribution. (Revelation 2:4, 2:20). 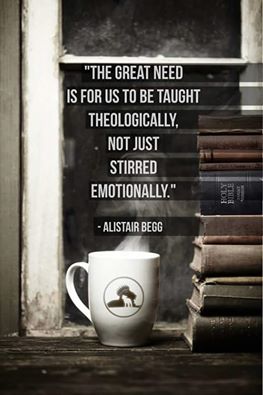 And for a laugh that hurts a little because it’s so true, read this from the Babylon Bee:

RAPID CITY, SD—Sources are reporting that local woman Britney Mollison experienced the presence of her own emotions more powerfully than she has in a long time during a time of worship Wednesday night. According to Mollison’s own testimony, about three-quarters of the way through the set of dramatic songs blasting from the band onstage out to the worshipers, she was finally able to surrender all to her feelings.
“In that moment, when the bridge to ‘Oceans’ reached its crescendo and the keyboardist masterfully applied the wah pedal, my emotions were more real to me than I can remember,” Mollison sobbed to sources. “It was just me and and my personal relationship to the chemicals in my brain responding to stimuli. Nothing else mattered.”

Be theological. It’s the best way to love Jesus, because it is the way He revealed Himself to us.