The Fourth Estate. A phrase coined back in the mid 1700s by British politician Edmund Burke, or by Lord Brougham in 1823, depending on the source. The Three Estates in feudal times were the socio-economic divisions between classes, loosely divided by three Estates of the Clergy (First Estate), Nobility (Second Estate), and Shire Commissioners, knights or burghers (Third Estate).

The press as a Fourth Estate was never considered part of the societal structure but is deliberately outside of them all. This is because the role of the media was to be the watchdog of the other three ‘estates’ when one or more of them went awry, and to give voice to the people. It was supposed to be an advocate for the people, particularly the “voiceless.” END_OF_DOCUMENT_TOKEN_TO_BE_REPLACED

Romanesko has the story:
“Admittedly, I’m biased, as both a Thomas Pynchon idolator and Globe staffer (though I had nothing to do this hed and don’t know who did),” writes Mark Feeney. “But this hed for our two p. 1 stories today on the Russian meteorite has to be one of the year’s best. ‘A screaming comes across the sky’ is great in and of itself, being both accurate and vivid — and as any Pynchon fan can tell you it’s also the first sentence of his masterpiece, ‘Gravity’s Rainbow.’” 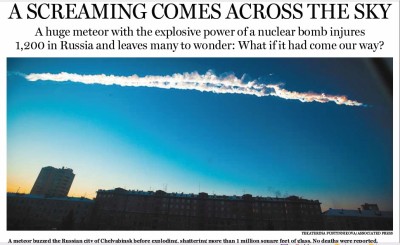 We are still in the section of verses from the Bible depicting the prophecy of Jesus' coming, His arrival, and His early life before ministry. With two more days after today to go, then we shift into looking at Jesus Himself, His earthly ministry, and the different aspects of Himself that He displayed. There are not many verses recounting the childhood and pre-ministry life of Jesus, but there are a few. Here are further resources for you on the topic of Jesus boyhood- What happened during Jesus' childhood? Why doesn't the Bible say much about Jesus childhood? The boyhood of Jesus ~~~~~~~~~~~~~~~~~~~~~~~~~~~~~~~~~~~~~~~~~~~~~~~ Thirty Days of Jesus Series- Introduction/Background Day 1: The Virgin shall conceive Day 2: A shoot from Jesse Day 3: God sent His Son in the fullness of time Day 4:  Marry her, she will bear a Son Day 5: The Babe has arrived! Day 6: The Glory of Jesus Day 7: Magi seek the Child Day 8: The Magi offer gifts & worship This episode is also available as a blog post: https://the-end-time.org/2021/12/05/advent-thirty-days-of-jesus-day-9-the-child-grew-2/