This was the sunset out the front of my door last night. God is incredible as Creator. I wrote about sunsets the other day, here.

We are a visual people now. We enjoy pictures, illustrations, and memes as much, or more, than reading text. So here are some visuals for the folks who are tired of reading and need a mini-break.

If you have no time or are not skilled at making scripture photos, there are Christian Wallpapers Here

This is totally true:

and they said, “Men of Galilee, why do you stand looking into the sky? This Jesus, who has been taken up from you into heaven, will come in the same way as you have watched Him go into heaven.” (Acts 1:11)

If you’re interested in learning about The Ascension, where little has been written exclusively about that momentous event, Derek Thomas has a book all about it! “Taken Up To Heaven: The Ascension of Christ“, available at Reformation Heritage Books,

Below, Elizabeth Prata collage art. I wonder if we understand, truly understand, how ugly sin is and how guilty we are before a holy God

Watercolor by EPrata. One Christmas vacation in FL I bought a pack of index cards and a kids’ dot paint set for my own amusement. I wanted to see how many different designs I could produce with the same materials, just to challenge my creativity.

Now for some real art: Just gaze at the pretty

Humility. Ugh. We could all use more, don’t you think?

I am not God’s masterpiece and I am not enough. I need Christ every day, I’m as helpless as a babe and apart from Him I can do nothing.

I found this cartoon on  twitter, Michael A Nöthem’s stream (@mikandynothem)

Below is created by Eric Novak from Chicago, IL. HT Challies Desktop resources. 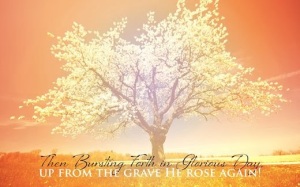 Watercolor by EPrata. One Christmas vacation in FL I bought a pack of index cards and a kids’ dot paint set for my own amusement. I wanted to see how many different designs I could produce with the same materials, just to challenge my creativity.

Now for some real art: Just gaze at the pretty 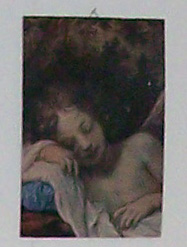 I have a set of Italian paintings and photographs over my couch. I’ve always said to myself that eventually I was going to find out the name of the Renaissance artist who painted the piece from which this detail of the little putto is taken. A putto is a Renaissance figure of a toddler with wings, like a human cherub. I used to know what painting the little angel came from, and I keep thinking Caravaggio or Titian, but I’ve never gotten around to searching for the painter’s name of the piece. Until last night.

I have a wealth of Renaissance books and also art-history books, and access to the internet of course. I spent several hours looking high and low for the painter’s name but came up short. I was getting aggravated but as I searched I got interested in art history again and I kept looking through my books at all the beautiful art. I’ve always been interested in Giotto, the painter from the very late Byzantine-early Renaissance period who represents the bridge between the two styles. Giotto was genius. I stumbled across his Lamentation (Mourning of Christ) and I stopped dead in my tracks, sleeping putto forgotten. I looked, I peered, I studied. And then I cried.

What is it about art that can move us so? Giotto’s use of emotion, placement of figures, tenderness of the scene leaped off the page and into my heart. Giotto was the first to use weight and heft in his clothing, suggesting musculature of the bodies underneath, as opposed to the skinny, stylized figures of the Byzantine era. Mary, holding the head of Christ, is seen using her right knee to prop him up. The emotions on the faces of each of the mourners are each unique but all are real, so real, I mourned along with them. The angels swooping, almost writhing in intense display of grief is also quite moving. One is pulling his hair and another is tearing his clothes. I was dumbfounded that a piece could have such an effect on me, and then I remembered.

I spent a great deal of time in Italy throughout the 1990s. I went over there at least 6 times, and in addition, also spent time in Paris, France, Scotland, and other places around the world. I visited the great art museums such as the Uffizi, Met, Louvre, Edinburgh National Museum, British Museum, etc. I’ve gazed upon painting after painting, walked with the crowds along velvet-cordoned rows on one continent or another. I peered at the Mona Lisa, musing at how small she actually is. I craned my neck up at Michaelangelo’s David, amazed at his evocation of movement in marble. I squinted at pointillists and lounged in front of lazy patchwork sunny scenes of lily pads and canoes in Monet’s world. And, shamefully, I griped at how much of the Renaissance art was religiously focused. Not being saved, and being an enemy of Christ, I understood none of it. I admired the technique, I liked the colors, I could discuss composition. But I could not speak to the content. I glanced, grimaced, and hastened to Botticelli’s Primavera, and Birth of Venus, pagan pieces exalting goddesses. And to my now-grief, I missed  the point of all of it.

How I wish, I wish, I wish (if wishes were horses) I could go back to Florence and review those magnificent pieces through the lens my my born-again eyes!! I mourn the lost time in front of art that speaks to the painter’s fervency, his dedication to the moments of Christ’s life. You see, when you’re saved, you cannot help but speak of Christ. There is much to say! His glory, His love, His mercy, His infinite attributes. The artists who paint the scenes that speak to so much of human history is a glorious way to exalt Him. Bringing to life on canvas what is in the imagination as I read the Word is a wonderful way to impress upon the penitent the timelessness of the scenes.

But in looking at all the art last night, I mourned because of lost time in admiring these masterpieces. Not only lost time in art appreciation, that is just cerebral and emotional. I am mourning the lost time in communing with HIM, in any form. I’m thrilled I am saved, and the adage of “better late than never” applies to me. But He is such a treasure, even one day less of admiring him in painted form, exalting Him in writing, communing with Him in prayer, knowing Him in my heart is such a LOSS. If you are reading this and you are not saved, likely you are thinking that I am silly, nuts, or just ignorant. I used to think those things of saved people too. But knowing Him is an extreme treasure in my life that even one squandered moment I count an immeasurable loss. I pray that the Holy Spirit speaks to you as well and that not another moment goes by before you  capitulate to the Holy Spirit’s drawing you to Him. I’d do anything to go back decades in time just so I could accept Him into my life and know him that much longer. But the glory is, He accepted me, forgave me, so that He and I can spend an eternity together. I’ll be exploring universes, growing in Christlikeness, worshiping Him and serving Him in ways He has not yet revealed.

Thankfully, the story does not end with Giotto’s piece, with a dead Jesus on the ground, being mourned over by followers and family. He is not here, He is risen! He triumphs over death and sin, to rise to heaven, taking His rightful place at the right hand of the Father. Don’t waste another minute, looking at the Story  on canvas but not comprehending. He is waiting for you, and when you ask Him to forgive your sins, He will. And your wasted moments apart from Jesus will fade and your moments ahead with him will stretch into eternity.

[Here is a link to a discussion about the Giotto’s Lamentation painting.]