Excerpts from the information accompanying the new USGS earthquake hazards map, last update 2008. Thank you scientists for your hard work on behalf of the US population. Christians, we know the hazards are increasing and we know why. Be prepared. 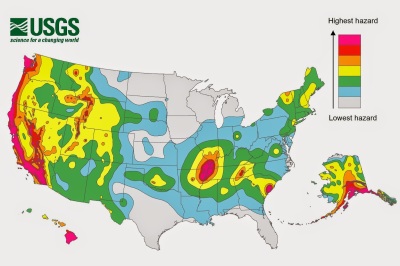 The USGS recently updated their U.S. National Seismic Hazard Maps, which reflect the best and most current understanding of where future earthquakes will occur, how often they will occur, and how hard the ground will likely shake as a result.

The hazard is especially high along the west coast, intermountain west, and in several active regions of the central and eastern U.S., such as near New Madrid, MO, and near Charleston, SC. The 16 states at highest risk are Alaska, Arkansas, California, Hawaii, Idaho, Illinois, Kentucky, Missouri, Montana, Nevada, Oregon, South Carolina, Tennessee, Utah, Washington, and Wyoming. [Since the last map, 2008] Several areas have been identified as being capable of having the potential for larger and more powerful earthquakes than previously thought due to more data and updated earthquake models. The most prominent changes are discussed below.

The eastern U.S. has the potential for larger and more damaging earthquakes than considered in previous maps and assessments. As one example, scientists learned a lot following the magnitude 5.8 earthquake that struck Virginia in 2011. It was among the largest earthquakes to occur along the east coast in the last century, and helped determine that even larger events are possible. Estimates of earthquake hazards near Charleston, SC, have also gone up due to the assessment of earthquakes in the state.

The New Madrid Seismic Zone has been identified to have a larger range of potential earthquake magnitudes and locations than previously identified. This is a result of a range of new research, part of which was recently compiled by the Nuclear Regulatory Commission.

New research on the Cascadia Subduction Zone resulted in increased estimates of earthquake magnitude up to magnitude 9.3.

“If you’ve ever wondered where — and why — earthquakes happen the most, look no further than a new map, which plots more than a century’s worth of nearly every recorded earthquake strong enough to at least rattle the bookshelves. The map shows earthquakes of magnitude 4.0 or greater since 1898; each is marked in a lightning-bug hue that glows brighter with increasing magnitude. The overall effect is both beautiful and arresting, revealing the silhouettes of Earth’s tectonic boundaries in stark, luminous swarms of color. the project offered several surprises. “First, I was surprised by the sheer amount of earthquakes that have been recorded,” Nelson told OurAmazingPlanet. “It’s almost like you could walk from Seattle to Wellington [New Zealand] if these things were floating in the ocean, and I wouldn’t have expected that.” In all, 203,186 earthquakes are marked on the map, which is current through 2003. …   here are undoubtedly many earthquakes missing, given the dramatic change in scope and accuracy of seismological instruments from 1898 to the present day. Nelson said he saw a huge jump in the volume of data from the 1960s forward.” [emphasis mine]

It brings the verse from Isaiah home even more, doesn’t it?

“The earth is utterly broken,the earth is split apart, the earth is violently shaken. The earth staggers like a drunken man;it sways like a hut;its transgression lies heavy upon it,and it falls, and will not rise again.’ (Isaiah 24:19-20)