I’m asked more often lately about what will happen to our pets when we’re raptured. Some ask about the animals we keep, being a farm community. My county abounds with cows, bulls, buffalo, mules, goats, chickens, sheep, pigs and more. I find the question fascinating, and also encouraging. I’m personally invested in the question, too, being an inside cat owner.

The book of Genesis tells us that we are unique in God’s creation, being made in His image and likeness. Also, though we and the animals have the breath of life in us, we were made to have dominion over the animals. Jesus died on the cross for salvation of his people, not animals, who as far as I know do not have a soul, at least, not an eternal soul. It is reasonable to assume that our futures will be different, being of different flesh and having had different roles on earth.

We read in Isaiah 11:6-9 that there will be animals walking the earth during the Millennial Kingdom.

“And the wolf will dwell with the lamb, And the leopard will lie down with the young goat, And the calf and the young lion [a]and the fattened steer will be together; And a little boy will lead them. 7 Also the cow and the bear will graze, Their young will lie down together, And the lion will eat straw like the ox. 8 The nursing child will play by the hole of the cobra, And the weaned child will put his hand on the viper’s den. 9 They will not hurt or destroy in all My holy mountain, For the earth will be full of the knowledge of the Lord As the waters cover the sea.” 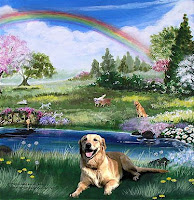 Those verses do not give us any indication one way or another whether any of those animals will be specifically our resurrected pets or whether they will be all newly created animals, or whether they will be animals completely different from any we could conceive of. After all, our normal picture of angels never prepared us for the passages in Ezekiel 10:10-12 with the cherubim of four faces and wheel within wheels. And a word of caution. Remember, a renewed earth is not a new earth.

After the thousand year reign of Christ on earth concludes and He makes a New Heaven and a New Earth (Revelation 21-22, 2 Peter 3:13, Isaiah 66:22) there is no indication that animals will be present with us. But the Bible doesn’t say much of anything about the future eternal state for any of us- humans or angels or animals. So… hard to tell.

I take comfort in the Genesis flood accounts that He took care to provide for animals of the earth. He didn’t make new animals after the flood, and He didn’t give Noah only the animals he would eat and sacrifice, but He provided for all animals. But the truth is, we simply don’t know what happens to animals after the old earth is burned up and the New Earth is created.

We do know for a fact that we will feel all joy in the new heaven, and the former things will not be remembered nor come to mind. (Revelation 7:16-17). I take that to mean that if our pets are not accompanying us in the eternal state, not only the crushing guilt of our sin will no longer be remembered and not only also our lost family members and friends will not come to mind, but also we will not mourn our beloved pets.

The abstract answer to the question as to what happens to our pets indicates that because it is being asked, there is a growing awareness of the real impacts of imminent rapture. (The rapture is an actual biblical doctrine and it has always been imminent (1 Thessalonians 4:13-18, see below for Editor’s Note). Many Christians who ask me this have been Christians for a lifetime, or at least many years. We hear about the rapture and most of us know it as truth and adhere to it as a doctrine, but peeking into the nuts and bolts of the mechanics of it has largely been absent from our thoughts. This is because until now it has not been obvious that we might very well be the generation spoken of that will experience it. Though the rapture has been imminent for thousands of years, the conditions that immediately follow our departure haven’t been.

But those conditions are present now and growing more glaring by the minute. Christians are waking up to the fact that the rapture could indeed occur in our lifetime, or next year, or tomorrow. As we gaze around at our world and see the decline of the church and the war against truth, we start picturing what it will exactly look like- after.

I have an indoor cat. When I’m raptured, whether it occurs when I’m home or at work, it means they will starve. They will be thirsty and alone and lonely and confused. Maybe a tree will fall on the house in one of the terrible storms and disasters prophesied to come upon the earth, and maybe they will be injured or escape into the world, only to be eaten by a larger predator. I don’t know. But it will be bad. The future does not look good for them.

Nor does it look good for the chickens in the pens and the cows needing to be milked and the dogs tied to the pole or inside the car while the master is inside getting coffee. I try not to think about it. It is just one of the many tragedies that will occur during this time. After all, Jesus Himself said “For then shall be great tribulation, such as was not since the beginning of the world to this time, no, nor ever shall be. And except those days should be shortened, there should no flesh be saved: but for the elect’s sake those days shall be shortened.” (Matthew 24: 21-22). It will be a very bad time, for not only the people but for the animals who suffer under the same corrupted earth that we do. The entire creation groans and will groan harder when the Great Tribulation arrives. I try not to think about it.

I take encouragement from something Texas Baptist Pastor Don Fawcett said, “For the creation was subjected to futility, not willingly, but because of him who subjected it, in hope, that the creation itself also will be set free from its slavery to corruption into the freedom of the glory of the children of God. For we know that the whole creation groans and suffers the pains of childbirth together until now.” Romans 8:20-21. It seems abundantly clear from this verse that 1) the entire creation was subjected to decay and corruption due to sin, 2) animals and pets are created beings, 3) animals and pets are subject to corruption as part of the fallen world, 4) Christ, in his atonement, undid the sin/death principle for all corrupted creation, 5) at the eschaton, all things that have been effected by sin and corruption unwillingly will be restored. So, my conclusion- animals or pets in heaven? Animals? No doubt. Personal pets? I don’t know but it is certainly within the scope of biblical theology.” —end quote

I would like to agree with this. It is certainly within the scope of possibility.

I know God is good. His thoughts are above our thoughts and His plans are always working together for the good and His glory. It comes down to trust. I trust His thoughts and I trust His ways. After all, He sent Jesus to us. He sent the Holy Spirit to us. He sent the Bible to us. He knows whither a sparrow falls and He knows our emotions and needs. Maybe He will send Fluffy and Scrappy to us! Heaven is perfection, and so, it will be perfect. I trust that with all my soul.

Will our Pets be Raptured with Us?

*Editor’s Note: For some reason, likely satan in order to steal future hope, the doctrine of the Rapture has become controversial. People say they don’t believe it will happen, in effect saying that Jesus plans to drag His Bride through the mud in wrath and judgment. I am not going to allow debate on the topic. I studied eschatology for ten years and have come to a settled conclusion that the order of events facing humankind is next the rapture, then the Tribulation, then Jesus returns in His Second Coming, the 1000 year kingdom on earth AKA Millennial Kingdom) then final judgment of all humankind then eternal state on a New Earth. If you do not believe in the rapture then this essay is not for you, why read it? Just go your way in peace. If you are not sure about the end of all things (eschatology doctrines) then I am happy to share from the Bible what it says on this topic. Not “I think”, not “I believe” but a conversation based on biblical fact. I’m open to that. Thank you.

3 thoughts on “Pets and the Rapture*”

God’s judgment helps us know who God is. God is love, yes, but God is also thrice holy and hates sin. He is angry with sinners every day and will eventually in his timing pour out judgment upon this sinning world. He has already done so, once. The Flood. Tune in to hear more about what the Bible says about judgment The Wrath of God God’s judgment defended: A sermon from RC Sproul Biblical definition of God’s Wrath What does the Bible say about when God will judge us? This episode is also available as a blog post: https://the-end-time.org/2022/01/21/gods-four-sore-judgments-introduction-2/

What Distresses You? By RUTH BRYAN
Seeming Contradictions
Embracing the Truth
Are usurping authority and teaching, two different activities or are they the same?