We are in a war. We forget, but we are under constant attack. We know that since the beginning, we have been attacked on any and all fronts by Satan. It’s more apparent now, especially in America, than when I started his blog 11 years ago.

Worse, our enemy, satan, has over a 6000 year head start on us here in the end of the end times. Paul spoke of our warfare in 2 Corinthians 10:3-4; “For though we walk in the flesh, we do not war according to the flesh, for the weapons of our warfare are not of the flesh, but divinely powerful for the destruction of fortresses,”

It is a good warfare.

“This charge I commit unto thee, son Timothy, according to the prophecies which went before on thee, that thou by them mightiest war a good warfare; Holding faith, and a good conscience; which some having put away concerning faith have made shipwreck:” (1 Timothy 1:18-19)

It is constant warfare: “Be sober, be vigilant; because your adversary the devil, as a roaring lion, walketh about, seeking whom he may devour:” (1 Peter 5:8)

Jesus in us is greater than anything. We do not fight with bombs nor with planes or with sword. We fight with prayer, appealing to Him Who is above all things to intercede. We fight with knowledge of His word. We fight with faith. It IS a time when satan will be doing his utmost to interrupt or break any Christian’s faith and to prevent any faithless person from becoming a believer. It is a dangerous time, in the physical and in the supernatural. The principalities and powers may gather for their final fight (Ephesians 6:12) because satan knows his time is short (Revelation 12:12), but we stand in Jesus’ victory.

So be sober, be vigilant!

Any day any one of us may suffer a spiritual attack. I see them occurring in my own circle of friends. Little to big things; physical infirmities to character attacks to arguments and division at otherwise healthy churches. We can look at it as an opportunity to stand on Jesus’ strength. It is an opportunity to pray in advance. It is an opportunity to follow Peter’s command to be sober and vigilant. And following a biblical command is always good, no matter the circumstance surrounding the need for it.

It may be hard, but we don’t have a spirit of fear, but we walk in His strength. 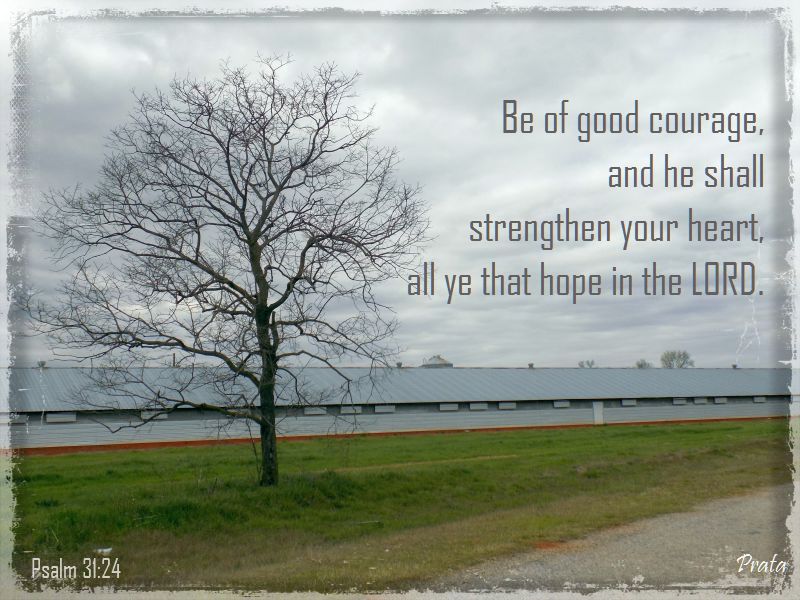 One thought on “Strength, courage, perseverance”