1 Corinthians 9:24
Do you not know that those who run in a race all run, but only one receives the prize? Run in such a way that you may win.

Hebrews 12:1
Therefore, since we have so great a cloud of witnesses surrounding us, let us also lay aside every encumbrance and the sin which so easily entangles us, and let us run with endurance the race that is set before us

Acts 20:24
“But I do not consider my life of any account as dear to myself, so that I may finish my course and the ministry which I received from the Lord Jesus, to testify solemnly of the gospel of the grace of God.”

2 Timothy 4:7
I have fought the good fight, I have finished the course, I have kept the faith

Christianity has run a relay race since the moment that the Holy Spirit descended upon the first ones in the upper room. They fanned out in the courtyards, the city, and then the world, bringing the Good News to all who would hear. Many were persecuted and were killed for their faith, but they were diligent in the relay to ensure their careful obedience to the Spirit so that there would be a baton to hand to the next generation.

The second wave, no longer witnesses to the earthly Glory of Jesus, walked and preached and shared the Good News in their homes and churches and on the streets. They ran their race, fought the good fight, and they handed the baton to the next generation to carry on, even as they expired their last as the lions roared in the rings or were stoned like dogs by rabid crowds. And so it went, through the decades and the millennia.

The race was run through the early years until Christianity was adopted by Constantine in 312. It ran through the bloody, plague years of the Dark Ages, brothers and sisters killed as they insisted on their right to carry a personal Bible or to relate the Gospel themselves and not through a priest. The relay was run through the Renaissance years when art and music began to shift to Godly representations instead of pagan ones. The baton was handed to the missionaries of the 1700 and 1800s, who went to the four corners of the earth, proclaiming and sharing. The baton was handed to the next, the Greatest Generation we are told, who lived Godly lives and won wars and shared the Good News in joy. Finally, through all the eons and years and travails, we, perhaps the last generation, now have the baton. We are running our race now.

Each generation lay aside every encumbrance and the sin which so easily entangled them, and they ran with endurance the race that was set before them. They were obedient to the Spirit who gave them strength to hold the baton with steadfastness and in so doing kept the flame of faith alive.

Can we see the finish line? Some believe we can. I do. Will we faint before we cross it? Will we stop sharing the Good News, preferring tickled ears? Will we be diligent enough to testify solemnly of the gospel of the grace of God in the face of hatred and persecution we know is coming? Will we stumble?

Let it not be so! We must finish the course with faith, working till the last. We must not drop the baton. We must finish the course, the Christian race that our forefathers and mothers ran. We are part of the same body and in the same race. Race on, brothers and sisters! Hold fast to the baton of faith, carrying it joyfully as we cross the line and then kneel at His feet forever! Jesus waits to greet us as He proclaims the course finished and to say “Well done good and faithful servants!” For when Jesus calls us home through the Rapture, in joy and solemnity, we can hand the baton back to Him closing the circle from the first Saints who shared the faith. 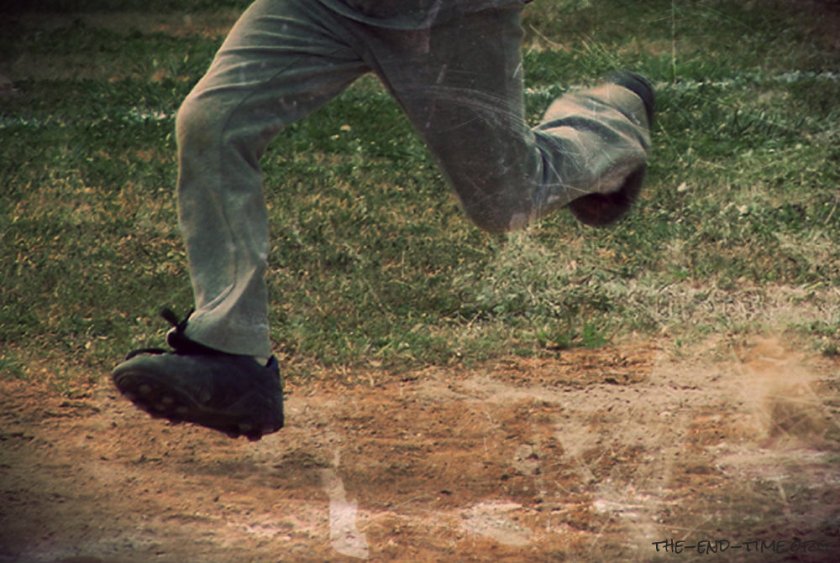 One thought on “Keep running the race!”