You have set our iniquities before you, our secret sins in the light of your countenance. (Psalm 90:8)

We all have secret sins. Some of them we knowingly perpetrate and feel guilty about. Other sins, we consider “acceptable”. A few, like David, we sin without even knowing we’re sinning. (Psalm 19:12).

There is a troubling set of chapters near the beginning of Ezekiel that reflect the truth that secret sins are not hidden from God’s eyes. In Ezekiel 8, the prophet is brought to the temple in Jerusalem in the spirit. There, Ezekiel was shown four scenes depicting how far the Israelites had fallen, and how desecrated the Temple really was.

On the outside, all looked normal. People were sacrificing, going in and coming out, prayers were being uttered, it was a busy place. But if you looked beneath the surface what was happening was a grief and a horror.

In the first scene, Ezekiel is shown the ‘the entrance of the gateway of the inner court that faces north, where was the seat of the image of jealousy, which provokes to jealousy.” (Ezek 8:3b). This is likely some statue or idol that provokes God to jealousy for his people. Many commentators believe it was an Asherah pole. The first commandment was being broken. Ezekiel’s guide said, ‘wait, it gets worse.’

Ezekiel was shown another abomination, at the “north gate of the house of the LORD, and behold, there sat women weeping for Tammuz”. Easton’s Bible Dictionary says, “Tammuz was a false god, the husband of the goddess Ishtar. In the Chaldean calendar there was a month set apart in honour of this god, the month of June to July, the beginning of the summer solstice. At this festival, which lasted six days, the worshipers, with loud lamentations, bewailed the funeral of the god, they sat “weeping for Tammuz” (Ezek. 8:14).”

Thus, the women at the Temple of the One True God sat weeping for a false god, who dies every year. They weep for a dying god. Another abomination.

Worse, Ezekiel is shown “about twenty-five men, with their backs to the temple of the LORD, and their faces toward the east, worshiping the sun toward the east.” (Ezekiel 8:16b).

One more scene, in my opinion, the worst of all. Ezekiel is told to dig though a wall to an inner, secret room adorned with every creeping thing and loathsome beasts. 70 of the elders of Israel were performing rites and worship to these awful images. The guide had shown Ezekiel things he called abominations but this one he called “vile abominations.” Worse, a man is named, he was from a good family, Ja-azaniah. His father had helped Josiah cleanse Israel from false worship.

No one is sure in interpreting this passage whether the room was an actual secret room in the temple painted with these putrid murals, or was symbolic of what men cultivate in their hearts. Many believe it was an actual room, one of the inner storage rooms, and that the scene was actual with these leaders performing false religious practices. It absolutely could be real, because this kind of false worship had happened in the temple during the reign of Ahaz. If symbolic, it represents the chambers of the heart that are in fact, idol making factories, as Calvin said.

Now to the point: verse 12. Then he said to me, “Son of man, have you seen what the elders of the house of Israel are doing in the dark, each in his room of pictures? For they say, “The LORD does not see us, the LORD has forsaken the land.'” This point is repeated in Ezekiel 9:9. Whether they thought the LORD was unobservant or that He truly couldn’t see into the secret rooms or the chambers of their heart is terrible in the extreme, for it impugns the character and omniscience of God.

They thought the LORD had forsaken the people, so they worshiped other gods. Did they really believe that God does not see? They did.

Secrecy is a delusion. No amount of busy-ness or pretend overlay hides a false worship. (Revelation 3:1) No amount of secret rooms or darkness obscures what the God of Light can and does see. I don’t want to be uncharitable, but sometimes I think some of what goes on at the ERLC or in the back rooms of the Southern seminaries are kind of like the hidden rooms in Ezekiel’s vision. I say this as a member of the denomination, and what I see happening troubles me.

The elders suffered from the delusion of secrecy. They thought they could act without being seen, and though primarily their secrecy was directed at their people, at a deeper level it was an attempt to remain secret from God. Yet Ezekiel is standing there, and God is with him observing the action.
There are no secrets from God. To act as if there were is the height of folly….All speech and behavior should be conducted from an awareness that there are no secrets from God. ~Ezekiel, Peter C. Craigie

It is best to do like David, repent of sins we are even unaware we commit, buried too deeply in the hidden chambers of our heart, or sins when we unknowingly hurt someone.

Who can discern his errors? Declare me innocent from hidden faults. (Psalm 19:12).

And worship, sing, and do our business in the light, not the dark. 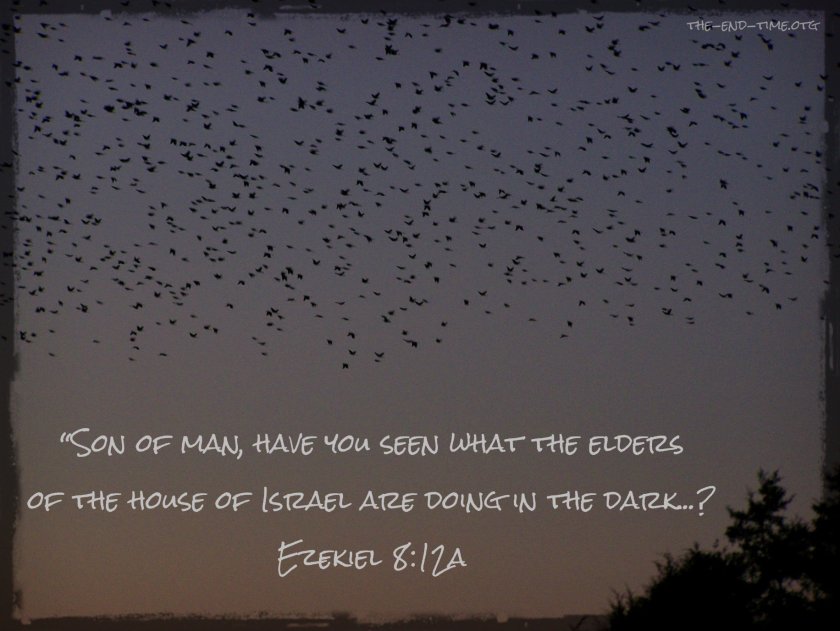 Thinking about marriage and how foundational strong marriages are to make a strong society, and when marriage is redefined or disposed of, how that affects everything else in society like ripples in a pond. Center for Christ and Culture article: Why is marriage important?  This episode is also available as a blog post: https://the-end-time.org/2022/05/19/marriage/

Lunch: Homemade baba ganoush with corn chips, and a small salad of lettuce, Kalamata olives and feta.
How did satan become so evil? Where did evil come from?
EPrata photo
EPrata photo
EPrata photo
I love seeing the Amazon box in my parcel locker. My end of year splurge: socks, silicone muffin cups (for the air fryer), a new strainer (boy did I need one!) and two books: commentary on Judges and a Puritan Paperback. I'm ready for summer cooking and reading!
Follow The End Time on WordPress.com