I grew up in a household that rejected God. I didn’t go to church except once in a while as a sputter here and there. I knew nothing of the Bible.

My parents were both readers. I’m glad, I turned into a reader then a student of literacy then a teacher of reading. Some of the books I remember being most read around my home were typical books of the pagan bookshelf.

I’m OK, You’re OK, 1967: a self-help book by Thomas Anthony Harris. It is a practical guide to transactional analysis as a method for solving problems in life. It stayed on the bestseller list for two years.

I’ll never forget that yellow cover, It was a highly visible book. Now that I’ve grown and like design, I see it as a typical design of the mid-century. I see psychology for what it is, a pale and paltry copy of the true answers of life, which reside in Jesus. Psychology seeks answers within one’s self, where no answers will ever emerge. Only confusion.

The Gnostic Gospels by Elaine Pagels, 1979: “Long buried and suppressed, the Gnostic Gospels contain the secret writings attributed to the followers of Jesus.”. How long will we be plagued by spurious claims that the REAL story of Jesus is suppressed and waiting to come out.  The world does not want the true Jesus. But another that comes in His name, they will accept him. (John 5:43).

Jonathan Livingston Seagull, Richard Bach, 1970, “Jonathan Livingston Seagull, written by Richard Bach and illustrated by Russell Munson, is a fable in novella form about a seagull who is trying to learn about life and flight, and a homily about self-perfection.” Another book promising answers if we only look within, and one that caught the fancy of the American psyche for several years. By the end of 1972 over a million copies were in print. This book was everywhere. A new edition was just republished in 2014. The world never tires of hearing that we possess the answers to life and can self-perfect. No savior needed.

Body Language, by Julius Fast, 1971. “This classic books introduces kinetics, the science of non-verbal communication, which is used to analyze the common gestures we use and observe every day, gestures which reveal our deepest feelings and hidden thoughts to total strangers―if they know how to read them.”

Ah, we all want to know hidden thoughts. We all want to be little gods reading thoughts as the omniscient God does. ‘You will be like God’ said the serpent, in Genesis 3. This book hung around a lot at my house, too. I noticed that it was revised and updated in 2002. Where before the cover showed a woman demonstrating body language that’s “closed,” the updated version for the new millennium the woman is shown as displaying “open”. 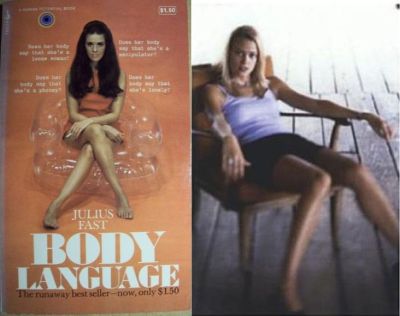 I heard Martyn Lloyd Jones preaching a certain sermon in Acts. He mentioned a book by Rosalind Murray written during WWII, called The Good Pagan’s Failure. This review of the book states,

It is Rosalind Murray’s contention that the crucial difference which separates and divides us as human beings is, and always must be, spiritual, exemplified by an acceptance or rejection of belief in God. “Our attitude on this fundamental question determines the whole direction of our living in all of its aspects, and in all relations, and that opposition in this one decisive matter implies secondary, but resultant, opposition in outlook and in value throughout our lives.” … “The Good Pagan’s failure,” Murray writes, “can be attributed to the fundamental illusion from which he starts, the belief that it is possible to conserve all positive and constructive value of the Christian order while removing it from belief in God.” source

All the non-fiction books on the pagan’s bookshelf seeking answers are only wisps of false wisdom coupled with temporary solutions. I’m blessed that God protected me from absorbing these humanistic anti-God philosophies while I was at the impressionable stages. I read the Seagull book, and parts of I’m OK, You’re OK, and even the Gnostic book, which was read and re-read voraciously at my house. None of them made sense to me.

In His timing, the Lord gave me the mind of Christ, and now the Bible makes the most sense. It immediately showed me the order, beauty, and consistency in the world. It let me understand that there is no such thing as chaos, only hidden order through providence. I learned I had no wisdom of my own and that all I did was vanity and striving after wind. Yes. This is the wisdom of the ages, and God has it in infinite quantities. How blessed we are that He shared it in His word.

The good pagan’s failure is that she is seeking wisdom within her self. The Christian sister seeks it from the Lord. Good pagan? I’d rather be a depraved but saved sinner. My bookshelf is now filled with Bibles, commentaries, and books on seeking Jesus.

I said in my heart, “I have acquired great wisdom, surpassing all who were over Jerusalem before me, and my heart has had great experience of wisdom and knowledge.” And I applied my heart to know wisdom and to know madness and folly. I perceived that this also is but a striving after wind. For in much wisdom is much vexation, and he who increases knowledge increases sorrow. (Ecclesiastes 1:16-18).