Shootings are horrible. Children who die in shootings is horrible. I work in a school. School shootings make me quake like no other. The reality as close to living a High School shooting as it’s possible to live, yet not be there was depicted on the Canadian TV show 19-2, season 2.1.

The episode was actually based on the Montral Dawson College shooting in 2006. Canada was not quite ready for the revisiting, even in dramtic TV form 9 years later, but they got it anyway.

Not that I’d want to live through it, but the way the series presents the situation realistically, but not gratuitously, & w/that famous long unbroken 13-minute single camera scene, haunts me. If you want to know what living through a shooting is like as a cop, a high school student, or a parent, watch 19-2’s episode of “School“.

The Canadian magazine The Star wrote, “an episode that includes 60 of the most breathtaking minutes on television.”

I see tweets and comments making jokes about the El Paso mall shooting that occurred today in which 20 were killed and 24 were wounded. Some were children. Jerks immediately began politicizing it or over-layering race and ethnicity into it. After you watch “School“, then go ahead and politicize, joke, or crack wise about shootings. If you do, you will know you are mentally dead, emotionally putrid, and politically void. 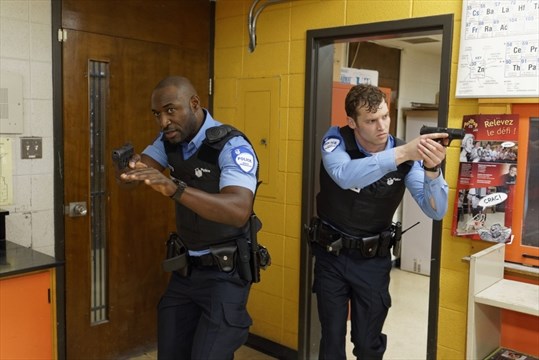 Show me the scripture! - The End Time Blog Podcast

I liked this Christian Courier article, It’s clear and offers simple examples of coming to necessary conclusions. The only statement in the article with which I disagree was that “babies have no sin.” They do. See next link for the thorny discussion of babies, heaven, sin, and hell. Christian Courier: What is a Necessary Inference? (Grace To You: Do babies and others incapable of professing faith in Christ automatically go to heaven?) The Master’s Seminary: Resurrection according to scriptures? The Cripplegate: The Unteachable Key to Biblical Wisdom This episode is also available as a blog post: https://the-end-time.org/2021/10/26/show-me-the-scripture/