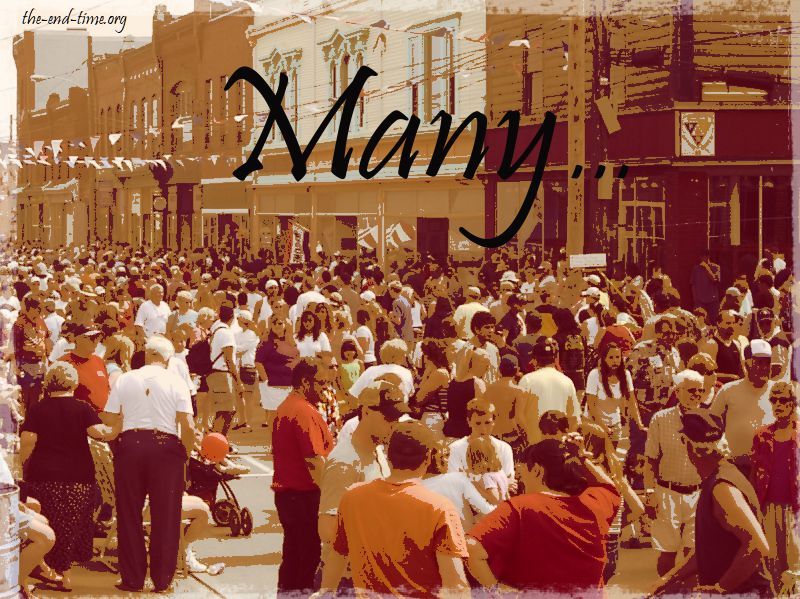 Jesus doesn’t just give comforts and ease in His sermons. He healed, yes. He promised rest and peace for the repentant, yes. But He also issued dire warnings to the unsaved, the hypocrite, the haughty sinner and so on. He said twice in Matthew 7 that ‘many’ will not get to heaven.

We understand the word many here in the English language. It meas ‘lots.’ But studying the Bible means delving. In the Greek language the New Testament was originally written in, there are nuances and depths of meaning and shades to words. So in the Greek, what does ‘many’ mean? This is of concern, of course, because none of us want to be caught in the net of ‘many’ on the Day of Judgment.

Enter by the narrow gate. For the gate is wide and the way is easy that leads to destruction, and those who enter by it are many. (Matthew 7:13)

Strong’s Exhaustive Concordance for the meaning of many as used in these two verses is the same word: polýs – many, high in number; multitudinous, plenteous, “much”; “great” in amount (extent).

You might recognize the prefix we use in the English- poly.

The word means so much, to such a great extent. Jesus compares one thing to another quite often, Here, it’s many and few. Compared to the saved, the number who are going to be cast into hell are many Matthew Henry sums up with this:

It’s sobering to think of the entire world drowned except for 8 people. I think that we truly underestimate the depth of our sins as humans. The saved understand we are thoroughly depraved, but until confronted with the holiness of God, we really don’t understand. The few who were confronted with it and lived, (Daniel, Isaiah, John, Job, etc) immediately fell as dead men writhing about their own putridness. So it is hard to look at a large number of unsaved, especially when so many of them are pious and Christian seeming. But there will be “many.”

And because we have a hard time grasping the depth and treachery of sin, we tolerate it.

Is it possible for Christians and the church to be too forgiving? Revelation 2:20 (NAS): “But I have this against you, that you tolerate the woman Jezebel…” “Tolerate” is the same word “to forgive” (ἀφίημι). The answer is yes, especially when it comes to abiding sin!

Here is Matthew Henry on the ‘many’ and the ‘few’ in the Matthew 7:15 verse above.

Here is, (1.) An account given us of the way of sin and sinners; both what is the best, and what is the worst of it.

[1.] That which allures multitudes into it, and keeps them in it; the gate is wide, and the way broad, and there are many travellers in that way. First, “You will have abundance of liberty in that way; the gate is wide, and stands wide open to tempt those that go right on their way. You may go in at this gate with all your lusts about you; it gives no check to your appetites, to your passions: you may walk in the way of your heart, and in the sight of your eyes; that gives room enough.” It is a broad way, for there is nothing to hedge in those that walk in it, but they wander endlessly; a broad way, for there are many paths in it; there is choice of sinful ways, contrary to each other, but all paths in this broad way. Secondly, “You will have abundance of company in that way: many there be that go in at this gate, and walk in this way.” If we follow the multitude, it will be to do evil: if we go with the crowd, it will be the wrong way. It is natural for us to incline to go down the stream, and do as the most do; but it is too great a compliment, to be willing to be damned for company, and to go to hell with them, because they will not go to heaven with us: if many perish, we should be the more cautious.

[2.] That which should affright us all from it is, that it leads to destruction. Death, eternal death, is at the end of it (and the way of sin tends to it),—everlasting destruction from the presence of the Lord. Whether it be the high way of open profaneness, or the back way of close hypocrisy, if it be a way of sin, it will be our ruin, if we repent not.

(2.) Here is an account given us of the way of holiness.

[1.] What there is in it that frightens many from it; let us know the worst of it, that we may sit down and count the cost. Christ deals faithfully with us, and tells us,

First, That the gate is strait. Conversion and regeneration are the gate, by which we enter into this way, in which we begin a life of faith and serious godliness; out of a state of sin into a state of grace we must pass, by the new birth, Jn. 3:3, 5. This is a strait gate, hard to find, and hard to get through; like a passage between two rocks, 1 Sa. 14:4.

There must be a new heart, and a new spirit, and old things must pass away. The bent of the soul must be changed, corrupt habits and customs broken off; what we have been doing all our days must be undone again. We must swim against the stream; much opposition must be struggled with, and broken through, from without, and from within. It is easier to set a man against all the world than against himself, and yet this must be in conversion. It is a strait gate, for we must stoop, or we cannot go in at it; we must become as little children; high thoughts must be brought down; nay, we must strip, must deny ourselves, put off the world, put off the old man; we must be willing to forsake all for our interest in Christ. The gate is strait to all, but to some straiter than others; as to the rich, to some that have been long prejudiced against religion. The gate is strait; blessed be God, it is not shut up, nor locked against us, nor kept with a flaming sword, as it will be shortly, ch. 25:10.

Secondly, That the way is narrow. We are not in heaven as soon as we have got through the strait gate, nor in Canaan as soon as we have got through the Red Sea; no, we must go through a wilderness, must travel a narrow way, hedged in by the divine law, which is exceedingly broad, and that makes the way narrow; self must be denied, the body kept under, corruptions mortified, that are as a right eye and a right hand; daily temptations must be resisted; duties must be done that are against our inclination. We must endure hardness, must wrestle and be in an agony, must watch in all things, and walk with care and circumspection. We must go through much tribulation. It is hodos tethlimmenē—an afflicted way, a way hedged about with thorns; blessed be God, it is not hedged up. The bodies we carry about with us, and the corruptions remaining in us, make the way of our duty difficult; but, as the understanding and will grow more and more sound, it will open and enlarge, and grow more and more pleasant.

Thirdly, The gate being so strait and the way so narrow, it is not strange that there are but few that find it, and choose it. Many pass it by, through carelessness; they will not be at the pains to find it; they are well as they are, and see no need to change their way. Others look upon it, but shun it; they like not to be so limited and restrained.

What a blessing we have in the ark of Jesus, saved through the storm and floods of His wrath. Repent and believe the Gospel, (Mark 1:15) and you will join the “few” who love Him more than our sins, the devil, and the world.

Daily Murray: He visits me during the day, then goes off for naps, repeat. But there's one thing I can count on. When I go to the bathroom, no matter where he is or what he's doing, comes to sit in front of me and stare. Every breath I take, every move I make, he's watching me...
Patio lights in the rain
Today's cloud