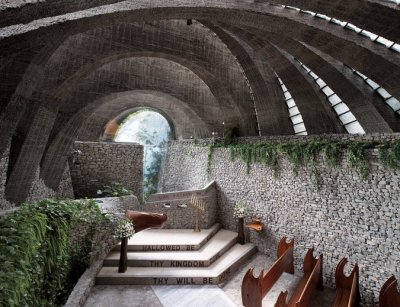 It’s the Hoshino Wedding Chapel in Karuizawaprefect, Japan. What a beautiful blend of function and form. Solaripedia gives this description from an energy savings point of view-

[T]he sloping stone base of this wedding chapel unites the ascending concrete arches that project up and out of the natural terrain. For insulation from the cold, the self-supporting concrete arches are separated by double glass. The chapel turns in plan towards the south, affording a more uniform distribution of solar radiation from the sun that rolls westerly across the sky. The chapel is radiant heated by tubes of water in the floor. The thermal mass of rock, concrete, and marble floors make it energy effective. The doors, pulpit and pews were designed and hand-crafted from fine cherry wood on the site in a design-build process. As in Nature, the engineering of this chapel represents an integral expression of form. The number-one wedding chapel in the world, this wedding chapel provides more than 4000 weddings a year.

The New York Times says this:

There is not a single right angle in the Hoshino Wedding Chapel’s cascading concrete arches and soaring interior of inlaid stone.

Form and function, it’s a beautiful and delicate balance, especially when seen in in the animal world. a balance God achieved in just 6 days.

Spirals are beautiful and soothing. American Scientist says this about the logarithmic spiral-

“Of the numerous mathematical curves we encounter in art, geometry, and nature, perhaps none can match the exquisite elegance of the logarithmic spiral. This famous curve appears, with remarkable precision, in the shape of a nautilus shell, in the horns of an antelope, and in the seed arrangements of a sunflower. It is also the ornamental motif of countless artistic designs, from antiquity to modern times. It was a favorite curve of the Dutch artist M. C. Escher (1898–1972), who used it in some of his most beautiful works, such as Path of Life II.”

“The many intriguing aspects of the logarithmic spiral all derive from this single feature. For example, a straight line from the pole O to any point on the spiral intercepts it at a constant angle α. For this reason, the curve is also known as an equiangular spiral. As a consequence, any sector with given angular width Δθ is similar to any other sector with the same angular width, regardless of how large or small it is. This property is manifested beautifully in the nautilus shell ( left ). The snail residing inside the shell gradually relocates from one chamber to the next, slightly larger chamber, yet all chambers are exactly similar to one another: A single blueprint serves them all.”

Hrm, evolution didn’t cause such perfection, regularity, and beauty. The ‘single blueprint’ is God. As you go around today praise Him who made the earth and all that is in it. (Psalm 24:1). He didn’t have to make it beautiful, but He did. Man copies what is soaring and sublime, he can only copy the beauty that originates from and emanates from God.