I first warned about “Adult Christian Coloring” in November 2015 in an essay that also covered Bible Art Journaling. I’d written– 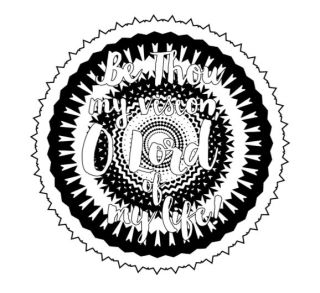 Definition of mandala: Mandala (Sanskrit Maṇḍala, ‘circle’) is a spiritual and ritual symbol in Indian religions, representing the universe. The basic form of most mandalas is a square with four gates containing a circle with a center point. In Hinduism, a mandala (yantra) is a two- or three-dimensional geometric composition used in sadhanas, puja or meditative rituals. It is considered to represent the abode of the deity. Each yantra is unique and calls the deity into the presence of the practitioner through the elaborate symbolic geometric designs. According to one scholar, “Yantras function as revelatory symbols of cosmic truths and as instructional charts of the spiritual aspect of human experience”. (source)

Do you really think it’s innocent to color a mandala just because some money-grubbing, undiscerning author re-packaged a pagan activity by pasting a line from a beloved hymn over the top of it and adding “Christian” to the title?

In June 2013 I’d also warned about mandalas, that time, in the form of prayer circles.

Here is Todd Friel from Wretched.tv on Adult Coloring Books, a 7-minute summation concisely explaining why Christians should not engage in that activity.

Christianity is meant to be distinct, and contain set apart people. (Deuteronomy 7:6-11). The Levitical Laws were to visibly demonstrate this, and nowadays in New Testament times our pursuit should be toward holiness and purity in individual lives and in corporate church lives. We are set apart. (1 Peter 2:9, Psalm 4:3, 1 John 4:4-5).

However with lack of discernment, so many Christians are allowing rituals from pagan religions to filter in. Labyrinthes, prayer beads, Mandalas, Yoga, Contemplative Prayer, Circle Making- it boggles the mind. Yet the acceptance of these non-Christian practices causes one to say- Why ‘Christian’ No Longer Means What It Used To, as Sunny Shell wrote last month–

As I consider how the Bride of Christ is shamefully defiling herself with vain and worldly philosophies, rather than cleansing and strengthening herself with the Word of God, these words from our heavenly Father come to mind, “Folly is bound in the heart of a child, but the rod of discipline drives it far from him” (Prov 22:15), “When I was a child, I spoke like a child, I thought like a child, I reasoned like a child. When I became a man, I gave up childish ways.” (1 Cor 13:11),

Dear precious sister, give up childish ways. As Todd Friel said, adult coloring books are a child’s activity, where we learned motor skills and how to color within the lines.

As we grow, we move to adult activities such as killing the flesh, carrying our cross, and persevering in prayer. Put away childish things, and “grow in the grace and knowledge of our Lord and Savior Jesus Christ. To him be the glory both now and to the day of eternity. Amen.” (2 Peter 3:18)

Our God!
EPrata photo
The God of contemporary Christianity!
EPrata photo
PODCAST & BLOG
Who does He think He is?
Follow The End Time on WordPress.com