Joel Rosenberg is in Israel. He just wrote:

“The situation here is rapidly going from bad to worse. It is nearly midnight here, and the battle between Hamas and Israel has been intensifying hour by hour throughout the day. Hamas, Islamic Jihad and other Palestinian terror organizations — all backed by Iran — are firing rockets, missiles and mortars at innocent civilians in Israel, along the southern border. Each act is a war crime. The Iranian-backed terrorists are also firing from behind innocent civilians in Gaza, often from hospitals, mosques and schools. Thus, each act is actually two war crimes. In just the past several hours, the terrorists have fired more 50 times at Israel. That’s more than 100 war crimes. Since Saturday, they have fired at Israeli civilians more than 200 times. That’s more than 400 war crimes. Yet the world is paying very little attention and doing little to stop the terrorist attacks. Israel, therefore, is moving swiftly to defend herself.”
—————————–
A poignant Tweet: Avital Chizhik ‏@avitalrachel wrote–

“In a bomb shelter in Netivot, after 55 rockets fired in the past few hours alone. Not that anyone cares #Hamas #rockets” 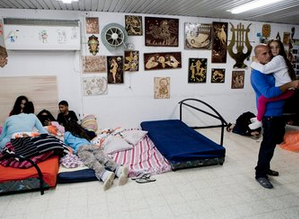 —————
What a difference 8 hours makes. this morning I was looking at the earthquakes and the US mess. As I got home from work I see that in the meantime, the Middle East went to hell. Literally.

I’d written on Sunday that Israel was getting hit from the north and south, and being squeezed in the middle from east to west. This refers to the shelling by Syria into northern Israel, the shelling into southern Israel by Hamas from the Gaza Strip, and the Palestinian Authority’s push to upgrade the Palestinian Authority in the UN to Observer State. The exchange with Syria at the Golan Heights was the first in 40 years, and the shelling in the south is becoming interminably horrific for the residents there, who can hardly live normal lives. The push by PA Abbas at the UN would also be a stick in the eye for Israel. So, how much can they take?

It appears that the line has been crossed. Today, Israel hit Hamas where it hurts, making a rocket strike in Gaza that was targeted to and killed their leader Ahmed Jabari, the head of its military wing. Israel’s Shin Bet domestic intelligence service confirmed it had carried out the attack, saying it had killed Jabari because of his ‘decade-long terrorist activity’

Hamas said that this event would “open the gates of hell.”

Here is the Israel Defense Force video of the assassination:

There might be a ground war as a result of this, with Israel saying they are prepared to go into Gaza with forces, if need be. “Israeli media are reporting that the IDF is sending emergency call-up notices to reservists. IDF General Yoav Mordechai told Channel 2 news ground troops may be sent into Gaza: “There are preparations, and if we are required to, the option of a entry by ground is available.”

Predictably, even though Hamas has been shelling Israeli civilians and children for weeks, “Palestinian President Mahmoud Abbas asked Arab League Secretary General Nabil al-Arabi to call an emergency meeting of the League’s Council to denounce “dangerous Israeli escalation and brutal aggression on our people in the Gaza Strip”.”

This latest escalation of the parties, which brings them to the brink of war, is called on the Israeli side, “Operation Pillar of Cloud.” You will remember from the Old Testament that a pillar of cloud led the Israelites in the desert by day. At night it was a pillar of fire.

Maybe not as predictably, but certainly prophetically, the Egyptians sided with Hamas.

There is a prophecy in Isaiah that is yet unfulfilled. I am not talking about the unfulfilled prediction that Damascus will be destroyed (Isaiah 17:1). I am talking Isaiah 19 and Egypt.

The opening of Isaiah 19 begins like this, with another reference to a cloud!

“An oracle concerning Egypt.  Behold, the Lord is riding on a swift cloud and comes to Egypt; and the idols of Egypt will tremble at his presence, and the heart of the Egyptians will melt within them. And I will stir up Egyptians against Egyptians, and they will fight, each against another and each against his neighbor, city against city, kingdom against kingdom; and the spirit of the Egyptians within them will be emptied out, and I will confound their counsel; and they will inquire of the idols and the sorcerers, and the mediums and the necromancers; and I will give over the Egyptians into the hand of a hard master, and a fierce king will rule over them, declares the Lord God of hosts.” (Isaiah 19:204)

The harsh master is probably the antichrist. But we cannot say for sure.

Joel Rosenberg wrote a piece called “What does the bible say about the future of Egypt?” He produced this video at the tail end of the revolution which ousted Hosni Mubarek at the end of the Arab Spring.

Is this the time for Isaiah 19 to come true, with the beginning of fulfillment in seeing a ground war between Gaza, Egypt and Israel?  Possibly. Probably, actually.

Please keep praying and keep aware of events. Keep reading your bible. It has so much to say about these times. For example, of all the names the Israelis could have used, the Pillar of Cloud is one that not only figures into their history past but is part of Isaiah 19 and history future. We will watch to see if that future history has arrived.