Some news today for you. Bible thoughts at the end.

103 Dead in Southern Russia Floods
“Intense flooding in the Black Sea region of southern Russia killed 103 people after torrential rains dropped nearly a foot of water, forcing many to scramble out of their beds for refuge in trees and on roofs, officials said Saturday.” (Photo BBC)

“Torrential rain sweeping across much of Britain is bringing widespread flooding to homes and businesses in its wake. Some areas are expected to receive up to one month’s rainfall in 24 hours. Farmers have been urged to move livestock from low-lying fields, summer concerts have been canceled and the British Grand Prix at Silverstone is facing a washout.”

6.3 earthquake in Vanuatu yesterday. Some of the volcanoes have calmed down. Here is a volcano report:

“A sedate day in volcano land. The on-going volcano-seismic crisis at El Hierro (Canary Islands) while not over, appears to be on the wane. Bursts of spasmodic tremor have become less frequent and are of lower amplitude than when the crisis began last month. Tremor has dropped to even lower levels at Nevado Del Ruiz volcano (Colombia) and the once robust plume of SO2 emitted by the volcano has dwindled. A strong plume of SO2 over the Virunga volcanoes (DR Congo) which became visible (through satellite imagery) during the past few days is not evident on the most recent satellite pass. The plume was the only evidence of increased activity there. There have been no reports of an eruption in the region so far and no earthquakes associated with the plume (unlike that which accompanied plume activity there last month).”

Geologist/volcanologist Erik Klemetti has absconded to MA due to the storms in OH having knocked out his power. He writes that he is out of touch this week with volcano news but is on the way home tomorrow and hopes to get back to it this week, if power has been restored that is. Amazing how much we depend on electricity. I wonder if Edison had any clue?!

As of yesterday, officials are still scrambling to determine what the mystery disease is that is killing Cambodian children. The death toll is up to 64, and has only affected kids under the age of 7. It’s been reported in 14 Provinces.

A Golden Algae bloom has killed thousands of fish in Arizona for 20 miles along the Salt River. Experts say this is a first. It is such a shame when algae blooms and environment disasters like this happen. It really makes me long for the beauty that is coming, a perfect world with untold and unimaginable wonders! (1 Corinthians 2:9).

There is a bad wildfire in Bulgaria, and Israel has offered technology and help to quell it. The temps in Bulgaria are predicted to be very high over the next few days- at least 98 degrees F. But there is now a wildfire in Israel too, that has spread into Jordan.

What a relief, the Presbyterians voted not to ditch Israel. “By a razor-thin margin, the largest Presbyterian group in the United States rejected a proposal Thursday to divest from three companies that do business with Israel. Pro-Palestinian advocates vowed to try again.” It is clear we are losing the church. But not the bride! She is spotless and contains exactly the number of souls the Savior has determined since the foundation of the world. (Rev 13:8).

Call me a curmudgeon but I am tired of the “positive tweeters.” I’m not talking about people who aren’t sarcastic or mean or who work hard at minding their tongue. All those are good things and we all need to work on them, including me. I’m not talking of either secular people who are happy to make conversation and spread cheer. Relentlessly happy people. I am talking of believers who think they are doing the world a service by ONLY tweeting positive about Jesus, the bible, and faith. Like this one:

“Spread love everywhere you go. Let no one ever come to you without leaving happier. Mother Teresa”

Aside from the fact that Mother Teresa was an enemy of God rebelling against Him her whole, long life, and likely residing in hell at this very moment, I am going to be blunt here, this is a ridiculous tweet. I tweeted back,

“What if we share the Gospel in love, and tell them of sin, they get convicted, and leave UNhappier?”

A believer’s language and life is not only a joyride on It’s A Small World or sitting in the Friends fountain clapping happy things. 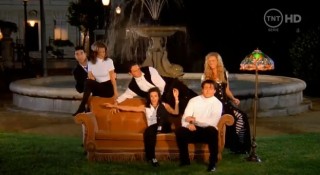 Positive tweeting is a good thing if it is tempered with the notion that not everything we say or do in Jesus makes people happy. And that we have joy, but life is not always “positive.” As a matter of fact, there is a woe about people who constantly think well of you. “Woe to you, when all people speak well of you, for so their fathers did to the false prophets.” (Luke 6:26).

Expressing only what sinful man thinks is “positive” usually leaves out the talk of sin, conviction, and judgment. But those things are part of the Gospel. Our lives in Jesus are full of pain, mourning, lament, grief, and sorrow over our sins, others’ sins, the end of the world, and the persecution of our brethren. That is a fact. Whitewashing it by being relentlessly and exclusively “positive” doesn’t do justice to Jesus. I wonder if positive tweeters ever tweet John 11:35. Or Genesis 6:6.

We do love our enemies (Luke 6:25) but we are to be salt as well. Salt has a medicinal quality that stings when applied. Speaking only positive things and not the whole counsel of God leaves us unbalanced as only Light and not Salt AND Light. Positive tweeters want to give lemonade without the lemons. Anyway, it is a Twitter thing that bugs me. Oh, and I never got a reply to my question.

Don’t forget to read the bible. Not just to listen to good preachers, or read good commentaries, or sing good hymns. All those are edifying but don’t let them substitute for reading the bible straight up for yourself.

I am going through Judges. I re-read chapter 3 & 4 today before going on to chapter 5. Deborah was amazing, wasn’t she! So was Jael. Here is How Judges 5 ends. It is the last line in Deborah’s song:

“Thus let all Your enemies perish, O LORD!
But let those who love Him be like the sun
When it comes out in full strength.”

His wrath will be full strength (Rev 14:10) but His glory is full strength too! Believers will not have to endure the former and will cry with joy when we experience the latter in full strength. He is most worthy to be praised.