I went to Italy in the 90s several times. I always enjoyed the Colosseum. A marvel of Roman ingenuity, architecture, and history, I visited it while admiring all the qualities that make it a famous attraction. I took many photos. My favorite is this one. I had it enlarged and have had it hanging on my wall ever since:

The underground chambers were called Hypogeum and refer to the vast network of rooms, cells, tunnels and passages under the Roman Colosseum. The floor of the Colosseum was over 6 acres, so the hypogeum was easily able to accommodate a huge number of underground tunnels, passages and chambers used to house animals, stage props and slaves who worked there. It was these facts and the thrilling sight of the actual subterranean chambers that entranced me at the time.

Tonight, I was sifting through mounds of photos for a photo project I am doing that is unrelated to Italy, and I came across the photo below. I have visited the Colosseum and I have viewed this photo many times, but never until tonight, the first time I looked at the picture since I’ve been saved, I noticed immediately the cross in the foreground. Immediately. 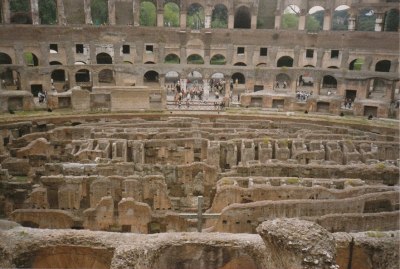 Until now, I had never even seen it. I had never seen it before this moment. Despite having visited the place and lingered there for hours, despite having taken photos from many angles, the cross was simply not in my field of spiritual vision. Why? 2 Cor 4:4 “The god of this age has blinded the minds of unbelievers, so that they cannot see the light of the gospel of the glory of Christ, who is the image of God.” My god at that time was the god of this age, and boy, was I ever blind.

I teared up looking at that simple cross amid the history of the debauchery of the late Roman age. I remembered my history: the Christians that were killed there by lions, their last moments ones of terror, feeling the crunch of the sand under their feet as they perhaps ran from sure death, seeing the lions’ claws reaching for their necks, hearing the roar of the crowd jeering as they drew their last breaths. Their sacrifice kept a nascent religion alive, so that I, wretched I, could visit the place and never even notice the emblem of Christ’s shame and glory.

It was ten years later at age 44 that I came to the cross as a repentant sinner. It was unexpected given my family history, a miracle, truly. It is a testament to the power of the Holy Spirit Who draws those to the cross those whose hearts are not hardened. I was blind, my ears were dulled, but my heart stayed open just a bit, and the truth broke through. I know that others were praying for me, they told me so later. Take hope, praying Christians, for family members and friends who are not saved. The blind DO eventually see, the deaf DO eventually hear. Prayer works. Keep praying for the lost.