North Korea is the most closed nation on earth. Extracting any reliable information from that closed dictator-led nation is near impossible. Still, reports leak out. Depending on the source, some of them are more reliable than others.

There is a recent report that the new dictator, Kim Jong Un, son of the old dictator, Kim Jong Il, held a mass public execution last November 3. November you say, and we’re just hearing about it now? That is how slowly real news leaves the closed and mysterious country of North Korea. If the reports are true at all.

There are more recent reports that the dictator has ordered the execution of 33 Christians, for the crime of having had contact with a South Korean Baptist missionary. Those reports seem more reliable.  Read more here.

I am extremely saddened by these events. We are told that Christians throughout the Church Age will be persecuted or even killed for the faith. It doesn’t make knowing the fact of them happening in front of our faces any easier to take.

However, something that diminishes the honor due missionaries and martyrs who give their life on earth for the faith in a brutal, lonely death is when undiscerning Christians, well-meaning no doubt, fall for easily discovered ruses. Like this: 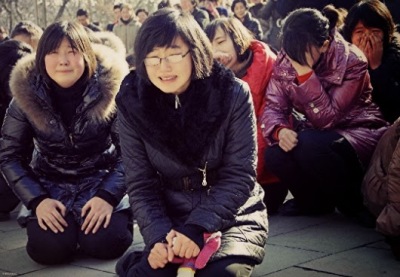 These are not Christians. These are not believers about to be killed. These are young North Koreans mourning the death of their beloved Kim Jong Il, AKA “Dear Leader”, “Superior Person” and “Father of the People.” The are victims, brainwashed and mind-controlled atheists in a locked country, suddenly bereft of their ‘god.’

How do I know this? A 5 second google search yielded this photo published in Russia Today in December 2011, not March 2014. The headline to the article in which this photo originally appeared states,

And the caption states, “Pyongyang residents react as they mourn over the death of North Korean leader Kim Jong-il in Pyongyang (Kyodo / Reuters)”

Please, if we are to test all things regarding what we are taught by bible teachers and preachers, then let’s extend that to testing Christian news before we pass along information about missionaries and martyrs. Far too often on Facebook, twitter, or other social media and blogs, I find mindlessly repeated hoaxes, false information, and just plain obvious ruses that diminish the credibility of Christians. Let’s stay as pure as we can, on behalf of the One of whom we speak. Check it out before you pass it along. In other words, Google is your friend.

Now as to some real news about a N. Korean missionary, this is from Voice of the Martyrs-

UPDATE #2
After being detained for two weeks for attempting to distribute gospel tracts in North Korea, John Short, 75, was released by North Korean authorities on March 2. The Australian missionary, who resides in Hong Kong with his wife, had traveled to Pyongyang as part of a regular tour group on Feb. 15. The following day, he was questioned about the gospel tracts and subsequently detained. Upon his release, he was flown to Beijing, where he was met by officials from the Australian embassy. He is expected to return to his home in Hong Kong.

ORIGINAL STORY
Australian missionary John Short, 75, was questioned and detained by North Korean authorities on Feb. 16., reportedly after police learned of gospel tracts in his possession.

Short, who has lived in Hong Kong with his wife for the past 50 years, traveled to Pyongyang on Feb. 15 with a tour group, and police questioned him at his hotel the next day about the Korean-language gospel tracts that he was carrying. Officials reportedly asked him who translated the material into Korean, who sent him and to what organization he belongs.

Short’s wife was informed of his detention by a member of the tour group who was allowed to leave on Feb. 18. The tour company has made repeated calls to North Korea, but officials have refused to provide any information.

North Korea is considered the worst persecutor of Christians in the world. Although its constitution provides for freedom of religion, the practice of any non-state-sanctioned religious activity is prohibited. Possessing a Bible, praying to God or Jesus, and meeting with other Christians all are punishable by death.

The Australian government is working on Short’s behalf through its embassy in South Korea and has also requested help from Sweden, which has an embassy in Pyongyang.

Here is one account of a martyr we will meet in heaven, killed under Diocletian’s persecution beginning in 304AD. From Foxe’s Book of Martyrs

Agrape, Chionia, and Irene, three sisters, were seized upon at Thessalonica, when Diocletian’s persecution reached Greece. They were burnt, and received the crown of martyrdom in the flames, March 25, A.D. 304. The governor, finding that he could make no impression on Irene, ordered her to be exposed naked in the streets, which shameful order having been executed, a fire was kindled near the city wall, amidst whose flames her spirit ascended beyond the reach of man’s cruelty.

O, for the day when we are all beyond reach of man’s cruelty, under the shelter of the arms of Jesus! When all children will be translated instantly to a place of safety and love. When the aged and infirm receive their resurrected, glorified bodies and can run and leap in joy toward Jesus and kneel without pain at His feet. When persecution is no longer a word in our vocabulary and it has lost all power to instill fear or cause death. That day is coming, brothers and sisters, it is coming.

I don’t know of any man who would use a chain with a broken link to pull a car out of a ditch. It doesn’t make sense. As soon as one link is destroyed, the entire chain’s integrity is suspect.

Our Holy Spirit said that the scriptures cannot be broken.

“If he called them gods to whom the word of God came—and Scripture cannot be broken—” (John 10:35)

The word broken means also ‘untied’. What a relief! What a joy! We can take hold of the strength of scripture. It has integrity. It is a finely woven tapestry, each thread having meaning and contributing to the entire.

Men have tried breaking them. And they think they have done a good thing. However it is really themselves that they are breaking. Thomas Jefferson was one who broke the scriptures and in so doing revealed to his believing peers and to us in history that it was he himself that was broken. He used a razor and extracted, even in mid-sentence, all the things from the real bible that he didn’t believe. The miracles, anything supernatural, angels, atonement, the Divinity of Jesus, the Trinity, original sin, the Resurrection- all out. Here is a public domain excerpt of the Jefferson book, and you can clearly see the cuts and pastes. Jefferson called it “The Life and Morals of Jesus of Nazareth.” You can see the entire book here at the Smithsonian Museum of Natural History.

“Jefferson’s claim to be a Christian was made in response to those who accused him of being otherwise, due to his unorthodox view of the Bible and conception of Christ. Recognizing his rather unique views, Jefferson stated in a letter (1819) to Ezra Stiles Ely, “You say you are a Calvinist. I am not. I am of a sect by myself, as far as I know.” (source)

Jefferson thought that God was mean to punish the Jews, and that if the bible was right with its doctrines, no one would be fighting over it. In no way can Jefferson be called a brother in the Christian faith, and this is evident in his joy in redacting the portions of scripture which perplexed or convicted him. Jefferson literally and physically made God into his own image. (Acts 17:29-30)

God’s words are eternal! (Luke 21:33). The scriptures cannot be broken. Check yourself. Do you believe it all? Or have you made the God of the bible into your own image? Even a little? If not, then rejoice that we have been given a revelation of the mind of God and as His children, we have been given the mind of Christ so we may understand what He has revealed.

“For who has understood the mind of the Lord so as to instruct him?” But we have the mind of Christ.” (1 Corinthians 2:16)