In a continuing downward progression of record-breaking, unprecedented and impacting weather, the western US is baking in an unusual scorching heat. 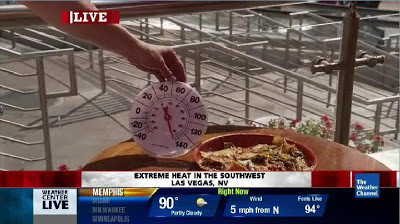 Drudge had the following photo and headline for the main news item on his page: 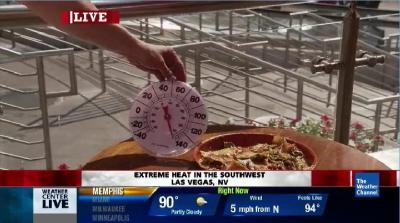 This is the forecast: 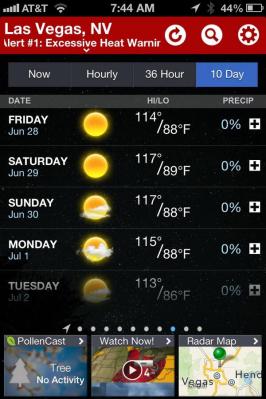 Unfortunately, we have had our first fatality due to this freak heat.

Record-setting heat wave turns fatal in Southwest
“A record-setting heat wave will continue baking the Southwest on Sunday and into the work week.  Already, the hot spell has set records in cities such as Phoenix (119 degrees) and Lancaster, California (111 degrees). Las Vegas tied its record high of 115 degrees Saturday.  Civic and emergency officials throughout the Southwest say if there was ever a time to worry, this would be it. The reason isn’t just the oppressive heat that is plaguing the region: It’s the fact it is expected to hang around, and possibly even get worse, over the next few days. Man helps the homeless survive the heat  The heat may have led to the death of an elderly man in Las Vegas. Paramedics found the man dead in his home, which did not have air conditioning, Las Vegas Fire & Rescue spokesman Tim Szymanski said.”

I’m always hesitant to assign a particular event to God’s judgment. I don’t like saying “The freak heat is because of America’s stance on homosexuality”, because I don’t know the mind of God. However, I do know His standards and I do know His past actions because we have the bible. One only has to read the Old & New Testament to understand that God hates sin, and He warns people individually and He warns nations when they are rebelling.

We also know that God is in control of the weather. Earlier this week, when unprecedented hail fell in Singapore, I’d said, “Though satan can be the originator of some weather disasters, (Job 1:9-12, 19), he can only do so at the Lord’s permission. Ultimately, all weather is in the hands of the Creator.”

It is the Lord who sends the scorching east wind to demonstrate to a rebellious Jonah that He is in control:

“When the sun rose, God appointed a scorching east wind, and the sun beat down on the head of Jonah so that he was faint. And he asked that he might die and said, “It is better for me to die than to live.”” (Jonah 4:8).

God uses the scorching wind to accomplish His purposes –

“The LORD will dry up the gulf of the Egyptian sea; with a scorching wind he will sweep his hand over the Euphrates River. He will break it up into seven streams so that anyone can cross over in sandals.” Isaiah 11:15).

We know for sure that the bible says that a prophecy will come about that will involve heat. That prophecy is not being fulfilled now, but I’d like us to please think on this present scorching heat as a shadow-picture of what will come. What will come will be far worse.

“The fourth angel poured out his bowl on the sun, and it was allowed to scorch people with fire. They were scorched by the fierce heat, and they cursed the name of God who had power over these plagues. They did not repent and give him glory.” (Revelation 16:8-9).

Newsman Matt Drudge wrote, “Vegas to hit its highest temp ever recorded this weekend? Drunk/420 tourists failing on blvd will literally be fried.”

Please keep in mind that in this present Age of Grace, the discomforts we experience are a picnic compared to the judgments to come. For today, 120 degree heat will be a memory when the Tribulation comes and heat that soars to 150 degrees or even 180 or 200 happen. It is coming, and that means only two things:

2. “And Jesus came and said to them, “All authority in heaven and on earth has been given to me. Go therefore and make disciples of all nations, baptizing them in the name of the Father and of the Son and of the Holy Spirit, 20teaching them to observe all that I have commanded you. And behold, I am with you always, to the end of the age.” (Matthew 28:18-20)

That was the tweet from a Christian sister who lives in Oklahoma. Wildfires have struck that state the last few days and there is much damage.

We’re scorched from one end of the nation to the other. We are experiencing heat, drought, fires, ash, dust, dryness and thirst…

Why is this? Because our hearts are hot for satan, we’re drought-ridden from not being in the Word, and our consciences are seared as if with a hot iron. So it is no wonder, my glorious God, that You manifest on the outside what is on the inside of your people. You are the Living Water, but we refuse it. You are the refreshing dew but we don’t want it. You give to us that is athirst the fountain of the water of life freely but we turn away. (Revelation 21:6).

But your people say NO!

“Therefore the heavens above you have withheld the dew, and the earth has withheld its produce.”
(Haggai 1:10)
I will make it a wasteland, neither pruned nor cultivated, and briers and thorns will grow there. I will command the clouds not to rain on it.” (Isaiah 5:6)
“The LORD will turn the rain of your country into dust and powder; it will come down from the skies until you are destroyed.” (Deuteronomy 28:24)
Surely wickedness burns like a fire; it consumes briers and thorns, it sets the forest thickets ablaze, so that it rolls upward in a column of smoke. (Isaiah 9:18)
“My people have committed two sins: They have forsaken me, the spring of living water, and have dug their own cisterns, broken cisterns that cannot hold water. (Jeremiah 2:13). 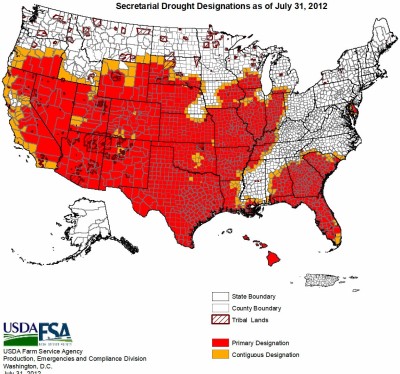 I like to see the metaphors in how the LORD presents Himself to us. One of those ways is as the Living water, refreshing rain, a fountain of truth. Water, water, water. I also like to see His promises. We often focus on the ‘good’ promises, of eternal life, treasure in heaven, unconditional love. But He made other promises too. Like this one that He promises His people the Jews-

“If ye walk in my statutes, and keep my commandments…Then I will give you rain in due season, and the land shall yield her increase.”  (Leviticus 26:3,4)

Although our covenant with Him as the grafted-in Gentiles is not the same as the covenant above, the principles are the same. We are still to walk in His ways and follow His statutes. If we do, then another of His promises will be fulfilled:

“And the LORD will guide you continually and satisfy your desire in scorched places and make your bones strong; and you shall be like a watered garden, like a spring of water, whose waters do not fail.” (Isaiah 58:11).

Barnes’ Notes closes beautifully with an explanation of the Isaiah verse above. Man, those 1800’s writers could write:

“But in the supplies which God makes for his people there is no such deception. The fountains of pardon, peace, and joy are ever open and ever full. The streams of salvation are always flowing. The weary pilgrim may go there at any season of the year, and from any part of a desolate world, and find them always full, refreshing, and free. However far may be the pilgrimage to them from amidst the waste and burning climes of sin, however many come to slake their thirst, and however frequently they come, they find them always the same. They never fail; and they will continue to flow on to the end of time.”