ISIS, also known as Islamic State, publishes a glossy, slick magazine each month called Dabiq. It is propaganda, of course, but it is a nice production. In this month’s issue, the Islamic State threatened to conquer Rome and break the Vatican’s crosses.

Dabiq is a place in Syria that is supposed to be the location for one of the final battles according to certain Muslim myths about a final apocalypse. Choosing such a name for the magazine highlights the Caliphate’s goals.

In their eschatology, Sunni Muslims believe they must ignite a holy war to prove to Muhammad that they are serious about worshiping Allah and serious in seeking for Muhammad to return in ‘the last hour.’

The magazine is full of exhortations from “Allah”. They call westerners who are opposed to them “Crusaders”, whether they are military or Christian. Here is one example of their latest rhetoric:

This certainty was echoed by Shaykh Abū Muham – mad al-’Adnānī (hafidhahullāh) in his last speech when he said, “And so we promise you [O crusaders] by Allah’s permission that this campaign will be your final campaign. It will be broken and defeated, just as all your previous campaigns were broken and defeated, except that this time we will raid you thereafter, and you will never raid us. We will conquer your Rome, break your crosses, and enslave your women, by the permission of Allah, the Exalted. This is His promise to us; He is glorified and He does not fail in His promise. If we do not reach that time, then our children and grandchildren will reach it, and they will sell your sons as slaves at the slave market” [Indeed Your Lord Is Ever Watchful].

In other sections, the authors of the magazine reiterate that after conquering the Vatican they will sell all the women they capture into slavery. The magazine is full of articles with titles like “The Revival of Slavery: Before the Hour”, and “In the Words of the Enemy” (US Secretary of Defense Chuck Hagel) and gruesome pictures of beheaded people and the slain ‘Crusaders’.

The cover photo of the current issue (October 2014) is of an image of the Vatican with a photoshopped ISIS flag atop the Vatican obelisk. 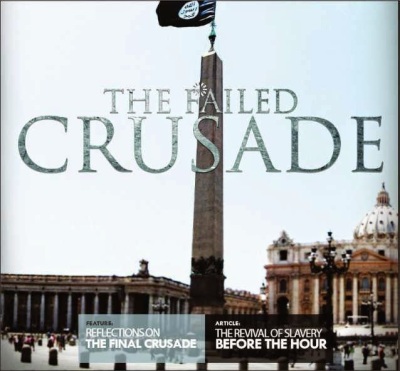 In May 2014, Pope Francis met with Grand Mufti of Jerusalem, Muhammad Hussein, and pointed to the fraternal dialogue and exchange between Christians and Muslims, this quote is from Vatican Radio Archives:

Dear brothers, dear friends, from this holy place I make a heartfelt plea to all people and to all communities who look to Abraham: may we respect and love one another as brothers and sisters! May we learn to understand the sufferings of others! May no one abuse the name of God through violence! May we work together for justice and peace! Salaam!

“May no one use religion as a pretext for actions against human dignity and against the fundamental rights of every man and woman, above all to the right to life and the right of everyone to religious freedom,” he said. … Islamic State has declared a “caliphate” in the territories they control and have killed or driven out large numbers of Christians, Shi’ite Muslims and others who do not subscribe to their hardline version of Sunni Islam.

The acts of ISIL ARE Islam. They are the religious center, the non-violent Muslims are the extremists. Needless to say, the Pope’s entreaties are going ignored.

Islam is not a religion of peace. But God is using it to bring about His final peace, the Prince of Peace who will rule with a rod of iron, and minister justice to all the nations. He warned the ancient Ninevites (present day ISIL) against their unceasing evil, saying through Prophet Nahum,

An oracle concerning Nineveh. The book of the vision of Nahum of Elkosh.  God’s Wrath Against Nineveh  2The Lord is a jealous and avenging God; the Lord is avenging and wrathful; the Lord takes vengeance on his adversaries and keeps wrath for his enemies. 3The Lord is slow to anger and great in power, and the Lord will by no means clear the guilty. (Nahum 1:1-3)

As long as a Muslim is praying to Allah, he has forsaken the only steadfast love there is. (Jonah 2:8). But as long as a Muslim draws breath, even one involved in an unholy war as the ISIS men are, he will receive mercy if he repents. (1 John 1:19).

Jerusalem Post: ISIS threatens to conquer the Vatican, ‘break the crosses of the infidels’

The Clarion Project: lists of current and former Dabiq issues 1,2,3 &4, with synopsis of each issue’s main themes. In English

I have not followed the Bowe Bergdahl issue. I know little about it. Bowe Bergdahl is America’s only known prisoner of war. Apparently Obama secured this detained and ailing soldier’s release by swapping five Taliban detainees — and leaving most of Congress in the dark. As Congress has become more upset at the President’s sudden and unilateral action, it appears as the story unravels, that the soldier may or may not actually be a deserter- not a hero.

I don’t follow the ins and outs of politics anymore. I have limited time and limited emotional capacity, so I try not to fill it with incidental things of life. I stay focused on work, my local church, the people I interact with, and studying the bible, prayer, and writing, etc.

I have to admit also that my distaste for our current occupant of the Oval Office aids me in keeping me from looking too closely at our American machinations at home and abroad.

However, something on Allen West’s website came to my attention. When Obama held a press conference with the soldier’s father, Bob, and the father was speaking, the father spoke in Arabic. They were just a few words, but there you go. Allah was one of the words. Here is former Congressman and Lt. Colonel Allen West’s report of the incident.

First words of Bergdahl’s father at White House were Arabic
Clare Lopez is a former CIA operations officer, a strategic policy and intelligence expert with a focus on Middle East, national defense, WMD, and counterterrorism issues, and a friend of mine. She emailed me this morning a very poignant analysis that only someone knowing language and Islam could ascertain. She wrote:

“What none of these media is reporting is that the father’s (SGT Bowe Bergdahl’s father Bob) first words at the WH were in Arabic – those words were “bism allah alrahman alraheem” – which means “in the name of Allah the most gracious and most merciful” – these are the opening words of every chapter of the Qur’an except one (the chapter of the sword – the 9th) – by uttering these words on the grounds of the WH, Bergdahl (the father) sanctified the WH and claimed it for Islam. There is no question but POTUS knows this.”

Folks, there is a lot to this whole episode — like Benghazi — that we may never know. And this is not conspiracy theory, it is truth based upon Arabic and Islamic dogma and tradition. And here’s the video if you have any questions.

We Americans have been blessed. For the most part we have had leaders who have willing hearts, attitudes of service, and a desire to do the best for our nation and their fellow citizens. Oh, sure, we’ve had bumblers (Jimmy Carter) some bad ones (James Buchanan), some whose personality did not fit the demands of the job (Ricard Nixon), but overall we never had an inkling that the man whom fellow citizens had elected to office was actually an enemy working against them and did not care at all about their best interests. 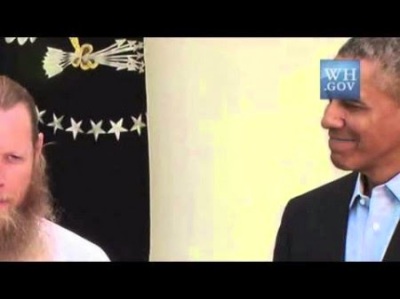 In my opinion, he is a traitor, working actively with satan to dismantle our nation. And that makes me sad, because I love this nation. I mourn for the soldiers who must perform under such a Commander in Chief. I feel empathy for the impoverished ones, the fatherless and the widows in this climate of coldness and rising crime and chaos.

I have felt this way for 7 years. But so what? In looking at nations since the first nations formed in Genesis, 7 years of living under a man who isn’t working for Jesus and isn’t even working for the best interests of the citizens is a tiny, microscopic mite in the historical scheme of things. What about Pharaoh, who let his own people die out of pride? What about invading armies into Israel, killing children? What about Herod and the Massacre of the Innocents? Nero?

What about Germany’s historical shame of Hitler, someone they elected? What about every dictator who ever lived; Pol Pot, Idi Amin, Manuel Noriega, Genghis Khan… Actually, monarchies and dictatorships have been the historical norm for governments. And given man’s depraved state, it is only natural that sinful men do sinful things, and even ‘good’ dictators turn bad.

“First of all, then, I urge that supplications, prayers, intercessions, and thanksgivings be made for all people, for kings and all who are in high positions, that we may lead a peaceful and quiet life, godly and dignified in every way. This is good, and it is pleasing in the sight of God our Savior, who desires all people to be saved and to come to the knowledge of the truth.”

We should not get all tangled up and angry when sinful people do what they normally do: sin. This goes for even our leaders, whom sometimes we set apart as somehow higher, more noble, less sinful. But the lost are just that, lost. A lost man smiles when another prays to a false god. A lost man smiles when his plans for evil seem to be coming true. But God means all evil for good to those who love Him. (Genesis 50:20, Romans 8:28). It is by God’s grace that we even know that He means it for good, having the Holy Spirit in us to illuminate the bible’s meaning to us in the verses which declare it so.

As for Obama, all our leaders, any leader, or every sinful person, “Their foot shall slide in due time.” (Deuteronomy 32:35). Obama can smile triumphantly all he wants, but the only triumphant smile I will give is the one if in the Lord’s purpose and plan, He calls Obama to salvation. I once was a sinner like the president, smiling when false gods were mentioned. If he is saved, we will be brothers in grace. THAT calls for a smile of triumph.