I love biblical art, and I’m entranced with a few particular pieces. One I come back to a lot happens at Christmas time, and I love to look at it. I’ve written about it before, here, in December 2015, and here, in December 2017. It is called The Nativity, by Gari Melchers. 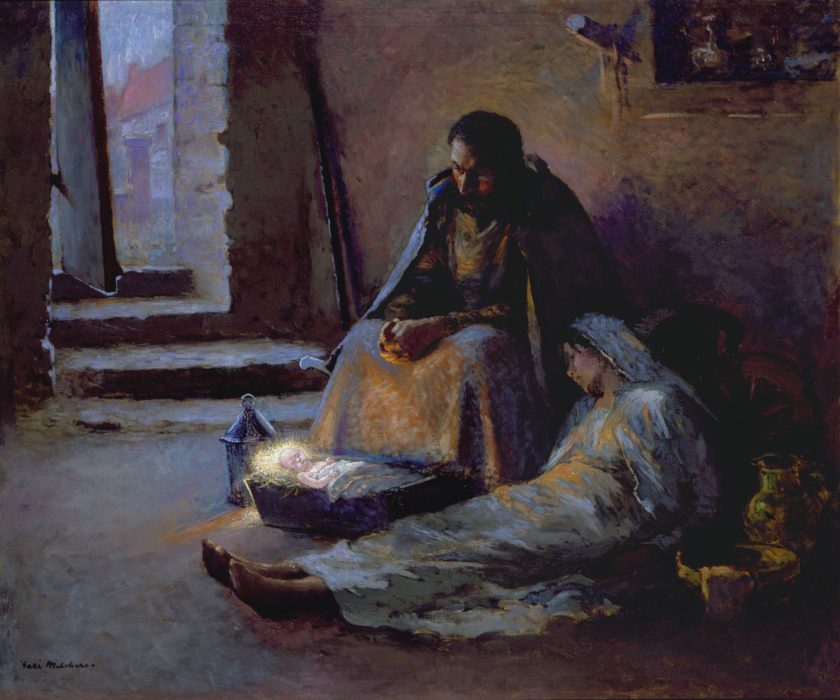 When preaching about this moment in history, Pastor S. Lewis Johnson emphasized the virgin conception rather than the virgin birth. He preached that the birth was typical, human, bloody, and messy. It was the conception that was immaculate. The art by American painter Gari Melchers depicts a scene more reflective of a birth than most nativity scenes usually do.

Here, we see a deeply concentrating Joseph gazing at his newborn son, perhaps pondering the spiritual implications of this new life that promised to bring new life to one and all. Note his furrowed brow. Mary, exhausted, drooping, leans against her husband sleepily, a recently used washbowl and cloth by her side. Is the glow from the Babe’s head, or the lantern that has been set next to Him? The scene depicts exhaustion, wonder, light, and hope.

Julius Garibaldi Melchers (1860-1932) was an American artist. He was one of the leading American proponents of naturalism. He won a 1932 Gold medal from the American Academy of Arts and Letters, according to Wikipedia.

As for the setting itself, it is unusual in that it does not show the usual display of a barn or stable, with animals around. Certainly the Wise Men from the East were not present. Historically we know that appeared up to two years later, when Mary and Joseph were living in a house and the babe was a toddler. This is another reason I’ve always liked this painting, above all others. It is more closely historical and accurate than many people know in setting the scene in the animal section of a house.

It was highly likely, almost certain, that Mary gave birth in a house. Perhaps the house was crowded with other relatives who’d arrived for the census prior to their arrival, so the only spot left was the downstairs entry where the animals were usually kept. Here is information about the likelihood that Jesus was not born in a barn or stable, but in a home, and probably a relative’s domicile. The essay also discusses what is meant by “inn”, and more.

Once More, Jesus was Not Born in a Stable

The mention of a ‘manger’ in Luke’s nativity story, suggesting animals, led mediaeval illustrators to depict the ox and the ass recognising the baby Jesus, so the natural setting was a stable—after all, isn’t that where animals are kept? (Answer: not necessarily!)

The third issue relates to our understanding of (you guessed it) the historical and social context of the story. In the first place, it would be unthinkable that Joseph, returning to his place of ancestral origins, would not have been received by family members, even if they were not close relatives.

Thanks be to God for his inexpressible gift! (2 Corinthians 9:15)