If you read the news today it seems like everything is out of control. I mean, really.

I think every sphere in which we live; food, transportation, government, war, medicine, peace, etc. seems like it’s going wonky. Does it seem like every sphere of our lives are unraveling, undergoing pressure, or otherwise getting worse? It sure feels like things are spinning out of control.

I was musing on God’s orderliness. Time and time again in the Bible He shows us just how much He is in control. Everything happens in His schedule, in His timetable, in His timing, for His reasons. Nothing escapes His notice. Nothing happens unless He causes it, allows it, or oversees it and then brings it all to the Good for those who love Him.

You have to read the Bible a lot to get this broad of an overview and this much of a grounding. I can put in Bible verse after bible verse, but it wouldn’t broaden the scope enough to illustrate what I’m saying. The best thing to do is read Matthew 1-3. I’ll synopsize here.

When the Magi arrived, Herod was troubled, and all Jerusalem with him. (Mt 2:3). So Herod called the priests and teachers and asked about this birth and where it was supposed to take place. They replied:

So they said to him, “In Bethlehem of Judea, for thus it is written by the prophet: ‘But you, Bethlehem, in the land of Judah, Are not the least among the rulers of Judah; For out of you shall come a Ruler Who will shepherd My people Israel.‘” (Matthew 2:5-6)

Jesus was born in Bethlehem, just as He planned. Orderly.

Herod was much troubled and he decided to kill the boy Jesus, this coming King he had heard of, by killing all the tots under the age of two. But God sent an angel to Joseph, advising him to flee to Egypt. And so another prophecy was fulfilled.

“When he arose, he took the young Child and His mother by night and departed for Egypt, and was there until the death of Herod, that it might be fulfilled which was spoken by the Lord through the prophet, saying, “Out of Egypt I called My Son.” (Matthew 3:14-15)

Herod’s massacre then happened, and so the prophecy of Jeremiah was fulfilled–

“A voice was heard in Ramah, Lamentation, weeping, and great mourning, Rachel weeping for her children, Refusing to be comforted, Because they are no more.” (Matthew 3:18).

God sent the People their first prophet in 400 years, a man to announce the coming kingdom and to call for repentance: John the Baptist. This was to fulfill he “who was spoken of by the prophet Isaiah, saying:

“The voice of one crying in the wilderness: ‘Prepare the way of the LORD; Make His paths straight.'” (Matthew 3:3).

Orderly. He was spoken of to come, and he came.

As an example, you look at this Reubens painting it looks like chaos. 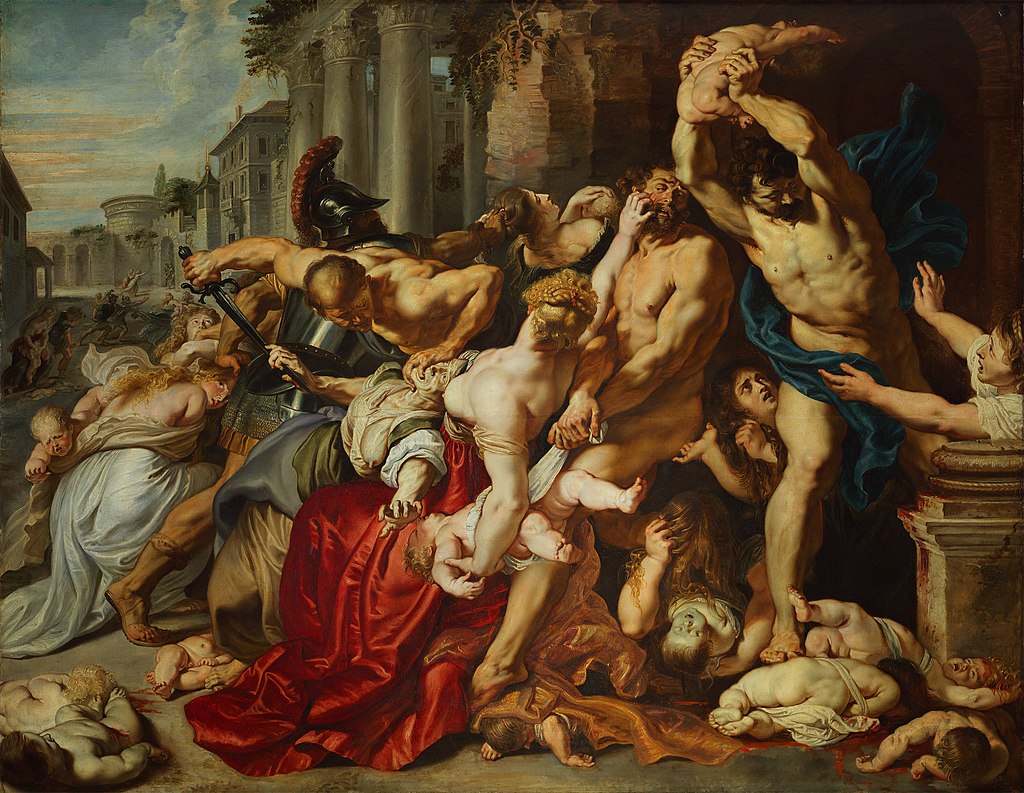 The mothers of the slain babies sure didn’t feel like life was orderly- it felt like it was spinning out of control. As the angel shook Joseph’s shoulder and told him to flee to Egypt, it sure must have felt like things were spinning out of control. You know how you feel when you get a 2 am phone call! It is scary at best and chaotic at worst, especially if the call brings bad news, especially if you have to run out to the police station or to the hospital.

I understand how the people of Jesus’ day would be confused, the disparate verses calling for a Bethlehem-born, lamenting Rachel, out of Egypt, Nazarene presaged by a Nazrite eating locusts and honey didn’t seem to fit together. But then, just as suddenly, they did. His prophecy is perfect and perfectly orderly.

If you feel like life is getting out of control, I understand. There’s high crime, wantonness, bloated lusts. But they too are prophesied

Tell us, when will these things be? And what will be the sign of Your coming, and of the end of the age?” And Jesus answered and said to them: “Take heed that no one deceives you. For many will come in My name, saying, ‘I am the Christ,’ and will deceive many. And you will hear of wars and rumors of wars. See that you are not troubled; for all these things must come to pass, but the end is not yet. For nation will rise against nation, and kingdom against kingdom. And there will be famines, pestilences, and earthquakes in various places. All these are the beginning of sorrows. (Matthew 24:3b-8).

All these things must come to pass. And then He will call for us, and suddenly everything we have been told for thousands of years in the twinkling of an eye will become past history.

God has everything in control. If you are saved by His grace, your soul is secure. Everything is progressing just as it should be. Nothing is out of control.

Did you know that over 100 prophecies in Daniel 11 alone were fulfilled exactly? Such Godly precision!

It is happening now in an orderly way, precisely, and perfectly. And no matter what occurs in my life, no matter how low my bank account gets, or how many rumors of reduction in force swirl past my ears, no matter how many times I have to hide in the tub with a pillow over my head from tornadoes, no matter how empty my refrigerator gets, I know He has everything in control. That knowledge is the securest place I could possibly be, and I wouldn’t trade it. I am grateful for His grace, His perfection, His plan, His love for keeping me sheltered in this wonderful knowledge.

If you would like to partake of the sweetness of His security, knowing everything is perfect in the world according to His plan, then repent of your sins. Appeal to Jesus as your savior from the wrath of God, and fling yourself on Him in sorrow for your crimes against Him. He will forgive you. And then I would be blessed to say to you, “Welcome to the family of God.”

2 thoughts on “Are things spinning out of control? (Answer: No)”