Here are a couple of sales to alert you to right now. They are too good to pass up.

I love the Puritans. I grew up in Rhode Island, founded by exiled Puritan Roger Williams, and Anne Hutchinson, exiled Puritan woman who founded Portsmouth RI (next to Newport). Our 4th grade field trip was to Plymouth to visit the replica Mayflower, the ship that transported the Puritans to New England in 1620. Some of my friends lived in homes built in the 1600s. Others attended Harvard, founded by Puritans. You couldn’t get away from the Puritan shadow of these mysterious and incredible people (to me, growing up). I have long been interested in them!

Only God knew that He would save me from His wrath and bring me into the faith of these selfsame Puritans, and how great is the grace that He gives me to learn about them with Christ’s mind. And, someday to be with them in glory.

Here are some good, solid resources for you if you’re interested in learning about these particular forefathers and mothers.

The American Puritans, by Perry Miller (Editor). Published in 1956, this book was the standard until interest very recently revived and modern books and anthologies have been published looking at the Puritans again, at long last! (see below). Yet still recommended, it stands the test of time.

Valley of Vision: A Collection of Puritan Prayers and Devotions, Arthur Bennett. One way to get to know the Puritans is to read their collected prayers and devotions, giving insight into their love and fervor for the Lord. They way they thought about Christ, their Christian Life, and others is amazing to read.

The Puritan Paperbacks Series at Banner of Truth includes some of the most classic Puritan works published by the Banner of Truth. These books are selections of larger works from the Puritans, published in small paperbacks to make them more accessible and affordable. Notable titles include The Bruised Reed by Richard Sibbes, The Mortification of Sin by John Owen, and The Rare Jewel of Christian Contentment by Jeremiah Burroughs. Other notable Puritan writers in this series include Thomas Goodwin, Thomas Watson, John Flavel, Richard Baxter, and John Bunyan, et al.

The Pocket Puritan Series is a collection of short, accessible writings from the Puritan, again offered by Banner of Truth. Small enough to fit in your pocket, these books cover topics ranging from sin, to heaven, to growing one’s love for Christ. These are great works of ‘spiritual theology,’ and can go with you as you travel. Some notable titles include a collection of Prayers on the Psalms and selections of the writings of John Flavel, titled None but Jesus.

If you were excited about the documentary Puritan, but sad at the price (I totally understand) then this is the sale for you! The deluxe edition of Puritan: All of Life to the Glory of God, is half off at Ligonier today (I don’t know for how long, it’s part of the Friday Sale). 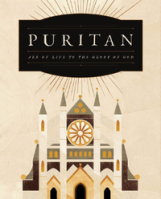 This feature-length documentary (6 DVDs) and hours of accompanying teaching sessions feature several of our Teaching Fellows and other gifted scholars and leaders. The Deluxe Edition includes a special, decorative, exclusive hardback book by Dr. Joel Beeke and Dr. Michael Reeves and the Workbook. The DVDs, Book, and Workbook are offered for $75. That’s less than $10 per item in the bundle.

The Puritan Combo: Puritan Theology and Meet The Puritans is on sale at Reformation Heritage Books! These two hardcovers are bundled to include A Puritan Theology: Doctrine for Life, a systematic theology by Dr. Joel Beeke a professor at Puritan Reformed Theological Seminary; and Meet the Puritans, a collection of mini-biographies and book reviews that also includes helps on which reprinted editions are best. The two together are on sale where you save $58. You can also buy either of them separately on sale too. I bought Meet the Puritans.

The American Puritans by Nate Pickowicz is a new book out by this Gilmanton NH pastor and writer of Why We’re Protestant: An Introduction to the Five Solas of the Reformation, Reviving New England: The Key to Revitalizing Post-Christian America, John Cotton: Patriarch of New England

The super saving sales are at Ligonier’s $5 Friday sale, Reformation Heritage Books. You can also find these items at Banner of Truth Books, and of course Amazon. Enjoy! 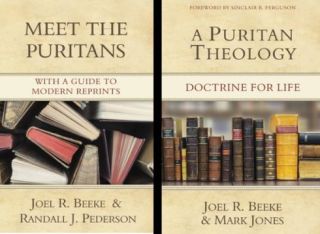