Foxe’s Book of Martyrs. According to this summary from Christian Book Summaries,

Writing in the mid-1500s, John Foxe was living in the midst of intense religious persecution at the hands of the dominant Roman Catholic Church. In graphic detail, he offers accounts of Christians being martyred for their belief in Jesus Christ, describing how God gave them extraordinary courage and stamina to endure unthinkable torture.

From the same link, the book’s purpose was fourfold:

Many people consider Foxe’s Book one of the top three books in the English language, the Bible and Pilgrim’s Progress being the other two. When John Bunyan, author of Pilgrim’s Progress, went to prison, he took with him two books, his Bible and Foxe’s.

Little is known about Mark except what is written in the New Testament about him. After Paul’s mention of him in 2 Timothy 4:11, he disappears from view. Tradition says he was dragged to pieces when he spoke out against a solemn ceremony for their idol Serapis.

The only account we have of the martyrdom of Apostle Peter is from the early Christian writer Hegesippus. His account includes a miraculous appearance by Christ, likely exaggerated. When Peter was old (John 21:18), Nero planned to put him to death. When the disciples heard of this, they begged Peter to flee the city [said to be Rome], which he did. But when he got to the city gate, he saw Christ walking towards him. Peter fell to his knees and said “Lord, where are you going?” Christ answered, “I’ve come to be crucified again.” By this, Peter understood it was his time to suffer the death of Jesus which would glorify God. (John 21:19). So he went back to the city. After being captured and taken to his place of martyrdom, he requested that he be crucified in an upside-down position because he did not consider himself worthy to be crucified in the same position as his Lord.

Below:  Caravaggio: painting of the crucifixion of Apostle Peter 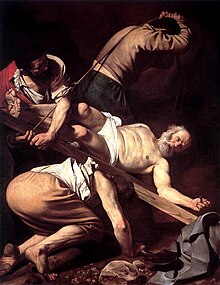 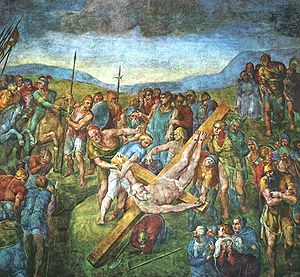 Michaelangelo: fresco of the crucifixion of Apostle Peter

This essay first appeared on The End Time in May, 2013.

One thought on “Sunday Martyr Moment: Mark and Peter”

Nice summer sky tonight
Northern Ecuador, near Otavalo. This is a working ranch we stayed at
"Painted Rocks" at Big Bend National Park, TX. These are Native American carved petroglyphs archaeologists believe to be around 3000 years old
Deconstructed type: The letter Z
Two Gardens: Eden and Gethsemane
Amidst all the changes of this troublous life
Follow The End Time on WordPress.com