The Christmas story and really, the entire Jesus story has held artists’ imaginations captive since the beginning,w hen mosaics of fish and other symbols began to appear in imperial Rome. I love art and I especially love the art rendering different scenes from the Bible. I have few regrets in life, but one regret is that of all the times I visited Europe and looked at the Great Art of the world, the religious art was completely lost on me, since I was not saved. In fact, I looked at them puzzled, briefly, then went my way to see other, what I thought were more interesting art pieces. I wish I could go back and see these now in person again, now that I know Him and His story of life, death, and resurrection.

But I can see them still in my memory, and others in my list which I have not seen I thank the internet for bringing them to me. I hope you enjoy this incarnation story of Jesus from the beginning to the end, showing some of my favorite scenes in art.

This scene of the Annunciation was covered frequently in Renaissance art. But it’s this one from the modern era that I enjoy more. Maybe it’s that Mary is depicted on her bed, a place where we women feel most vulnerable if a stranger appears, and what a stranger, Gabriel, who says ‘Fear not!”

Hands down my favorite Nativity scene. Mary lays back, exhausted, Joseph pondering what child is this, Jesus, the light shining from his head…or is that from the lantern? Rag and water by Mary’s side, dirt, no privacy, the Babe enters the world.

The Florentine painter, architect, and sculptor Giotto (ca. 1267-1337) evolved a revolutionary new style and was the greatest and most influential Italian painter before the Renaissance. The Massacre of the Innocents was one panel of a series of frescoes in the Scrovegni Chapel in Padua Italy. He is considered the bridge between the Byzantine style and the new Renaissance style that included depth, perspective, and vibrancy in emotion and in color. Giotto was an amazing artist, studying his works would be well worth your time. Giotto actually painted this scene 6 years earlier but with no expressions on the faces of the mothers. One feature of the nascent Renaissance style was to include emotion on faces and in pictures. No one knows why Giotto painted this scene twice, but I chose to show this 2nd one because it represents the terrible moment with more nuance, “A voice was heard in Ramah, weeping and loud lamentation, Rachel weeping for her children; she refused to be comforted, because they are no more.” Matthew 2:18.

4. James Tissot, The Presentation of Jesus in the Temple, Brooklyn Museum, 1894

I’m not a huge fan of French Painter Tissot’s style, tightly controlled and precisely rendered. He lived at the time of the Impressionists and was friends with some, but refused to join them. He was close to Whistler and also Degas, but maintained a romantic view of Paris fashions and doings, frequently painting fashionable ladies going about their leisure. He was also known for his religious art and it is this one, with what I presume to be Anna exuberantly proclaiming the arrival of the Savior as Simeon pronounces his prophecy to an astonished Mary & Joseph. You see Joseph holding the caged pigeons he is about to sacrifice. 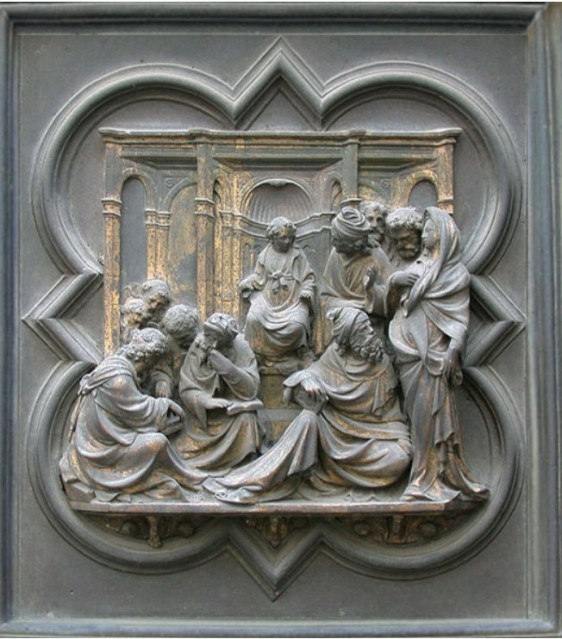 I saw these. I remember the depth and detail and was amazed by the work. This is a small panel of sculpted metal, but look, just look at the faces and the movements and the depth! I vividly remember the Ghiberti panel of Abraham sacrificing Isaac, and wondering why God would tell a father to slay his son. Ten years later, I knew. Here is a Khan Academy 5 minute video describing the competition for the doors and describing Ghiberti’s rendering of the Abraham scene. 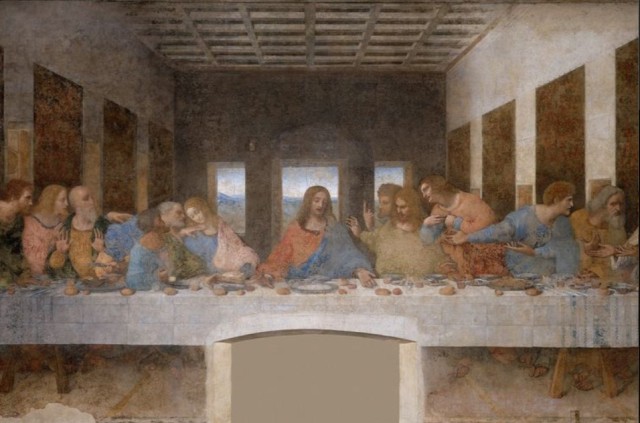 I saw this one too. It was covered by scaffolding and undergoing restoration. At the time I saw it the piece was dark. Now its original colors have been restored and it is a scene of amazing beauty. At the time its expressions and angst was considered almost pornographic they were so vivid, and the scene was not well received. In the 19th century a manuscript was found that stated which apostle was which.

I love, love, love this. Dali painted the cross in four dimensions, perhaps to signify our inability to comprehend Jesus and/or this moment, or perhaps to evoke the verse from Ephesians 3:18 which speaks of Jesus’ love in 4 dimensions (may have strength to comprehend with all the saints what is the breadth and length and height and depth). Here is a BBC article titled The Painter who Painted the Fourth Dimension. I also wrote about it here.

“A translation in paint of Michelangelo’s late sculptured group of the Pietà in Florence Cathedral, at the time in Rome. The pattern and the feeling are the same. The figures of the Dead Christ, His Mother, Saint Mary Magdalene and Joseph of Arimathea make one compact group”- Source

I liked it for the grief on Mary’s face and the three crosses. Also the clouds. LOL, I never said I was a sophisticated art critic. 🙂 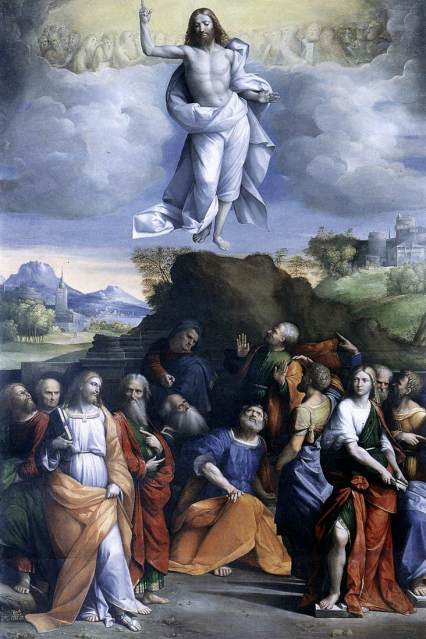 I loved that the disciples watch Jesus rise, and heaven eagerly anticipates his arrival. Jesus points to his home, or to His Father. One of my very favorite verses is Acts 1:11, And while they were gazing into heaven as he went, behold, two men stood by them in white robes, 11 and said, “Men of Galilee, why do you stand looking into heaven? This Jesus, who was taken up from you into heaven, will come in the same way as you saw him go into heaven.”

And the city has no need of sun or moon to shine on it, for the glory of God gives it light, and its lamp is the Lamb, Rev 21:23.

This is what awaits us. We will see Him, not as a babe, but in full glory and power. What a day that will be!

One thought on “Jesus’ life, death, resurrection in art”

Nice summer sky tonight
Northern Ecuador, near Otavalo. This is a working ranch we stayed at
"Painted Rocks" at Big Bend National Park, TX. These are Native American carved petroglyphs archaeologists believe to be around 3000 years old
Deconstructed type: The letter Z
Two Gardens: Eden and Gethsemane
Amidst all the changes of this troublous life
Follow The End Time on WordPress.com