Tony Reinke’s last chapters of Competing Spectacles so moved me I designed this picture to stare at and better ponder its truths. The mental picture of it was so vivid before my eyes I had to draw it out.

Initially I drew just the wavy line and the cross. The cross is lifted up, the sole item on the bloody landscape. To view it, all eyes must look UP. The cross of Christ is the only thing has any meaning in the world. When I was an unsaved person I rejected this notion immediately. As a saved person, by the grace of God, I am humbled to kneel and stare at this wonderful, terrible cross.

The line represents not only the hill, for the Son of Man must be lifted up, and it was a hill He died on and a hill he will return to.

The line is also the dividing line of all human history. The above and below, the hell and the heaven, the line that divides before Christ’s birth and after Christ’s incarnation and is both the starting point and the ending point of all that is and all that will be.

“Christ’s victory is the spectacle that holds the attention of the universe.” ~Tony Reinke, Competing Spectacles 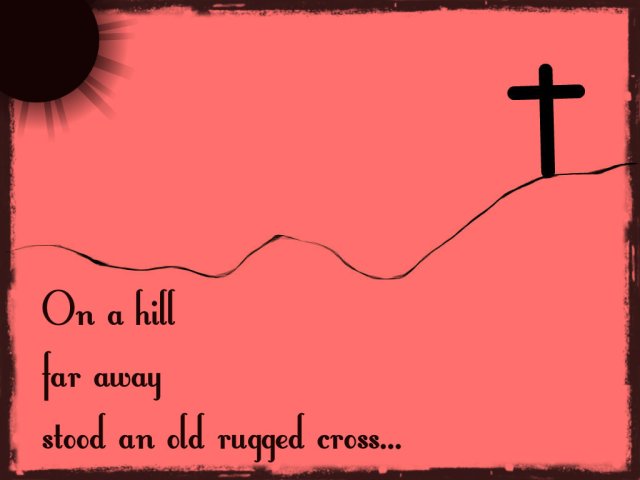 Christ’s glory is the spectacle of all spectacles, and its power is most clearly seen in how it equips and motivates and animates our faithful obedience in all other areas of life.

Christ was not merely made a spectacle on the cross, the cross became a shorthand reference for everything glorious about Christ- His work as creator and sustainer of all things, his incarnation, his life, his words, his obedience, his miracles, his shunning, his beatings, his crucifixion, his wrath bearing, his resurrection from the grave, his heavenly ascension, his kingly coronation, and his eternal priesthood- all of his glory subsumed into his heavenly spectacle. ~Tony Reinke, Competing Spectacles

To be able to love Jesus and not hate Him any longer is the joy of my life.