We’ve all had to deal with bitter and negative people. Even when the nicest thing happens, these people turn it into a gloomy object of sadness, or exhibit a woe is me attitude. Such a woman was Naomi in the book of Ruth. Naomi was Ruth’s mother-in-law, which sometimes complicates matters, as every daughter-in-law knows, lol.

When famine came to the Bethlehemite family of Elimelech and Naomi and sons Mahlon and Chilion, they decided to sojourn to Moab, where conditions were better. Sadly the verses in Deuteronomy 7:3; 23:3 forbid the Israelites from associating with the idolatrous Moabites, but the family went anyway. Settling down, the sons intermarried. In due time, the sons died, as well as Naomi’s husband. Three widows fending for themselves…the outlook didn’t seem good.

So Naomi decided to return to her former hometown, now that the famine had passed. She urged the daughters-in-law to remain in Moab with their own people. Orpah did, but Ruth’s devotion to her dead husband’s mother was solid. In good conscience, could a family member let an aged woman travel alone, facing uncertainty upon her arrival, even if it was her hometown? Decades had passed. Who knew what awaited Naomi.

No, Ruth made her famous statement, ‘where you go, I will go, your people will be my people, your God will be my God’. Such loyalty and devotion Ruth had! Ruth could have cut ties at that point, rationalizing that bitter and negative Naomi should be left to her own devices. But Ruth’s character overlooked it, and by God’s grace, she loved Naomi all the more…

While in Bethlehem, Ruth was gleaning in Boaz’s field. When the two met, Ruth-

fell on her face, bowing to the ground, and said to him, “Why have I found favor in your eyes, that you should take notice of me, since I am a foreigner?” But Boaz answered her, “All that you have done for your mother-in-law since the death of your husband has been fully told to me, and how you left your father and mother and your native land and came to a people that you did not know before. (Ruth 2:10-11).

Ruth was humble upon meeting Boaz. She flung herself to the ground, in deference to him as landowner of the field from which she was gleaning, and in acknowledgement of her alien status.

Throughout her life, Ruth demonstrated loyalty and humility. She displayed diligence (“She came into the field and has remained here from morning till now, except for a short rest in the shelter.” Ruth 2:6b).

When speaking to Boaz, Ruth was gracious – “May I continue to find favor in your eyes, my lord,” she said. “You have put me at ease by speaking kindly to your servant—though I do not have the standing of one of your servants.” (Ruth 2:13).

Let’s go back to Boaz’s statement, “Fully reported to me.” Ladies, what we do and who we are can’t be hidden. We saw major glimpses of Ruth’s character before she arrived in Bethlehem, and since arriving, her character shone all the more. Ruth was known as a good woman. People knew this because they were watching. Our character is noted and reported, whether we like it or not.

The deeds of Ruth were an extension of what was already inside of her. It was the bundle of different positive qualities in her that made the reports and observations of her deeds so Godly.

When my deeds have been fully reported to friends, church members, my family, or my employers, will that report be good, or bad? Will the characteristics the Spirit desires to grow in me be evident? Is the fruit evident? I hope so. I pray so.

How about you? As your deeds are fully reported to others, what would the report say?

In the end, there is one full report that none of us will escape. On the Day of the Lord, the books will be opened, and we will account for what we said and did post-salvation. (Romans 14:10–12; 2 Corinthians 5:10). Though it is not a judgment for us believers, it’s a reward ceremony, still, we will be called to account. The full report will be there, laying before the King and before His subject, each one of us in turn. Are we mindful each day that what we do on earth reflects on His Great Name? We will discover to what extent, when we get there. 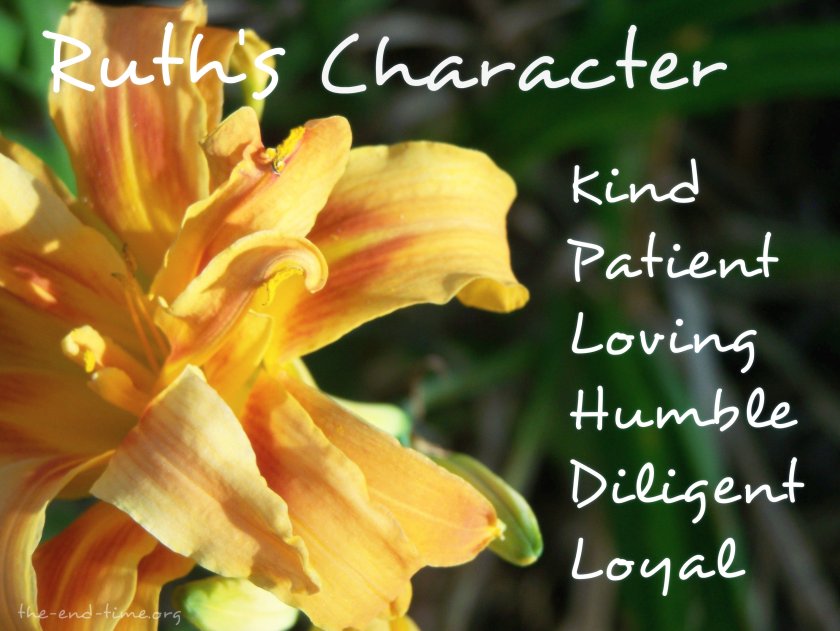 Trivia: Did you know that Oprah Winfrey’s name on her birth certificate is Orpah? However when people pronounced it, it was constantly spoken as Oprah, so that is the name that stuck.

Best Book Series: Nate Pickowitz on why Ruth is the Best Book in the Bible (one in a series of 66, also, this link is to the cached version, the live version has gone dead).

Overview of the Book of Ruth: John MacArthur’s overview and introduction