5As soon as the ark of the covenant of the LORD came into the camp, all Israel gave a mighty shout, so that the earth resounded. 6And when the Philistines heard the noise of the shouting, they said, “What does this great shouting in the camp of the Hebrews mean?” And when they learned that the ark of the LORD had come to the camp, 7the Philistines were afraid, for they said, “A god has come into the camp.” And they said, “Woe to us! For nothing like this has happened before. 8Woe to us! Who can deliver us from the power of these mighty gods? These are the gods who struck the Egyptians with every sort of plague in the wilderness. 9Take courage, and be men, O Philistines, lest you become slaves to the Hebrews as they have been to you; be men and fight.”

10So the Philistines fought, and Israel was defeated, and they fled, every man to his home. And there was a very great slaughter, for thirty thousand foot soldiers of Israel fell. 11And the ark of God was captured, and the two sons of Eli, Hophni and Phinehas, died.

So many of the things…

Hindsight is golden, isn’t it?

In verse 3a, we see that the Israelites are aware that it is the LORD who gives them the victory in any particular battle. So they are aware of the LORD and His power and His presence. That’s good.

But then they show their misguidedness in verse 3B. The defeat of their army was a sure sign that the LORD was displeased. They acknowledged the LORD’S power, but then went on a misconceived plan of action. They did not consult the LORD. They embarked on a course absent His will.

1 Samuel is a record of an actual event, with real people in a real place, in a past actual time. Picture the hills and the camp all around. Picture the Israelites in their gear going to and fro in hastened activity. Picture their confidence and their purposefulness as they decide to bring the ark. Picture the men being selected to go up to Shiloh, and then came back down in a great burst of energy, carrying the ark. The ark arrived in camp and all the preparations had been made ready. As it was settled to its place, there was a great shout from the Israelites.

Their feeling was, ‘NOW we have the ark! NOW we will be victorious! We are doing the right thing!’

How often is it that we see some kind of massive Christian event going on, just like this one depicted in 1 Samuel? IHOP OneThing. An Angus Buchan Mighty Men event. The Send. Benny Hinn Holy Spirit Miracle Healing Service.

The Israelites in 1 Samuel had made two fatal errors. These are the same errors that we see today in the large-scale events of the wrong-headed.

1. They failed to consult God before embarking on their plan to go to war. They acknowledged God, but then did not consult Him. Classic example of Proverbs 14:12,

There is a way that seems right to a man, but its end is the way to death.

In those days there was no king in Israel. Everyone did what was right in his own eyes. (Judges 21:25).

2. They substituted the power of God from God for a talisman, good luck charm in the form of the ark. The ark itself had no power. God had made a conditional covenant with the people of Israel through Moses. It was an if-then promise. If you do this, then that will happen. If you do not do this, then that will happen. As a sign of this promise, He told the Israelites to make a box according to His design and in it was placed the ten commandments. The ark was a sign. When you’re traveling on the highway and you see “Welcome to Maine” it’s announcing something, but the sign is not the state of Maine. That’s something else entirely. There is a vast difference between the sign of God and Gd Himself.

Today we see a focus on seeking signs. When they allegedly manifest, the sign is worshiped. Today’s people (many of them) have substituted the sign for the reality. 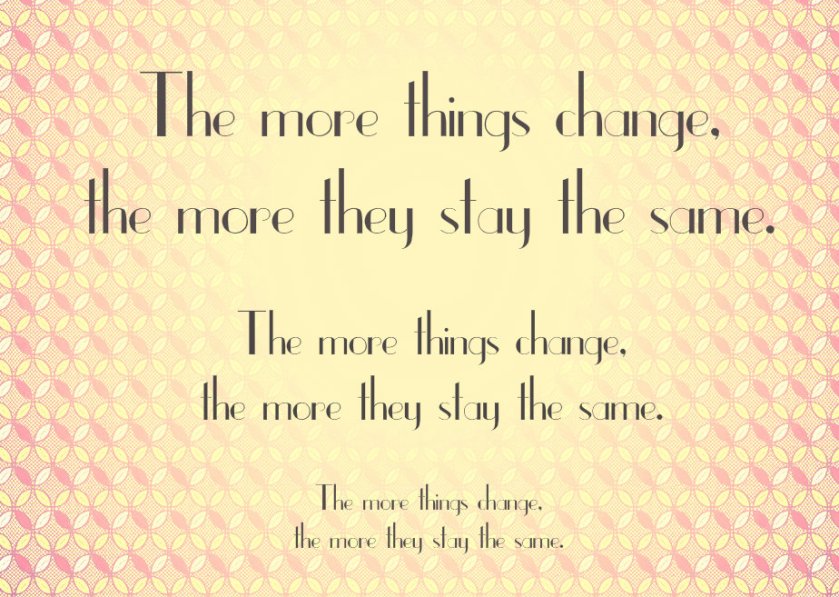 One thought on ““The more things change, the more they stay the same””