A new discovery in the mountains of northern Israel has caused significant excitement for geologists around the world. While working in the Zevulun Valley, close to Mount Carmel, Israeli mining company Shefa Yamim found a new mineral never before discovered on earth.

The International Mineralogical Association regularly approves new minerals for its official list, with up to 100 new substances added to the register each year. However, this latest discovery was hailed as a significant event, as it was previously believed that this type of mineral was only found on extraterrestrial material.

The article continues with a layman’s understandable explanation as to why this discovery generated so much excitement. For believers reading the article, just ignore the secular geological explanation of how this gem came to be formed, lol.

Forbes has a more technical explanation of the gem’s composition.

There are currently over 5,500 known minerals on Earth, with around 100 new minerals being added to the list each year. Most are quite unspectacular in appearance, with crystals too small to be used in jewelry or too rare to be of any economic interest.
Last week, the International Mineralogical Association recognized carmeltazite as a new, distinct mineral. The mineral was named after Mount Carmel where it was found and the elements it contains – Titanium, Aluminum and Zirconium.

The gem, according to the first article above, was “found embedded in cracks within sapphire, the second hardest mineral (after diamonds) found to occur naturally on earth. Carmeltazite closely resembles sapphire and ruby in its chemical composition, and is found in black, blue-green, or orange-brown colors, with a metallic hue.”

This article was published in December, also interesting: 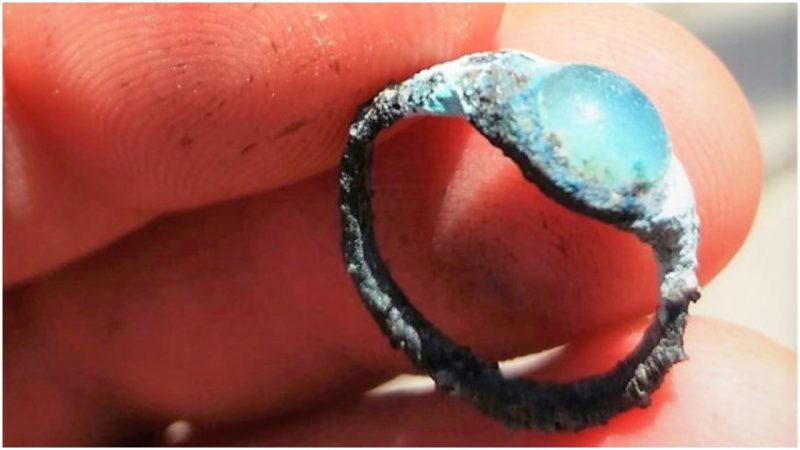 Archaeologists have unearthed a 2,000-year-old bronze ring with a solitaire gemstone in what could be a former ritual bath, or mikveh, in the City of David National Park in Jerusalem.
A Jewish penitent might have misplaced the ring after undergoing a ritual purification and before he embarked on a 2,000-foot climb toward the Temple Mount. “The ring was found by Israel Antiquities Authority archaeologists in what appears to be an ancient mikvah (Jewish ritual bath) on the Pilgrimage Road, which dates back to the time of the second Temple period,” reported the Jewish News Syndicate.

I’ve always been interested in gems. Why? They’re pretty. I used to belong to the Maine Mineralogical & Geological Club. Club motto is: ‘Sharing common interests in minerals, gems, jewelry, geology, paleontology and the related earth sciences and lapidary arts.’ In addition to a major mineral and gem show, and auctions, club meetings and newsletters, the club has secured rights to go onto either private land or mines and are allowed to sift through tailings and do some digs. It’s fun. I’ve found amethyst, garnet, beryl, tourmeline, mica and other pretty gems.

The lapidary process is so interesting. To think, one can dig up a rock, open it, find amethyst inside, and through cutting and polishing, make the formerly dirty rock shine and sparkle. You can wear it as jewelry or display it in its polished state. The earth yields treasures, even while the ground is cursed.

After the curse it lifted and God remakes heaven and earth, we believers are treated to a sparkling new domicile. Literally, it will sparkle with the glorious gems that God will use as…construction materials! The doors will be pearl, the foundations will be emerald and agate and jasper… and so on.

What we believed to be such a precious commodity on earth, gems and jewels, will be simply materials to walk on or sit on. I used this example in a recent essay but I’ll use it again.

I once heard a story that was intended to express how heaven’s riches are beyond measure. It was a story about a rich man who was near death. He grieved because he had worked so hard and wanted to carry his riches with him.

The rich man pleaded with God and was allowed by God to bring one bag. Overjoyed, he loaded his suitcase full of gold bars. Upon arrival at heaven, he was checking in and was told by Peter the bag would not be allowed. He insisted that he had permission. Things were checked on, and it was found that he did have approval from God. When the bag was opened to see what was so needed by the man, Peter exclaimed, “You brought pavement?!”

We laugh at this, because it immediately shows us the different perspective and the priority of heaven. The sparkling jewels we so enjoyed on earth, the diamonds we sought for our engagement rings, the excitement of a new gem recently discovered, all mean nothing in heaven.

Because in heaven the surpassing jewel will be Jesus. EVERYTHING ELSE fades compared to Him. Remember the pronouncement Jesus made about love and hate?

If anyone comes to me and does not hate his own father and mother and wife and children and brothers and sisters, yes, and even his own life, he cannot be my disciple. (Luke 14:26)

No, Jesus wasn’t actually saying to hate one’s parents, that would violate the Fifth Commandment to honor they parents (Deuteronomy 5:16, Exodus 20:12). He was making the statement that one must love Jesus so much that by comparison the love we have for our parents seems like hate, it’s so far on the other end of the scale.

It’s the same with beauty. What we consider beautiful here, will pale in comparison and seem paltry next to the Great I AM in the flesh. His surpassing beauty will outshine all else, even the sun. (Revelation 21:23). Sparkling, precious gems here will be a near rubble, used for construction materials in the New Jerusalem.

Well, I can enjoy the gems’ sparkle here on earth, as long as I know what is ahead. Jesus is ahead, just Jesus. He is enough. And yet, He loves us so much he is preparing a place of beauty and adornment for His bride to dwell in. What a future we have!

9Then came one of the seven angels who had the seven bowls full of the seven last plagues and spoke to me, saying, “Come, I will show you the Bride, the wife of the Lamb.” 10And he carried me away in the Spirit to a great, high mountain, and showed me the holy city Jerusalem coming down out of heaven from God, 11having the glory of God, its radiance like a most rare jewel, like a jasper, clear as crystal. 12It had a great, high wall, with twelve gates, and at the gates twelve angels, and on the gates the names of the twelve tribes of the sons of Israel were inscribed— 13on the east three gates, on the north three gates, on the south three gates, and on the west three gates. 14And the wall of the city had twelve foundations, and on them were the twelve names of the twelve apostles of the Lamb.

15And the one who spoke with me had a measuring rod of gold to measure the city and its gates and walls. 16The city lies foursquare, its length the same as its width. And he measured the city with his rod, 12,000 stadia. Its length and width and height are equal. 17He also measured its wall, 144 cubits by human measurement, which is also an angel’s measurement. 18The wall was built of jasper, while the city was pure gold, like clear glass. 19The foundations of the wall of the city were adorned with every kind of jewel. The first was jasper, the second sapphire, the third agate, the fourth emerald, 20the fifth onyx, the sixth carnelian, the seventh chrysolite, the eighth beryl, the ninth topaz, the tenth chrysoprase, the eleventh jacinth, the twelfth amethyst. 21And the twelve gates were twelve pearls, each of the gates made of a single pearl, and the street of the city was pure gold, like transparent glass. (Revelation 21:9-21)

One thought on “New gem discovered in Israel”