Summer time means movie time, but for the discerning Christian that often means spending more time looking for a suitable movie to view than actually getting to settle down and watch one. In my opinion, The Great Gilly Hopkins is an excellent movie for the entire family.

The IMDB synopsis of the movie:

A feisty foster kid’s outrageous scheme to be reunited with her birth mother has unintended consequences in The Great Gilly Hopkins, an entertaining film for the entire family. Gilly Hopkins (Sophie Nélisse) has seen more than her share of foster homes and has outwitted every family she has lived with. In an effort to escape her new foster mother Maime Trotter’s (Kathy Bates) endless loving care, Gilly concocts a plan that she believes will bring her mother running to her rescue. But when the ploy blows up in Gilly’s face it threatens to ruin the only chance she’s ever had to be part of a real family. Based on the award-winning young-adult novel by Katherine Paterson (Bridge to Terabithia) 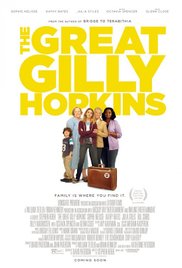 The cast includes Sophie Nélisse as Gilly, in an excellent performance. Her face can carry a series of nuanced emotions that many actors of her age only dream of being able to convey. Also starring are Kathy Bates, Glenn Close, Bill Cobbs, Octavia Spencer, and others you’ll recognize.

I have a huge bias toward kid movies, not just movies for kids like Minions, ToyStory or Monsters Inc, but movies starring kids or about kids. Previously on my link to family-friendly movie reviews I’d reviewed Camp, Raising Izzie, The Blind Side, Walking Across Egypt, The Queen of Katwe, On The Way to School, and others, featuring various childrens’ plights.

Gilly Hopkins is one of the very best of this genre, and with a stellar cast and good production values it lived up to its potential. Gilly has been rejected, marginalized, and shuttled from foster home to foster home, though she has a distant living mother who simply doesn’t want her. This is a fact that Gilly understands deep down but refuses to accept, thus, her repeated attempts to contact and reunite with her mother are sprinkled throughout the film as its thread. In the meantime, Gilly’s barely submerged anger over her maternal rejection rebuffs all who try to get close to her, and Maime’s foster home is threatened to be the last stop before juvie.

Foster mother Bates has one other charge under her care and with the addition of Gilly their placid and loving home life is disrupted immediately. Gilly sneaks, provokes, steals, and eventually lashes out as Bates’ character Maime prays, loves, patiently and tirelessly attempts to show Gilly she has nothing to fear by accepting love.

Glenn Close makes her entrance as Gilly’s Grandmother after recently learning of Gilly’s existence. A custody tussle emerges and presents the vehicle for the climax of the movie.

Other reviewers say that the movie closely follows the book. In order to demonstrate Gilly’s character there are a couple of swear words, rebellion, and some theft, but there is no violence, immodesty, sex, or nudity in this movie. Though Christianity is mentioned, and Maime is seen praying, religion is not a major part of the overt script but patient love as an underlying aspect comes through clearly. It is a good movie for the entire family.