When the Israelites were miraculously delivered from their bondage to the Egyptians, they sang a song of praise. This is known as the Song of Moses. It’s an ode to the one True God, who is all-powerful. The Israelites, led by Moses and Aaron, knew that God was God. They knew who He is.

He is a man of war, who smites enemies. He is a God of wrath,  and power, and salvation. He does wonders that make His people tremble. He is King of Kings, who dismays the kings of the earth. He is mighty. He is to be exalted.

“I will sing to the Lord, for he has triumphed gloriously;
the horse and his rider he has thrown into the sea.
2 The Lord is my strength and my song,
and he has become my salvation;
this is my God, and I will praise him,
my father’s God, and I will exalt him.
3 The Lord is a man of war;
the Lord is his name.
4 “Pharaoh’s chariots and his host he cast into the sea,
and his chosen officers were sunk in the Red Sea.
5 The floods covered them;
they went down into the depths like a stone.
6 Your right hand, O Lord, glorious in power,
your right hand, O Lord, shatters the enemy.
7 In the greatness of your majesty you overthrow your adversaries;
you send out your fury; it consumes them like stubble.
8 At the blast of your nostrils the waters piled up;
the floods stood up in a heap;
the deeps congealed in the heart of the sea.
9 The enemy said, ‘I will pursue, I will overtake,
I will divide the spoil, my desire shall have its fill of them.
I will draw my sword; my hand shall destroy them.’
10 You blew with your wind; the sea covered them;
they sank like lead in the mighty waters.
11 “Who is like you, O Lord, among the gods?
Who is like you, majestic in holiness,
awesome in glorious deeds, doing wonders?
12 You stretched out your right hand;
the earth swallowed them.
13 “You have led in your steadfast love the people whom you have redeemed;
you have guided them by your strength to your holy abode.
14 The peoples have heard; they tremble;
pangs have seized the inhabitants of Philistia.
15 Now are the chiefs of Edom dismayed;
trembling seizes the leaders of Moab;
all the inhabitants of Canaan have melted away.
16 Terror and dread fall upon them;
because of the greatness of your arm, they are still as a stone,
till your people, O Lord, pass by,
till the people pass by whom you have purchased.
17 You will bring them in and plant them on your own mountain,
the place, O Lord, which you have made for your abode,
the sanctuary, O Lord, which your hands have established.
18 The Lord will reign forever and ever.”

You might recall the ten plagues of Egypt that God placed on Pharaoh and his people. They were step-for-step dethronings of the Egyptian gods. God demonstrated He is the One True God with power over all the false gods the Egyptians worshiped. The plagues were also punishment for rebelling against God.

God has promised that after the rapture, when all the earth’s people who rebel against Him, from kings on down to slaves, they will be punished in wrath for their rejection of Him. (Revelation 6:15-16). At that time He will dethrone not only all false gods, but the false god of all time- satan. God will send to people of the earth plagues that are in like kind to the plagues God sent to Egypt. In Exodus, the plagues occurred just to the Egyptians. Even when the sun was darkened, the Israelites had light inside their own homes. (Exodus 10:23). Even when the Egyptian cattle died, the Israelite cattle lived. (Exodus 9:6). God is that precise.

During this post-rapture time of wrath, called The Tribulation (Or The Time of Jacob’s Trouble, Jeremiah 30:7), all the earth will be affected by these plagues. Everyone. During that time many will come to Christ and be saved, but most of the newly saved believers will be martyred. We read in Revelation, that just as the Hebrews sang the song of Moses in praise to God after their deliverance, the martyred will also sing the Song of Moses. We read this in Revelation 15:2-4

And I saw what appeared to be a sea of glass mingled with fire—and also those who had conquered the beast and its image and the number of its name, standing beside the sea of glass with harps of God in their hands. 3 And they sing the song of Moses, the servant of God, and the song of the Lamb, saying,

“Great and amazing are your deeds,
O Lord God the Almighty!
Just and true are your ways,
O King of the nations!
4 Who will not fear, O Lord,
and glorify your name?
For you alone are holy.
All nations will come
and worship you,
for your righteous acts have been revealed.”

Here is a side by side comparison of the plagues of Egypt with the plagues of the tribulation, in both cases, God’s people were delivered from bondage. Click to enlarge. 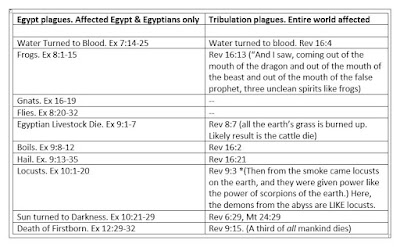 Barnes’ Notes explains the parallels between the two circumstances of the singing of the song of Moses, at the commentary of Revelation 15:3,

Barnes’ Notes on the Bible
And they sing the song of Moses the servant of God – A song of thanksgiving and praise, such as Moses taught the Hebrew people to sing after their deliverance from Egyptian bondage. See Exodus 15. The meaning here is, not that they would sing that identical song, but that, as Moses taught the people to celebrate their deliverance with an appropriate hymn of praise, the redeemed would celebrate their delivery and redemption in a similar manner. There is an obvious propriety here in referring to the “song of Moses,” because the circumstances are very similar; the occasion of the redemption from that formidable anti-Christian power here referred to, had a strong resemblance to the rescue from Egyptian bondage.

As does Jamieson-Fausset-Brown Bible Commentary

song of Moses … and … the Lamb—The New Testament song of the Lamb (that is, the song which the Lamb shall lead, as being “the Captain of our salvation,” just as Moses was leader of the Israelites, the song in which those who conquer through Him [Ro 8:37] shall join, Re 12:11) is the antitype to the triumphant Old Testament song of Moses and the Israelites at the Red Sea (Ex 15:1-21). The Churches of the Old and New Testament are essentially one in their conflicts and triumphs. The two appear joined in this phrase, as they are in the twenty-four elders.

Our pastor preached on the Exodus plagues and the majesty of God this past Sunday. Our pastor has a Spirit-given talent for bringing the listener up to heights to glimpse up close the power and glory of God, which is itself if breathtaking and humbling. One becomes crushed after glimpsing Him through the exposition of scripture in sch a powerful way. After the sermon, I realized that as difficult as it is for me, who is saved, to see God as He really is (through scripture) that the lost people I know will meet Him in their own flesh. How like grass the flesh is! How they will be brought low, to wither as a match against a universal conflagration! When we ‘see’ God, we understand our own position in relation to Him, first as sinner worthy of all punishment, and then gratefully, as adopted sons and daughters of righteousness.

I recommend the sermon, if you have 40 minutes. It’s worth listening to. As for God’s work between the Old Testament and the New, from Egypt to the Tribulation-

But Jesus answered them, “My Father is working until now, and I am working.” (John 5:17)

Exodus and the Glory of God
What is the book of Exodus really about? We covered the heart of the book (with a brief summary of the whole) this week. Exodus is about God’s Glory in Salvation through Judgment.

May God and God alone be praised!!