In light of recent headlines, court cases, and cultural trends, over the past few months you’ve probably heard—or said—something like the following:

“Our culture is spinning out of control.”
“I can’t believe how fast the moral slide is happening.”
“We’re living in a different nation than the one I grew up in.”
“I think persecution of Christians is coming . . . soon.”

Without question, the cultural Christianity many of us grew up with has vanished. There is no collective Christian consensus wielding any significant power in this country today. In fact, the more that true Christians endeavor to speak and live biblically, the more we are being labeled as extremists, homophobic, and intolerant. Truly we are aliens. We foresee a day when being a faithful Christian will cost us or our children dearly, and in ways we couldn’t have imagined just a few years ago.

So is there any good news? Certainly. We know that God will use even the current hostilities and the climate of impending persecution for good (Romans 8:28). For years I’ve been concerned by the church’s pursuit of cultural change through political and social activities. Large swaths of Christians have placed enormous time, energy, money, and hope in the wrong things. Hand in glove with that thinking, a superficial, cultural Christianity has blurred the clear lines between the kingdom of heaven and the kingdom of this world. Pragmatists in evangelical pulpits have softened the hard demands of the gospel, making discipleship sound easy and grace sound cheap. As a result, churches have been filled with religious, superficially moral, self-righteous people who don’t understand the gospel and are self-deceived about their true spiritual state.

But with the façade of cultural Christianity shattered, biblical Christianity is beginning to stand out in a way it hasn’t in our lifetime. Scripture teaches and church history confirms that the Body of Christ is most potent and most effective when it simply speaks and lives the gospel without equivocation or apology. With the mask of superficial Christianity pulled down, I believe the best days for the spread of the true gospel are ahead of us.

Read more at the link.

With that said, though it’s true that as the cultural church shrinks and thus there are wonderful opportunities for the church global to share the Gospel and to show out living in a doctrinally pure manner, the moral purity of the Church leaves much to be desired. In a wonderful sermon of two parts, John MacArthur is preaching about Calling The Church To Repent.

There are two parts, and the transcript for both is coming soon. He is preaching from verses in the one place the Bible reveals where the Lord is calling the church to repent, Revelation 1:1-3. The warnings to those actual churches are also actual warnings to us today. The warnings were earned by the various churches due to a list of identified problems listed in the scripture. The churches’ problems were:

This is a list that should be familiar to all of us. Many churches, unfortunately, engage in one or more of these same issues that the first century Revelation churches were engaging in. No, we haven’t built a golden calf to worship idolatrously, but we have built football stadiums, paint ourselves like pagans, and skip church regularly during football season to cheer for sports instead of worship our God. We also worship ourselves, and we have constructed many other idols that compete with God. The rest of the church’s sins are exactly the same today, which is why they should be familiar to us now in the twenty-first century.

In his sermon, Dr MacArthur said that it’s unusual to hear of a pastor calling his church to repent. It’s even more unusual to hear of an entire church repenting, he said, or broken over their hypocrisy, or sorrowful over their compromise, or repudiating their tolerance of the pagan culture, and so on. Though many people think the safest place in the universe is the church, MacArthur said, it’s not so. Jesus is intensely interested in the church, and when He sees problems, He makes threats. This should be a concern to all churches claiming the blood of Christ, and all churches as a whole should do their utmost to adhere to biblical and moral purity.

Please tune in to the sermon and then go on to part 2. It’s worth it. 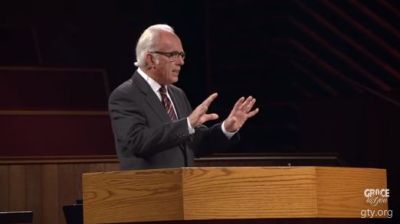 This episode is also available as a blog post: https://the-end-time.org/2021/10/15/this-woman-spoke-volumes-by-not-speaking/

my library, other view
My library
Dis/Contenment in your life and how to overcome it
It's taken a long time to go from stiff-necked, self-sufficient independent person to one who needs to boast in my weakness, sense my total inability, know my vulnerability & need for strength from Jesus every moment. And I'm still not there yet, which shows HOW deep in sin I was. But God...