Update at bottom: “Swaying every hour“

A powerful 7.3 magnitude earthquake occurred in Japan today, causing a landslide and 11 deaths. The large temblor was followed by a series of 5.7 and 5.4 magnitude quakes and other aftershocks as well.

It has been a busy week for quakes these last two weeks. After a period of several months of relative quiet, there have been 13 quakes in the 6.0-6.9 range. 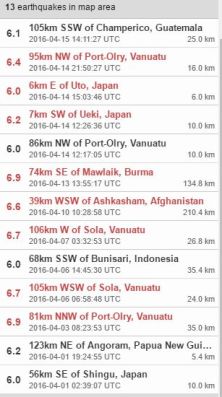 A more powerful earthquake has rocked the southern Japanese city of Kumamoto in the middle of the night, a day after an earlier tremor killed nine people. The magnitude-7.3 quake hit at a depth of 10km (six miles) at 01:25 on Saturday (15:25 GMT on Friday) in Kyushu region. At least three people died and hundreds were injured. A village has been evacuated after a dam collapsed, media reports say. (Source)

Rescue crews scrambled through rubble Saturday morning in a desperate search for survivors of a magnitude-7.0 earthquake that struck Japan’s Kyushu Island, the same region rattled by a 6.2 quake two days earlier. (CNN)

A small eruption occurred at Mt. Aso in southern Japan on Saturday around 8:30 a.m. local time (2330 GMT Friday) following a strong earthquake in the area, with smoke rising about 100 meters (300 feet) high, public broadcaster NHK reported. The Japanese Meteorological Agency kept its alert level at 2 on a scale of 5 for Mt. Aso, which has had eruptions in the past.
(Reporting by Chris Gallagher; Editing by Michael Perry)

One can but hope and pray for the soon return of Jesus Christ. Since the fall of man into depravity and sin entered the world, life has been a terrible cycle of disasters, diseases, and death

Can there be a stronger confirmation of what we read in Scripture, concerning the depravity of man? Can we conceive an employment more suited to gratify the malignity of Satan and the powers of darkness, if they were permitted to appear and act amongst us in human shapes? Could such enormities possibly obtain, if the mild and merciful spirit of the Gospel generally prevailed? But it shall prevail at last, and then the nations shall learn war no more (Isaiah 2:4).

How transporting the thought! That a time shall yet arrive, when the love of God and man, of truth and righteousness, shall obtain [shall prevail] through the earth. The evils (and these are the greatest evils of human life) which men bring upon themselves, and upon each other, by their wickedness, shall cease; and we may believe that the evils in the natural world will be greatly abated. Sin will no longer call down the tokens of God’s displeasure, by such public calamities as hurricanes, earthquakes, pestilence, and famine.