Last words on the national perversity of the SCOTUS decision, I promise. I have other things in the hopper for the next few days I want to write about. One can only opine so much, lol.

Yesterday I avoided all photos and news and social media regarding the terrible Supreme Court decision to allow legalized sodomite marriage in the US. However this morning I was listening to Reformation Network (Refnet.fm, a must listen-to radio station online! By Ligonier). I heard a great sermon and was eager for the next sermon, but in between was Al Mohler’s The Briefing. I rolled my eyes but I stayed with the channel. I’m so glad I did.

Dr Albert Mohler, Jr. is an “American theologian and the ninth president of The Southern Baptist Theological Seminary in Louisville, Kentucky” according to Wikipedia. He also has a radio broadcast called “The Briefing,” a daily analysis of news and events from a Christian worldview. He has an exceptional knack for distilling a wide range of news and drilling it down to what it means for Christians.

1. It’s worse for Christians. “Justice Clarence Thomas warned in his dissent of “ruinous consequences for religious liberty.” … Justice Samuel Alito stated bluntly that the decision “will be used to vilify Americans who are unwilling to assent to the new orthodoxy.”

2. It’s worse for marriage. “The Kennedy opinion opens wide a door that basically invites looming demands for the legalization of polygamy and polyamory. As Chief Justice Roberts observed: “It is striking how much of the majority’s reasoning would apply with equal force to the claim of a fundamental right to plural marriage.”

3. It’s worse for the Republic. “The Supreme Court’s over-reach in this case is more astounding as the decision is reviewed in full, and as the dissenting justices voiced their own urgent concerns. The Chief Justice accused the majority of “judicial policymaking” that endangers our democratic form of government.”

Listen to Special Edition of The Briefing or read the above article (it’s not the transcript) for context as to why each of those three will soon no longer be recognizable.

I know, no one wants to hear that the decision is much worse than we thought, because it’s already pretty bad. We want good news, we want to stay above the fray. I personally believe that this was a significant advance for satan, however. God lengthened the leash satan is on and it extended almost to the limit, perhaps. We are not to be unaware of his schemes, and we MUST be prepared. It is a spiritual battle after all, and though we don’t have to absorb every crumb of satan’s doings nor read every piece of news, this one above all is important to understand. The Briefing does that. Listen to it.

I truly believe that in listening to The Briefing Special Edition, however, and/or reading the transcript (when it’s up) or the linked article, that we are WELL on our way to becoming Sodom or Corinth.

God: We do not want You, Your ways, or Your law. We are our own creators, we are autonomous. We hate your good gifts—the gift of marriage, the gift of gender. We no longer want the joy of motherhood, fatherhood. We will make women husbands, men wives. We will twist and pervert everything that gives us life and light. Go away. Leave us alone.

God’s answer: as you wish.

He also posted this collage of iconic buildings or places in the US that celebrated and applauded (Romans 1:32) the nationalization of sodomy by splashing rainbow colored lights on them: 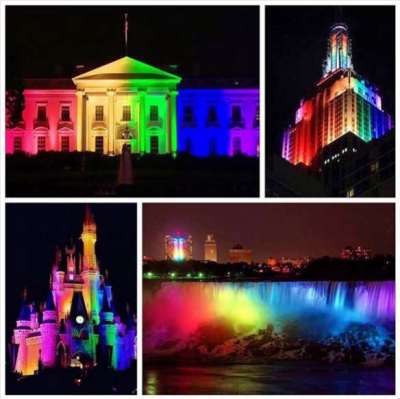 Really brings it home when you see rainbow-gay splashed coast to coast…Toto, we’re not in Kansas anymore.

However there is no need to panic.

For most evangelical leaders, today’s discussion of the nationwide legalization of same-sex marriage revolves around how best to express their dissent amid the legal uncertainties for churches and pastors.

“Outrage and panic are not the responses of those confident in the promises of a reigning Christ Jesus,” read a joint statement organized by the Ethics and Religious Liberty Commission (ERLC) and signed by more than 100 evangelical leaders, including David Platt, J. I. Packer, Richard Mouw, Jim Daly, Al Mohler, and Ron Sider.

“While we believe the Supreme Court has erred in its ruling, we pledge to stand steadfastly, faithfully witnessing to the biblical teaching that marriage is the chief cornerstone of society, designed to unite men, women, and children,” the group stated. [Full text]

Someone asked me about what to do in these last days to warn people about the era seemingly coming to a close. How do we warn? What should be our next steps? I responded this way:

I firmly believe that as the world darkens, the Light of Christ will shine brighter. To that end, I also firmly believe our responsibilities are still the same as they always have been since Pentecost, but to be pursued diligently and fervently knowing that we are that much closer to the rapture than Simon Peter was.

1. To remain prayerful. Connection with Jesus through prayer is our energy and power. It’s also commanded.

2. To remain in the word. Reading of and meditation on the word of God is how we keep our sword sharp. The word of God is the ONLY way to break the hardness of a Gentile’s heart and mind. It pierces. We plant the word and the Spirit grows it. But we can’t plant it if we don’t know it, and if we don’t know it we are exposed in this pitched battle that is life on earth. It pierces them, and protects us. And the battle is terrible these days, don’t leave your bible alone for even a day!

3. To find a local congregation, become a member, and to consistently worship there. Make sure to do our parts to use the Spiritual Gifts for the edification of the body. Every platoon at Boot Camp has soldiers who rely on each other, you would not want to para-jump from a plane where you know the person packing your parachute had skipped the class that day. So we go to church without skipping, involve ourselves in fellow believers’ lives, and we use the gifts the Spirit gave us for their edification and they for ours.

4. Speak frequently of prophecy. Not Illuminati/conspiracy/newspaper exegesis. But credible biblical prophecy. Many churches don’t want to or aren’t familiar with prophecy. I speak of the rapture often, and matter-of-factly. I also speak of the wrath a lot. Just because other people DON’T. I study the prophecies in Revelation and talk about them. I bring it up in conversation. The end matters!! If the creation in Genesis 1 is important to the faith and making one wise for understanding, so is Revelation’s UNcreation. As a matter of fact it is the only book of the bible that promises a blessing for reading it. So I try to be an example in fervency to diligently study all of God’s word (so when I exhort biblical truths people will listen because they know I’ve studied and I’m serious about living a holy life). Bring prophecy back into the mainstream, but not sensationally, not by date-setting, but by including it as a normal part of the bible student’s readings and interest. It’s been ignored too long.

5. Live a holy life and not one of hypocrisy. This is all-important, the more we are moral in Christ (not of our own strength) the more we will stand out in the world.

6. Be joyful! If we are just as worried about the way things are going as the pagans are, then we are no different! We have the joy of knowing the future, the peace in being reconciled to God, and the wonder of knowing Him through His word. Show it. That will speak loudly!

7. Witness with urgency, not just because of the last days, but because the person you’re speaking to may die in the next hour. Death (or rapture) comes suddenly and usually unexpectedly. Therefore don’t be afraid to say things like sin-wrath-judgment. God isn’t ashamed of His wrath, we should not be either. Removing all talk of wrath and sin and judgment takes the News out of the Good News. Witnessing is not “God loves you and has a great plan for you life.” If God already loves them then why change, and many people already like the plan they have for their life, again, no impetus to change. But every person has a conscience, understands morality and sin, and secretly wonders about heaven.

As for prophecy, I’m not writing books about last days signs and I’m not doing numerology to count secret codes and I’m not receiving new revelation prophecies from some kind of trumped up not-Jesus and I’m not on nationwide speaking tours or doing anything that’s any different than the usual Christian’s slog through the bible via hard work and application. Living to His glory is hard but we persevere in joy, and simply growing in holiness is the toughest of all in these days but if and when we do do, it is a beacon to the lost!

So in order to keep our light bright, we continue to look at Jesus. It’s very simple and it’s never changing.

Episode 350: Is it true that if I lived in Ancient Times I’d be able to focus better…? - The End Time Blog Podcast

Today I discuss former times and examine whether there really were fewer distractions to keep us from doing God's work as we have today. This episode is also available as a blog post: https://the-end-time.org/2023/01/30/is-it-true-that-if-i-lived-in-ancient-times-id-be-able-to-focus-better/

We might look wistfully back on days before technology and think that if we lived back then we'd be able to focus better with fewer distractions...but is that really true? We find a surprising letter from ancient Rome that challenges that thinking.
Treasures from J.R. Miller
Link in bio to the-end-time.org
threads
EPrata photo
Follow on WordPress.com