The Book of Acts is such a wonderful book to study. I’m fascinated by what the Spirit brings to mind each time I read through it. On Wednesday night we were studying the end of chapter 13 and the beginning of 14. I was thinking about Acts chapter 13, verse 42. Here are the rabbit trails I went down after I got home and in the succeeding two days 🙂

As they went out, the people begged that these things might be told them the next Sabbath. (Acts 13:42)

I started thinking of the reaction of people to the Gospel that Acts shows us. Shortly after the verse 42 was this one in v. 44

The next Sabbath almost the whole city gathered to hear the word of the Lord.

What a wonderful work of the Spirit! To ignite an entire city’s heart so that almost all of them turned out! I know that among the crowd would like be some rubber-neckers, others would be sent to spy on them (Gal 2:4) but still, almost an entire city eager and begging to hear of the Gospel. It blesses the heart and refreshes the mind to even think of such a thing happening today.

That thought brought me to another city that turned out to hear the message from God, this time, not Good News but Bad News: impending Divine wrath. Jonah preached only one day into a three-day walk sized city and immediately they were repenting already. (Jonah 3:3-4). Again, another amazing move of the Spirit.

Turning from those days to Enfield CT when Jonathan Edwards preached Sinners in the Hands of an Angry God, I was thinking of the Spirit’s lack of move in Edwards’ own congregation. He’d preached the same sermon to his own people but it fell like a lead balloon. When Edwards was invited to preach at Enfield, it had an immediate impact, the historically verified one we know of today.

The Dictionary of Bible Themes defines revival as

The soveriegn activity of God whereby he renews his people individually and corporately in vigour, affecting both sincerity of belief and quality of behaviour.

What seems to be the marks of a real revival? In looking at Antioch, Nineveh, and Enfield CT the same things are present: 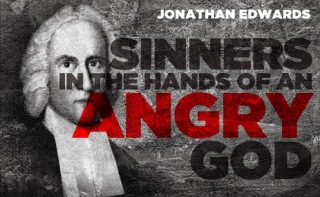 –demonic opposition (angry Pharisees, plots, riots, rejection. Even as Edwards was lauded for the sermon and people begged to hear it over and over from different pulpits to which he was invited, after a several-year fight he was dismissed from his own pastorate for trying to lead them away from the liberalism and compromise in the Half-Way Covenant).

It’s so strange to think of the Spirit’s move in masses of people. In Nineveh, widespread repentance. In Jerusalem, widespread rejection of Jesus and His followers. In Antioch, widespread acceptance (at least, a curiosity without rancor). In Lystra, they drove Paul out and stoned him. In June 1741 in Northampton, Edwards’ sermon was received without murmur. A month later in Enfield, they tore their clothes and begged to be saved.

It seems that after repentance, the very least one should see in a genuinely converted or revived person or corporate entity is eagerness to hear the Word preached, to study it, and proclaim it. After that, one should expect to see lives that align with the repentance they professed, in the form of a personal hatred of sin and progressive sanctification as their old man dies and the New Man is growing in them. Last, one should expect to see perseverance of the saints. The genuinely revived or converted will not fall away

The wind blows where it wishes, and you hear its sound, but you do not know where it comes from or where it goes. So it is with everyone who is born of the Spirit.” John 3:8

The Spirit sends his influences where, and when, on whom, and in what measure and degree, he pleases. Though the causes are hidden, the effects are plain, when the soul is brought to mourn for sin, and to breathe after Christ.

3:8 wind The Greek word pneuma can mean “wind,” “breath,” or “spirit.” John uses the metaphor of the wind as a power that is felt but unseen to explain the power of the Spirit of God. This echoes God’s Spirit hovering before His creative works began—providing credence for the Spirit that Jesus initiates among all believers being one with God the Father as well (1:2). The creative act of God will enter people, becoming the source of their transformation back into God’s image.

The Holy Spirit’s work in salvation individually or corporately, is a wondrous strange thing.

Lord Jesus, I sin. Grant that I may never cease grieving because of it, never be content with myself, never think I can reach a point of perfection. Kill my envy, command my tongue, trample down self. Give me grace to be holy, kind, gentle, pure, peaceable, to live for Thee and not for self, to copy Thy words, acts, spirit, to be transformed into Thy likeness, to be consecrated wholly to Thee, to live entirely to Thy glory. Valley of Vision

Episode 350: Is it true that if I lived in Ancient Times I’d be able to focus better…? - The End Time Blog Podcast

Today I discuss former times and examine whether there really were fewer distractions to keep us from doing God's work as we have today. This episode is also available as a blog post: https://the-end-time.org/2023/01/30/is-it-true-that-if-i-lived-in-ancient-times-id-be-able-to-focus-better/

We might look wistfully back on days before technology and think that if we lived back then we'd be able to focus better with fewer distractions...but is that really true? We find a surprising letter from ancient Rome that challenges that thinking.
Treasures from J.R. Miller
Link in bio to the-end-time.org
threads
EPrata photo
Follow on WordPress.com