CDC confirms first case of Ebola in US

The Centers for Disease Control and Prevention (CDC) confirmed on Tuesday that a patient being treated at a Dallas hospital has tested positive for Ebola, the first case diagnosed in the United States. The patient left Liberia on September 19 and arrived in the United States on September 20, CDC director, Dr. Tom Frieden told reporters at a press conference Tuesday. It’s the first patient to be diagnosed with this particular strain of Ebola outside of Africa.“[The patient] had no symptoms when departing Liberia or entering this country. But four or five days later on the 24th of September, he began to develop symptoms,” said Frieden. The patient, who was in the U.S. visiting family in Texas, initially sought care on September 26, but was sent home and was not admitted until two days later. He was placed in isolation at Texas Health Presbyterian Hospital of Dallas, where he remains critically ill, according to Frieden.

The assurances we’ve been receiving from officials since the outbreak in Africa spread have not made much sense to me.

“The risk of the spread of Ebola in California is low.”

“and the past-president of the National Foundation for Infectious Diseases, told weather.com Americans should not fear the disease. “We see the risk as essentially zero,”

If an ill traveler arrives in the U.S., CDC has protocols in place to protect against further spread of disease.

The problem is, the patient in Dallas was not showing any symptoms. Secondly, he had traveled to Liberia and when he arrived at the Dallas hospital for treatment, he was sent home. It doesn’t seem those protocols are working.

Granted, one patient isn’t an outbreak. But the worry is that he was ill, AND showing symptoms and walked around Dallas for days. The CDC press conference last night never did answer the question as to whether the patient’s family has been quarantined. However, several medical workers are now quarantined:

DALLAS — Three Dallas Fire-Rescue paramedics and several emergency room workers at Texas Health Presbyterian Hospital are off work and under observation after making contact with the patient being treated for Ebola. Perhaps the most tangible evidence of Ebola in Dallas is an ambulance parked in a city lot in Pleasant Grove, an area about 15 minutes southeast of downtown Dallas. It’s quarantined and roped off with red tape warning of a biohazard. Ambulance No. 37 carried the Ebola patient to Texas Health Presbyterian Hospital on Sunday morning.

So on September 26 the patient walked into the hospital seeking care, and just three days later had to be taken by ambulance. It seems that this is either a very rapid progression, or symptoms were evident on the 26th and were missed. Neither scenario are particularly comforting.

But the CDC assures us, still, that everything is just fine. But just in case, they issued Ebola guidelines for US funeral homes. The article’s opening poses the following question:

ROSWELL, GA (CBS46) – CBS46 News has confirmed the Centers for Disease Control has issued guidelines to U.S. funeral homes on how to handle the remains of Ebola patients. If the outbreak of the potentially deadly virus is in West Africa, why are funeral homes in America being given guidelines?

They asked the question because the article was initially published on September 29. The news did not break about the Dallas Ebola patient until September 30. Now we know the answer.

All I can say is that the same thing is on many peoples’ minds. First is Mark Davis’ tweet

Fred Butler summed it up.

An impressive hail storm slammed into the Denver metropolitan area around 2 p.m. MDT, dropping hail as large as golf balls. Photos posted to social media show what looked like snow, but was actually a thick sheet of hail covering highways and grassy areas. Denver’s 9 News reports Cherry Creek schools delayed dismissing students because of the weather. Hail drifts several feet deep were reported in some towns, according to AOL.com.

Scientists are grappling for reasons as to why the weather is worsening so palpably. This is from NOAA weather:

4.2 is pretty big for Oklahoma. 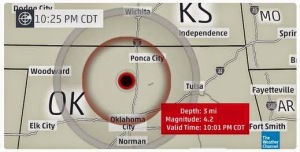 Mammoth Lakes in California has been experiencing the “most intense” quake swarm of the last decade. LA Times has mapped them in a .gif

Mount Ontake, a Japanese volcano, erupted unexpectedly, unfortunately killing and injuring climbers. A hiker who was on scene filmed the terrifying event. Below is a screen shot and below that, the video.

The search for at least two dozen victims of Japan’s worst volcanic eruption in decades has been called off again today amid fears that another deadly steam explosion is imminent. Hundreds of military searchers had been preparing to enter Mount Ontake by foot and helicopter to resume the recovery of at least 24 people caught in a deadly rain of ash and stone after the peak erupted without warning on Saturday when it was crowded with hikers, including children. Twelve bodies have been recovered from the 10,062 feet peak but at least 36 are feared to have died, with the recovery hampered by high levels of toxic gas and ash piled hip-high in places on the still-smoking mountain. At least 69 people have been injured, 30 of them seriously.

Mt. Sinabung in Sumatra let out a long roar on Wednesday, erupting for a full 907 seconds, or just over 15 minutes – about 0.0028% of the year since it first started acting up. Daily eruptions, which started last November and lasted for months, coated the countryside in gray ash and forced tens of thousands of people from their villages.

A Florida pagan was given the opportunity to offer the invocation at an Escambia County Commission meeting Thursday, but one commissioner wouldn’t stick around to hear it. By law, the commission had to allow David Suhor, a self-described Agnostic Pagan Pantheist who worships nature, to give an invocation, according to ABC affiliate WEAR-TV. When Suhor recited the pagan prayer in song calling of the directions north, east, south, and west, Commissioner Wilson Robertson walked out. “People may not realize it,” Robertson told WEAR. “But when we invite someone, a minister to pray, they are praying for the county commissioners, for us to make wise decisions and I’m just not going to have a pagan or satanic minister pray for me.”

Good for him. The law may require that equal opportunity be given to all religions, but that does not mean we have to accept the prayer in the ‘spirit’ in which it was intended. I hope the commissioner prayed for the pagan man to repent and come to Jesus.