“…what is in the mind cannot be questioned.”

The above statement was from Dr. Paul McHugh, former psychiatrist in chief at Johns Hopkins Hospital, and the author of “Try to Remember: Psychiatry’s Clash Over Meaning, Memory, and Mind”.

It is from an excerpt from an Opinion-Editorial article that appeared in the Wall Street Journal last week by Dr. Paul McHugh, formerly head psychiatrist at Johns Hopkins University. [HT Stand to Reason Blog] from which the above was taken. Their title was “Why the First Hospital to Do Sex-Reassignment Surgeries No Longer Does Them”

I thought Dr. McHugh’s point about anorexia and bulimia was especially poignant. The comment about the 20-fold higher suicide rate of surgically transgendered patients in latter years having ‘no explanation’ was also poignant. 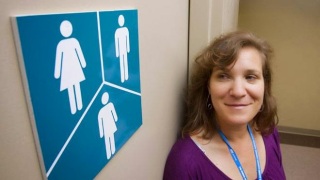 Halifax, Canada: “The familiar stick figures remain, so as not to confuse anyone used to looking for them to point the way to a washroom. But now Capital Health has added a third figure to the signs on some of its single-stall bathrooms in Halifax to represent transgender people, in a move designed to signal a welcoming environment to gay, lesbian, bisexual and transgender individual.”

Satan actively seeks moral decline. He seeks it in the individual and he seeks it in society. In attacking the family satan has had success in bringing about an acceptance of divorce, and an acceptance of homosexuality- at least as it’s presented in the news and the media. The next frontier for acceptance of perversity is transgenderism, and polyamory (Multiple wives, or multiple partners under one roof.)  If satan can corrupt the marriage institution and pervert the nuclear family, thus normalizing terrible sin, he will have accomplished his goal, which is to rebel against God’s holy standards. Getting an entire society to rebel is icing on the cake. (Romans 1:32).

Dr McHugh’s information is of interest because transgenderism is the next frontier of satan’s active battlefield. The cherry on top of the icing on the cake is that after getting individuals to fall, and after getting a culture to fall, is to get these perverted notions accepted by the church. It has been an onslaught lately.

Several weeks ago, a church identifying as Southern Baptist repudiated the biblical standard for sexuality and voted to keep a pastor who’d reversed his position on homosexuality as a sin. The reason for the pastor’s change of heart? His son came out as gay, and rather than repudiate the sin in his son and go through the Matthew 18 process, the pastor chose to repudiate Jesus instead. His church voted to keep the gay-affiring pastor, thus the congregation repudiated Jesus also. In these cases I am reminded of Revelation 3:20. Jesus is outside the door of the church, knocking to come in.

The Presbyterian Church USA voted this week to change their constitution declaring marriage as a union between two people, rather than specifically between a man and a woman.

In the face of the swelling tide of gender role and sexual reversals, last week the Southern Baptist Convention passed a resolution stating in part, “The separation of one’s gender identity from the physical reality of biological birth sex poses the harmful effect of engendering an understanding of sexuality and personhood that is fluid.“

And this piece by Dr McHugh agrees, medically, biologically, and psychologically. Transgenderism is in the mind, it is a desire, an appetite. It is a disorder, not a biological reality.

Acknowledging transgenderism as a sin and not a disorder does not diminish the pain and anguish the gender confused individual possesses. However the glory of the Gospel is that Jesus died to pay for all sins, and to bring peace between Himself and sinners. Any and all sin, confusion, and anguish can be covered and helped by repentance and submission to the Great and Holy Comforter. He is a man of Sorrows Himself, understanding our pains and woes. He will help. Repentance, means a true rejection of one’s sin, and in this case pleas to Jesus will be heard. It doesn’t mean that one’s anguish over sin will be immediately dissolved, but He sends a Helper in the Holy Spirit to aid us in resisting temptation. More than that He gives us HOPE, and changes our focus from self  to Him, that is always the greatest and most magnanimous place to start the path to true peace.

[P]olicy makers and the media are doing no favors either to the public or the transgendered by treating their confusions as a right in need of defending rather than as a mental disorder that deserves understanding, treatment and prevention. This intensely felt sense of being transgendered constitutes a mental disorder in two respects. The first is that the idea of sex misalignment is simply mistaken—it does not correspond with physical reality. The second is that it can lead to grim psychological outcomes.

The transgendered suffer a disorder of “assumption” like those in other disorders familiar to psychiatrists. With the transgendered, the disordered assumption is that the individual differs from what seems given in nature—namely one’s maleness or femaleness. Other kinds of disordered assumptions are held by those who suffer from anorexia and bulimia nervosa, where the assumption that departs from physical reality is the belief by the dangerously thin that they are overweight….

Psychiatrists obviously must challenge the solipsistic concept that what is in the mind cannot be questioned. Disorders of consciousness, after all, represent psychiatry’s domain; declaring them off-limits would eliminate the field….

We at Johns Hopkins University—which in the 1960s was the first American medical center to venture into “sex-reassignment surgery”—launched a study in the 1970s comparing the outcomes of transgendered people who had the surgery with the outcomes of those who did not. Most of the surgically treated patients described themselves as “satisfied” by the results, but their subsequent psycho-social adjustments were no better than those who didn’t have the surgery. And so at Hopkins we stopped doing sex-reassignment surgery, since producing a “satisfied” but still troubled patient seemed an inadequate reason for surgically amputating normal organs.

It now appears that our long-ago decision was a wise one. A 2011 study at the Karolinska Institute in Sweden produced the most illuminating results yet regarding the transgendered, evidence that should give advocates pause. The long-term study—up to 30 years—followed 324 people who had sex-reassignment surgery. The study revealed that beginning about 10 years after having the surgery, the transgendered began to experience increasing mental difficulties. Most shockingly, their suicide mortality rose almost 20-fold above the comparable nontransgender population. This disturbing result has as yet no explanation but probably reflects the growing sense of isolation reported by the aging transgendered after surgery. The high suicide rate certainly challenges the surgery prescription….

At the heart of the problem is confusion over the nature of the transgendered. “Sex change” is biologically impossible. People who undergo sex-reassignment surgery do not change from men to women or vice versa. Rather, they become feminized men or masculinized women. Claiming that this is civil-rights matter and encouraging surgical intervention is in reality to collaborate with and promote a mental disorder.

For certain individuals whose condemnation was written about long ago have secretly slipped in among you. They are ungodly people, who pervert the grace of our God into a license for immorality and deny Jesus Christ our only Sovereign and Lord. (Jude 1:4)

And yet, our gentle Lord encourages us with this verse,

But you, beloved, building yourselves up in your most holy faith and praying in the Holy Spirit, keep yourselves in the love of God, waiting for the mercy of our Lord Jesus Christ that leads to eternal life. (Jude 1:20-21)

Transgendered Chastity Bono and “Dancing with the Stars”

What does the Bible say about transsexualism / transgenderism? Is gender identity disorder / gender dysphoria the result of sin?”

Focus on the Family position on Transgenderism